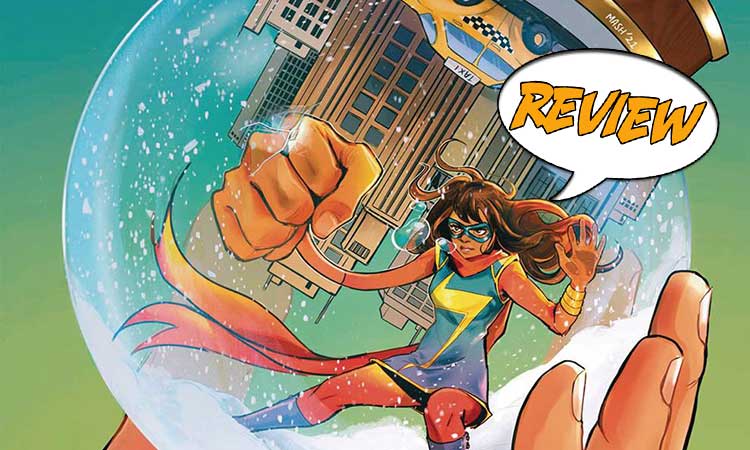 Ms. Marvel: Beyond the Limit #4 Review

Kamala realizes there may be a connection between the attack on Razia’s lab and Qarin’s appearance. Can she stop Qarin from using her own powers against her? Find out in Ms. Marvel: Beyond the Limit #4 from Marvel Comics.

MS MARVEL: BEYOND THE LIMIT #4

Previously in Ms. Marvel: Beyond the Limit: Kamala comes face to face with her doppelganger, a young woman named Qarin who comes from another universe. She also saw the entire Bollywood illusion that Kamala experienced. Kamala’s friends talk her into letting Qarin stay with her, and her parents are happy to oblige. They get off on the wrong foot when Qarin not only sleeps in Kamala’s bed but also shifts into her form at breakfast and hangs out with Kamala’s friends. Kamala has not been feeling well since the break-in at the lab, and Qarin doesn’t seem to realize that her powers are at all special. Another lab break-in occurs, and Qarin not only rushes off, she catches the guy in the trench coat. And then she blames Kamala for the deal of her Earth’s Ms. Marvel!

Ms. Marvel: Beyond the Limit #4 opens again with Kamala and Qarin facing off. Qarin puts Kamala into a giant snowglobe that she is unable to break out of. Kamala also saw the images Qarin talks about at Razia’s lab. She feels the tingle she’s been having and realizes it is because of Qarin, and the two of them have some sort of connection. Unstoppable Wasp (Nadia Van Dyne) arrives, following the tracker she put on the trench coat guy, to see two Ms. Marvels, one slowly being buried in fake snow and one punching the daylights out of the trench coat guy. Which one is the evil doppelganger, and how can Kamala convince Nadia that it is not her?

Qarin attacks Wasp. When Wasp strikes back, it saps some of Qarin’s strength and Kamala gets stronger until she can crack the globe a little. Qarin counters by actively trying to take Kamala’s power.

Finally, we flashback to Qarin’s Earth a few days ago. It’s a futuristic-looking place, and when she meets up with some other students, they talk about how the world hit its zero-waste goal early. This is an optimistic world where people of many nations and cultures have been working together to help the planet. Their Ms. Marvel is Marvel-Ji who visits Qarin’s school to launch their new zero-waste engines. Qarin adores Marvel-Ji.

In her speech, Marvel-Ji says that they can all be heroes. Qarin perhaps takes this a little too much to heart. When a strange portal opens up, Qarin walks toward it. As it bursts open, Marvel-Ji rushes to pull her back, only to get caught in it herself. Her last words are that something is stealing her energy. Looking through the portal, Qarin sees her world destroyed. Then parts of her body start embiggening. Then she has the same experience Kamala had in Razia’s lab.

When things settle down, she is on Kamala’s Earth. Her world, as far as she knows, has been destroyed and now strange things are happening to her. And who is the strange young woman she saw who is not Marvel-Ji?

ALIKE YET NOT ALIKE

The art of Ms. Marvel: Beyond the Limit #4 is energetic and supports the story well. The giant snowglobe filling with artificial snow is a creative touch, certainly dangerous but with a sense of goofiness. I like Wasp’s earnest expressions as she tries to determine which Ms. Marvel is the real one which contrasts with Kamala’s frustration – proving that you are who you are is honestly difficult.

It was interesting to see Qarin’s Earth and a bit of her life. She appears to live in Asia in a lush tropical zone. The hints of architecture we see at her home and school are clean and organic in form with a lot of plants indoors as well. The kids she goes to school with are diverse. While their clothes are all color-blocked in gray and white, the styles are all different. This may be a future of modernistic jumpsuits, but they look like they have comfortable options. This is an optimistic version of Earth in many ways, and to see it firsthand helps us feel Qarin’s grief and anger about being stranded on Kamala’s Earth.

Now that the goofiness has settled down, Ms. Marvel: Beyond the Limit #4 brings loose ends together to reveal that there are connections, stakes, and consequences. Everything that happens touches on Kamala directly and rapidly so it makes sense that she is involved. I’m excited to see how it all turns out!

Ms. Marvel: Beyond the Limit #4

Kamala’s powers are acting up, but she has a problem to deal with regardless.