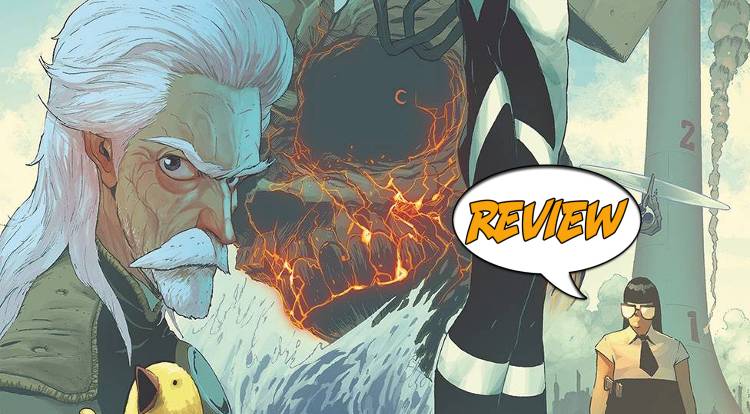 What is OHM? Is it a technological miracle? Or an existential nightmare? Your Major Spoilers review of Ghost Cage #1 from Image Comics  awaits!

Previously in Ghost Cage: When his megacorp power plant falls under attack by terrorists, Mister Karloff, the super-scientist who revolutionized (and controls) all energy on Earth sends his ultimate creation (and also an adequate employee) in to destroy his most monstrous secrets.

We begin with a power outage. As a megacity goes dark, the only building still illuminated is Ohm Tower, the headquarters of the electric company (not THAT Electric Company). Within the darkened chambers of Ohm, a holographic representation of the company’s founder activates Sam, an advanced android, and launches him into (what may be) the center of the dynamos that power Ohm, and by extension, the world. At the same time, a low-level employee named Boyle is activated and sent into the same area by Ghost Bud, the company’s holographic mascot. Sam fights Coal, a giant embodiment of… I dunno, fossil fuels? When the android is damaged, Doyle’s job is to patch it up and protect its functions, leading to a second battle against Water. That one goes much less well, and by the end of the issue, it’s Boyle who is leading the charge to find the secrets behind Ohm’s energy monopoly. But what’s with the mysterious armored woman who is stalking them through the tunnels?

IN THE MANGA TRADITION

This issue reminds me of nothing so much as Akira, which is high praise from anyone who counts as Generation X. The clear depth of development behind this story is impressive, and the reveal of bits and pieces of the lore and motivations is skillfully done, even if this first installment is a little bit baffling. There’s no coddling or infodumps here, just a hologram constantly getting Doyle’s name wrong and a robot whose head is a human eye. There’s clearly more than just an adventure here, but I’m not entirely sure what the giant embodiments of coal and water power are meant to represent. That’s not necessarily a problem for me, though, thanks to Dragotta’s detailed old-school manga-style art. Each panel is full of little touches to admire, and whether or not I understand why there’s a canary being resurrected on panel, I can’t help but be stunned at how remarkably well-drawn it is.

I think my biggest complaint about Ghost Cage #1 is the point where the story ends, making me wish that it was presented in the long-form that the manga books it reminds me of are presented, but the incredible art combined with the methodical reveal of the story elements makes for a book I couldn’t put down, earning 4.5 out of 5 stars overall. In the grand scheme of things, “I wish I had more of this story right now” is a low-severity complaint.

We're dropped in the deep end without water wings, but the effect is engrossing and the art is remarkable. I'm looking forward to more of this book.