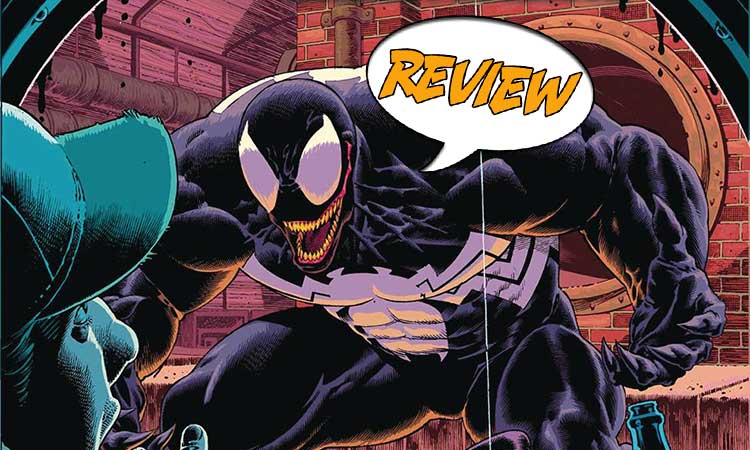 Long ago, Venom was a simple Anti-hero with two goals, saving the innocent and killing Spider-man, see how that goes. Your Major Spoilers review of Venom: Lethal Protector #1, awaits!

Previously in Venom: Lethal Protector, before Carnage and space gods, clones and toxins, and the revelation that he was a father, Eddie Brock was a down-on-his-luck reporter who had tried to take his own life and been saved by an extraterrestrial alien.

Venom: Lethal Protector #1 opens up with Venom in the middle of a fight with a trio of villains who had been stalking him. The fight doesn’t last long before the villains retreat. Elsewhere a man catches the news report of the fight and gets an idea. He then dusts off a costume of his own and takes on the name of Humbug. In a different part of the city, Eddie and his symbiote friend wax poetic about their predicament and their wants. They then see an old lady get mugged and intervene, to very little fanfare. Humbug tracks down the villains from the beginning and tries to join them, revealing his powers to emit the sounds of bugs. The team rejects his offer and sends him packing. After a rough night, Venom decided to try and find Spider-Man to kill him as a way to shake his depression. While searching he encounters Humbug and their fight leaves Eddie more alone than he’s ever been.

A LOVING TRIBUTE, TO A FAULT

Everything about Venom: Lethal Protector #1 feels like a callback and homage to the comics from the days when Venom first got his own book. Like many series’ from the time the dialog is dramatic, overwrought, a bit cheesy, and filled with a ton of unnecessary details that are designed to “sneak” in back story, While this may sound like a knock against the writing, it actually is kind of endearing. This comic feels as if a Venom story was done by a group of enthusiastic community theater actors, which is enjoyable in its own way. The plot of this issue hides a bit of complexity that was unexpected. There are a lot of players, from Venom and Humbug, to the other villains, there’s even a shady science lab in the picture, complete with slimy CEO wearing slick sunglasses. While there are a lot of things about this that bring back days gone by, it’s questionable whether a reader who is unfamiliar with these older styles of comics will appreciate this issue as much.

THAT’S A LOT OF MUSCLES

The art in Venom: Lethal Protector #1 follows the writing’s lead by being reminiscent to mid-90s comics. The colors are vivid, while everyone is good-looking, from Eddie to the bad guys, to an elderly homeless man. On top of that all the body proportions are taken to the extreme, especially Eddie, who looks like a pile of biceps with a face slapped on it. It’s not a bad comic to look at, but it’s not going to be everyone’s cup of tea.

There’s a lot to enjoy about Venom: Lethal Protector #1, especially if you have a fondness for comics from the 90s. Things are over the top and intense while also being a bit zany and tongue-in-cheek. At times though this can come off more as a reminder that there were reasons comics evolved from the 90s stylings, for a reason. 3 out of 5 stars.

Venom: Lethal Protector #1 is a comic that’s steeped in 90s nostalgia. The dialog and art is over the top in ways that aren’t always good, but the plot is entertaining and has a lot of potential.