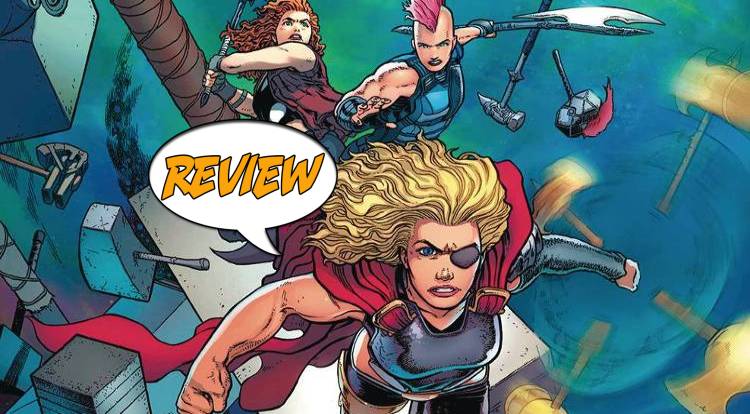 The Black Skull has taken the upper hand once more, but the Goddesses of Thunder are incoming, and even a symbiote should watch its back. Your Major Spoilers review of Avengers Forever #4 from Marvel Comics awaits!

Previously in Avengers Forever: Atli, Ellisiv, and Frigg are the granddaughters of Old King Thor, last seen before Grampa became the herald of Galactus. Now the Goddesses of Thunder are back, sailing the wild cosmic seas, chasing the thunder that echoes across universes…  and hunting for fallen hammers.

At the end of time, the granddaughters of Thor are stunned to see their forebear’s hammer, left on the battlefield years before, start to levitate and glow. The accompanying storm calls to each, sending Atli the call to war, Ellisiv the sounds of pain, and Frigg the echoes of an ancient fear. Harnessing their ship to Mjolnir, the Goddesses Three are pulled through the veil of reality, suddenly appearing on Earth-818, where we saw an army of Black Skull alternates appear in the last issue. Having found a piece of the Last Phoenix (it’s his left arm, with the claws still intact, which should tell you who we’re discussing), they find another in the midst of the battle between Ghost Rider, Deathlok, and the Avengers of this world, engaging the battle they find. Using his newfound mastery of symbiotes, Ghost Rider channels the powers of the All-Rider and throws each would-be Skull back to their own worlds, allowing the heroes that remain to reclaim the wasteland that is their planet. With a little help from the Asgardians, Earth-818 sees the first new growth since the Black Skull’s conquest, while Ghost Rider, Dethlok, and The Invincible Ant-Man set off to free the next reality.

ONE WORLD AT A TIME

I have to be honest, after the first three issues, the sudden end of the Earth-818 story this issue feels VERY abrupt. Making things feel even more disjointed, Thor’s descendants are the ones who turn the tide, meaning that the big battle with the Skulls of multiple realities ends with a literal deus ex machina. The final page, showing that Moon Knight and The Vision weren’t lost after all, but have landed in a world where they are greeted by Captain America Peggy Carter, Longbow of Morgan le Fey’s Queen’s Vengeance, and a War Machine that I don’t recognize, is enticing, as is Ant-Man’s decision to accompany Robbie and Deathlok across the dimensions, but the sudden end of this story is still off-putting. This issue’s art isn’t bad, but Towe’s work is different enough from Aaron Kuder’s to make this feel like a completely different series. The claustrophobic dystopia of Earth-818 we saw established in previous issues doesn’t feel much different from the world where Atli, Ellisiv, and Frigg live, or even standard Earth-616.

The first three issues of the book feel like the setup for a six-issue arc, but Avengers Forever #4 wraps things up too quickly for that extensive setup, with art that is fine, but lacks the dramatic punch of Kuder’s works, dulling the effectiveness of the storytelling a bit, earning a still better-than-average 3 out of 5 stars overall. I still want to see where the next world takes this group of Avengers, but if we get another story this anticlimactic, that might change.

After several issues of deliberate plotting (including one that all torture), Earth-818 is saved by a trio of goddesses who haven't been in the story, save for a single-page splash at the end of issue #1, wrapping up a big story with sudden snap.