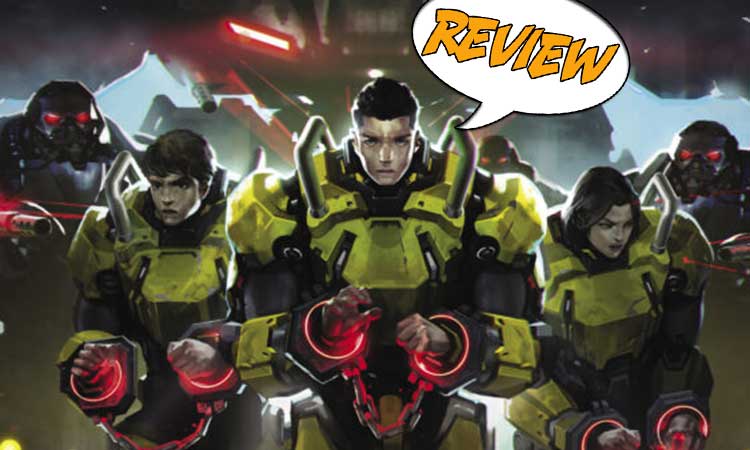 A devastating attack and theft at a mining outpost lead to questions and conflict. Will Peris’s defiance lead to further trouble? Find out in Armorclads #1 from Valiant Entertainment.

Previously in Armorclads: In a distant solar system, nations and planets battle using Armorclads, exoskeletal armor. But it is the workers who use the construction-class mechs known as Ironclads who mine the mineral known as The Pure. These workers are practically expendable, but maybe that is about to change.

Armorclads #1 opens on the planet Xeru where The Pure is mined. A group of people in mech suits travel with a shipment, presumably of this rare mineral, when they get advance warning of something approaching. A firefight begins.

At Outpost 12, a group of workers suit up for the day as they watch a video of a guy reminding them that their work is important for the people of Alpharon to be able to live a good life. They may be genetically engineered for this work, he continues, but they aren’t really enslaved. With hard work, they might be able to earn their freedom. Our main characters are Peris, Sam, and Lela, but they’re also known by their numbers. They are Ironclads, and their mech suits are not as tough or as fancy as the other people were wearing.

Other people such as the guards in the opening scene, or as in their overseer. He calls the workers “grubs” and tries to hurry them along. When they talk about going out for a drink after work or complain about the boss, he orders them to shut up. Of the three, Sam is the most rebellious. When he heads off to investigate a possible better vein of Pure, the unstable wall collapses on him. Peris wants to save him and is ordered not to. When he tries anyway, the mobility in his suit is turned off. The line about them not being enslaved rings very hollow.

Later, an overseer takes a group of Ironclads out to the woods to an area where a bunch of trees have been knocked down. As a helmet falls from above, the overseer finds the remains of the convoy, the wagons looted of their cargo, and the armored guards lying dead. He orders the grubs to come up and help him as several bug-like creatures descend on him. Peris orders the Ironclads to stay put, using the same reason that the Sergeant used for not rescuing Sam – that they could not risk losing more than a single suit, an act of defiance that they follow.

After the Sergeant is dispatched, the bugs turn on them and Peris organizes a counter-attack. They may not have weapons, but they have mining tools and they know how to work together as a team, succeeding in driving the bugs off. Then they investigate the fallen guards. They were not killed by bugs; they took fire. Sergeant Troy’s radio crackles into life and Peris briefly reports that he was killed. The Ironclads are ordered back to the Outpost.

It is the end of the workday, and the propaganda continues praising them for their hard work, so the life on Alpharon can continue to be idyllic. And one day, they will be able to join them. But Peris doesn’t think he knows anyone among the miners who has ever made it to Alpharon.

A DIFFICULT AND ISOLATED LIFE

Armorclads #1 sets up a world that has at least two distinct tiers. The Armorclads and the Ironclads are both mechs, but they are worlds apart in power as are their operators. The Armorclads look solid and nearly invulnerable. They are armed with powerful weapons. They are also anonymous. We see the faces of only a couple of them. Together they appear to us a monolithic force that doesn’t seem human.

In contrast, we see the faces and bodies of the young people who are the Ironclads. They look young and some of them even look downright skinny. Their youthful faces seen tired even before their shift starts. Their mechs look strong, but they look like there are fitted out exclusively for work, not for combat. They bear tools rather than weapons. They look older, battered, well-used. This contrast makes it even more unsettling that the group of Armorclad guards were killed in their battle.

Armorclads #1 takes a narrow focus on an outpost on Xeru and sets up in microcosm a conflict that echoes that of the larger civilization around them. It’s a grim world, and I wonder about the consequences of the workers’ actions.

“The Pure” may save lives, but it cost the life of a young miner, and the lives of several guards.