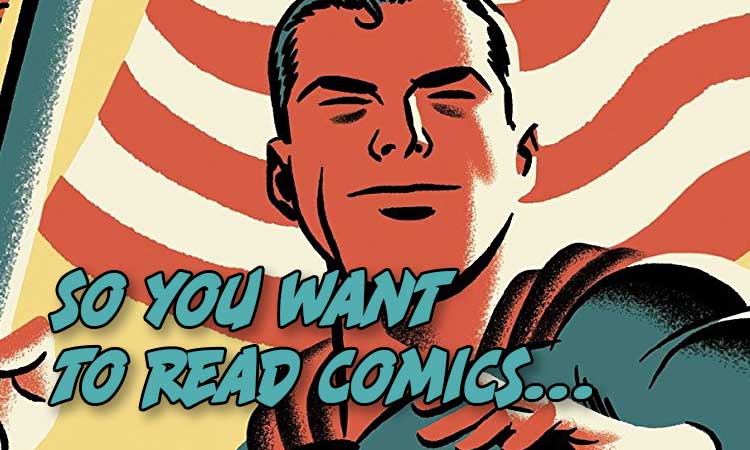 So You Want To Read Comics: Golden Age Edition

Stay golden Pony Boy, it’s time for “So You Want To Read Comics”.  This is our weekly feature where we take a look at a single topic or genre, then give you two comic book recommendations, perfect for new readers, based on that topic or genre.  This week we’re taking a look at the Golden Age of Comics.

As you start to get more and more into comics and perhaps start to engage with the fandoms and communities tied to this hobby, there are terms you might hear.  Specifically, you might hear mention of certain ages in comics, such as the silver age, the modern age, or the subject of this week, the golden age. Now, by no means is knowing this stuff necessary to enjoy comics, but it might enhance things if you’re into it.  It’s mostly agreed upon that The Golden Age of Comics is a period between 1938 and 1956.  It was during this period that the concept of the superhero becomes a popular thing, some of the most popular figures in American pop culture are created, and comic books are used as propaganda tools.  Many of the concepts developed during this time have gone on to become the standard for what people think of when they think of comic books.

So, where do you start if you are interested in reading the foundation for what much of this hobby is based on?  Here are a couple of suggestions.

In 1938, Jerry Siegel and Joe Schuster would create a character known as Superman, effectively creating the superhero genre and changing the world forever.  While there was other stuff going on in comic books at the time, it was this one character that would pave the way for nearly a century of stories featuring people with otherworldly talents and abilities.  What’s really interesting about these early stories is how many of the familiar aspects of the character are missing.  There’s no kryptonite here, no Justice League, he can’t even really fly yet. What’s also interesting is the type of villains Superman faces, rather than the typical super-powered menaces we’re used to seeing Superman’s face, it’s corrupt businessmen, low-level thugs, and other enemies of the lower to middle class. Within a year of his creation, many other familiar faces would appear, but it all starts with Clark kent here.

Back in the 30s and 40s, there was no shortage of comic book publishers out there.  With each one trying to capitalize on the increased popularity of the format.  One of these companies was Timely Comics, a publisher that would later get rolled into a little company known as Marvel Comics.  But long before anyone heard of The Avengers or The X-Men, there was the All-Winners, a group of Timely’s biggest characters.  Now, this group didn’t just fight thugs and criminals, these heroes actually went overseas to fight in World War II.  Many of these comics were designed to be stories to boost morale both at home and among the soldiers on the frontlines as well as entice young people to enlist.  Of course, these stories are dated and a bit problematic, but when you look at some of the creators involved like Stan Lee, Jack Kirby, and Joe Simon (just to name a few), names that would go on to create some of the most memorable comic book creations ever, there’s no denying its place in the history of comics.

What are some of your favorite Golden Age comics?  What do you think of these recommendations?  Let us know in the comments section below.