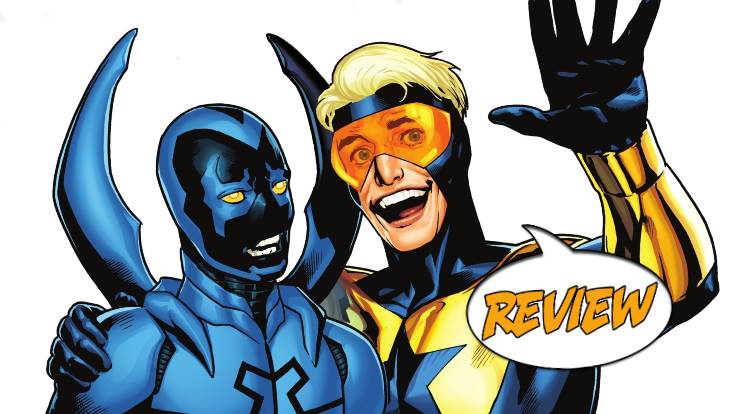 There’s a new/old Blue Beetle in town! What will that mean for our old/new Blue Beetle? Your Major Spoilers review of Blue and Gold #7 from DC Comics awaits!

Previously in Blue and Gold: Blue & Gold Restoration is up and running, with Booster Gold and Blue Beetle taking on any number of strange cases, from paranormal extremes to lost civilizations, ancient aliens, gateways to other dimensions, and even super-villains looking for help in going straight! But what happens when one of the threats turns out to be an old friend?

Blue and Gold #7 begins with the first official commercial for Blue and Gold Restorations, cutting to Jaime Reyes being possibly brainwashed by the mysterious manipulator who has been hiding in the wings. The unseen agent sends in a monster called Nullifex to attack the Blue and Gold team, overwhelming them with sheer power. When all seems lost,  Jaime arrives to turn the tide, leading to a decisive battle that ends when Buggles, Ted’s floating android assistant, comes up with a plan. With Nullifex defeated, Booster and Ted offer Jaime a place in their agency, but he turns it down, worried that he’ll be stuck in the shadow of the previous Beetle. As the issue ends, the mastermind’s identity is revealed to be…

…exactly who I thought it was.

There are two distinct art teams in this issue, replacing for the solicited Ryan Sook, and while neither is bad, they’re extremely poorly matched. Hester and Gapster have the high-contrast style that I expect from Phil’s work on Green Arrow, while Pelletier and Rapmund have a slick, rounded aspect to their visuals, making the transition points very jarring. It also feels like the art might have been a bit rushed (which would make sense, given the book being resolicited), especially in the last few pages. The story is pleasant enough, with questions arising about Buggles, the promise of a long-awaited reveal, and more of the social media commentary driving the narrative, but nothing really stands out as remarkable. Next issue’s wrap-up still has some heavy lifting to do, especially if (as I suspect) they’re going to tank Blue and Gold Restorations before things end.

The cover of this issue seems to promise a story that we never get from an artist whose work doesn’t appear in the issue, but all in all, Blue and Gold #7 is pretty okay, with some fun interactions between the main characters, even if the villain is dull as dishwater, with good art throughout the action sequence, earning 3 out of 5 stars overall. If either art team had done the whole book on their own, I might have rated it somewhat higher, but either way, it’s a better-than-average affair.

I saw the twist coming and the two art teams are hard to reconcile, making for a middle-of-the-road read.