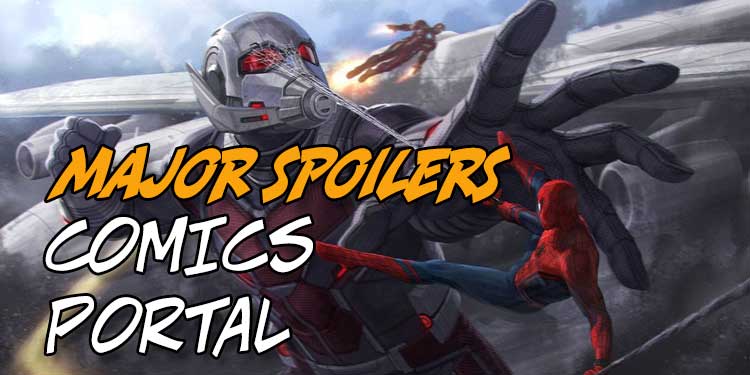 Two of Marvel’s insect-based characters are celebrating their 60th year as heroes—Spider-Man and Ant-Man! This year, 2022, is the 60th anniversary of these two insect heroes at the House of Ideas, and they’re getting very different celebrations!

As first reported here at MajorSpoilers.com, Ant-Man is getting a new four-issue mini-series looking back and looking forward with one of Marvel’s smallest heroes. It’s going to focus on a different incarnation in each issue–Hank Pym, Eric O’Grady, Scott Lang, and an all-new hero. No sign of Giant-Man or Yellowjacket being mentioned, however!

The first issue will look back at the early days of Hank Pym’s career. Here’s the description:

“It’s date night for Hank and his girlfriend Janet Van Dyne, but nobody told that to Ant-Man’s enemies! Watch as Hank’s ant-agonists band together to finally take down the scientific adventurer! But will anyone come to his rescue?”

Given Marvel’s recent track record, I expect the newest Ant-Man to be a more “diverse” version of the character. We’ll see! Ant-Man #1 (of 4) is scheduled to arrive in local shops on June 8, 2022.

Spider-Man is getting a larger birthday party since, well, he’s the “bigger” of the two heroes. There will be variant covers on several Marvel comics in April, a brand new Amazing Spider-Man #1, and a new Spider-Verse Unlimited #1 coming in Infinity Comics format on Marvel Unlimited, the digital comics platform for the House of Ideas.

I’m curious… exactly just how many Amazing Spider-Man #1’s have there been? I bet some of the collectors among us can answer that question! “Every Spider has a story, and this is where they’ll be told! The new Infinity Comic series starts with a 6-part story arc rolling out every other Tuesday, exclusively on the app.”

In the first issue, fans can relive the story of what actually makes Spider-Man SPIDER-MAN. The mini-series focuses on Miles Morales, oddly enough, and he has to take on the smartest, most savvy, and dangerous villain group ever. Readers can expect guest stars including Peter Parker and Gwen Stacy!

There are already several Infinity Comics, and they are described as comics stories told in a “visionary vertical format.” They’re laid out specifically for phones and tablets.

Marvel already has comics in this format starring the X-Men, Captain America, Shang-Chi, the Black Widow, Venom, Carnage, and Deadpool. It’s described as “a dramatic departure from anything we’ve done before, and a continuation of our history of innovation!”

Download the app for iOS or Android devices today to gain this award-winning experience for yourself. Both these heroes have powers that harken back to the insects their identities are focused on. At one point, Spider-Man developed more arms to resemble the insect he’s patterned after. Also, there have been many tales in which both heroes became more insect than “man,” as it were.

The two are also scientists in their “day” jobs. Both also have had long-lasting girlfriends, and they have also taken on superheroic identities as well.

There are also multiple versions of their identities running around. There are a number of “Ant-Men,” although I’m not quite sure just how many of them are in costume currently.

When it comes to Spidey, both Peter Parker and Ben Reilly are being called “Spider-Man,” not to mention Miles Morales. You need a scorecard to keep track of them all! The biggest difference between the two heroes has to be that the men in the Ant-Man outfits have been wayyy more varied than the Spideys have been. Even Doc Ock, when he was Spidey, had inherited a lot of the more positive characteristics that Peter Parker has had.

The Ant-Men, on the other hand, have been all over the map, including being “astonishing,” “irredeemable,” a spouse abuser, criminal to hero, and everything in-between.

Really, the only thing that has made them similar has been their powers and identity.

We’ll see how that changes when the “new” Ant-Man arrives on the scene!

I do have to say that I have always been a big fan of Hank Pym. I still don’t buy how he later supposedly treated Janet Van Dyne. That just seemed so very out of character to me! Now he has spent years trying to live in down as Giant-Man and in other ways!

We’ll see how Al Ewing handles all that!

It’s going to be a big 60th year for these Marvel characters, and we can expect more anniversary celebrations to happen in the years ahead! Frankly, I think that’s a good thing for comics!

What do you think? Any other Ant-Man fans out there? What else could the House of Ideas do to honor Spidey this year? What other variations of Ant-Man would you like to see?  Whatever your opinions, be sure to share your thoughts below!