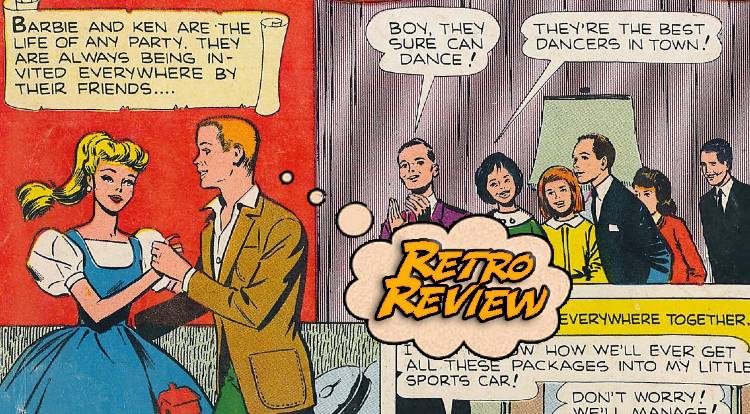 Comic book publishers have always scooped up what’s new and hot to put in their four-color pages. But sometimes, it’s remarkable just HOW quickly something becomes noteworthy. Your Major Spoilers Retro Review of Barbie and Ken #1 awaits!

Previously in Barbie and Ken: After watching her daughter playing with her paper dolls, Ruth Handler realized that there might be a market for a doll that wasn’t a baby, but an adult. Her husband, one of the co-founders of Mattel Toys wasn’t so sure, but Ruth was certain. Using a European toy as a model (which later became a point of litigation), she was able to get Mattel to release the doll, as well as an extensive line of fashions, sold separately. The doll was released in the summer of 1959, the company was sued by the European designers in 1961, but by that time Barbie was already a success. (The suit would be settled a couple of years later, with Mattel buying the copyright and patent rights outright by 1965.)

What you might not have realized, though, was that there were already Barbie fan clubs across the country by 1962, one of which is the source of this issue’s story, as each girl explains what her particular doll has been up to. Young Lucy is flying (unaccompanied!) to her grandmother’s house, but fortunately finds a friend in Air Hostess Barbie, who lets her sit in a jump seat near the kitchen and keeps her company. Barbie even introduces her to her special friend, Ken, currently the plane’s pilot. This issue’s artist, Norman Nodel, is almost certainly best-known for his work on Gilberton Publishing’s Classics Illustrated comics, with only a few Dell credits to his name, but his work in this issue comes across as Silver Age generic work. There’s nothing wrong with it, and in fact, Nodel has captured the face of the original Barbie almost perfectly, but it’s very much a workmanlike job. There are some fun airplane illustrations to be had, but then the position of storyteller switches to Tina, who imagines Barbie as a ballerina. The sequences here are very cramped, never showing anything that makes me think that there’s actually a stage to be shown. (Then again, since it’s a little girl’s imagination, perhaps it’s a lack of creativity on HER part, and not on Nodel’s?) Either way, Janey is up next, explaining how she met Barbie and Ken while visiting her aunt in the maternity ward. It’s actually an educational sequence, explaining for the grade-school target audience certain medical terms and situations, including letting Janey watch a surgery(!!) before setting off for home. As for our last storyteller, Patty causes a bit of a row when she explains that she met Barbie at Ken and Barbie’s wedding. The girls are up in arms about it, insisting that they would have heard about it, as they’re Barbie’s biggest fans! The story has an amusing tag at the end, wherein Patty tells them that she met a boy at the wedding, only to have a real boy show up to take her on a date, making the girls wonder if Barbie and Ken really DID get married in 1961. As with so many licensed Dell Comics, from The Brady Bunch to the Looney Tunes to The Mod Squad, Ken and Barbie #1 is mostly interested for what it represents, the almost-instant success of the fashion doll thanks to the power of television commercials, with pedestrian art and a simple story putting together a right-down-the-middle 2.5 out of 5 stars overall. As a child of the ’70s, it’s easy for me to think of the merchandising of Ken, Barbie, and every aspect of their life as a modern construct (Marvel had their own Barbie sub-line of comics in the 1980s, after all), but this five-issue series from the Kennedy administration is a good reminder that Mattel’s multimedia blitz is even older than I am.

Dell's output was meant to be disposable and everywhere, for kids of all stripes, including the young girls who loved their fashion dolls. On that level, it's successful enough, in a weird, historical way.