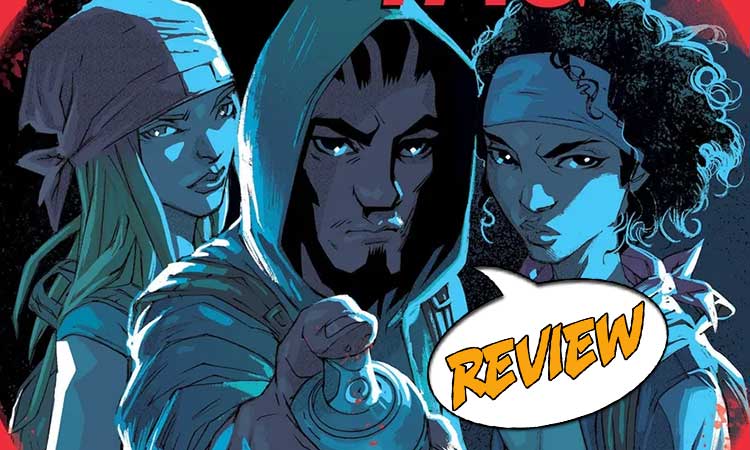 A trio of good-hearted graffiti artists, in the course of doing a good deed, have found themselves neck-deep in something bigger than they could’ve imagined, your major spoilers review of Red Tag #1 awaits!

Previously in Red Tag: While searching for justice on the streets of São Paulo, Lis, Lu, and Leco – three friends bonded by their love for Brazil’s unique street art “pixo” – discover a deadly conspiracy.

Red Tag #1 opens up in the ’80s on the eve of a massive political shift.  Two men are riding in the back of a limo, not concerned about much of it.  Things then shift to 2018 and things are focused on a corrupt police detective going about his day.  A pair of motorcycle riders then show up and spray paint his eyes and steal his cellphone before driving away.  Things then flashback to the night before where a trio of friends are hanging out discussing the next place they’re going to tag when one of them tells the story of how a harmless old man had his phone destroyed by the police detective.  The three then go out and graffiti a building.  Afterward, they formulate a plan to get back at the detective.  Things then go to the day after they stole the phone, with one of the friends hacking into it. She then looks at the contents and is shocked.  Things then shift to an office building and the same men from the beginning are there, discussing how to get the phone back.

CHEESY IN THE WRONG WAYS

Red Tag #1 has a lot of things going on for it on the surface: A setting that isn’t overused, a set of characters pre-loaded with a narrative excuse for artistic expression, and a crowd-pleasing “take it to the man” type storyline.  Unfortunately, the usage of these elements leaves a lot to be desired.  First off, the setting of Brazil doesn’t really have much effect on the story.  Other than a few off-hand mentions, this story could’ve taken place in any urban area.  As for the characters, they’re likable enough, the problem though comes from their dialog.  Specifically while discussing the detective and the old man, they fall into overwrought and overly dramatic declarations about justice and it all comes off as very hokey.  The plot for the most part is fine, there’s nothing that makes it stand out, but it isn’t bad by any means.

The art in Red Tag #1 is the best part of this issue.  The colors are bright, bold, and do a lot to give this comic a unique look.  The thing that was missing from this was the graffiti.  This issue’s solicitation makes special mention of a unique type of street art found in Brazil, but we only get to see one really clear example of this in the issue.

Red Tag #1 is an issue that introduces a few interesting blocks that are then put together in a somewhat dull and shaky tower.  There are definitely paths laid out here that can lead to some really interesting things, but as for this issue, there’s just not much going on to enjoy.  2.5 out of 5 stars.

Red Tag #1 is a comic that is a joy to look at, and a chore to read. Hokey dialog and missed opportunities riddle this issue.