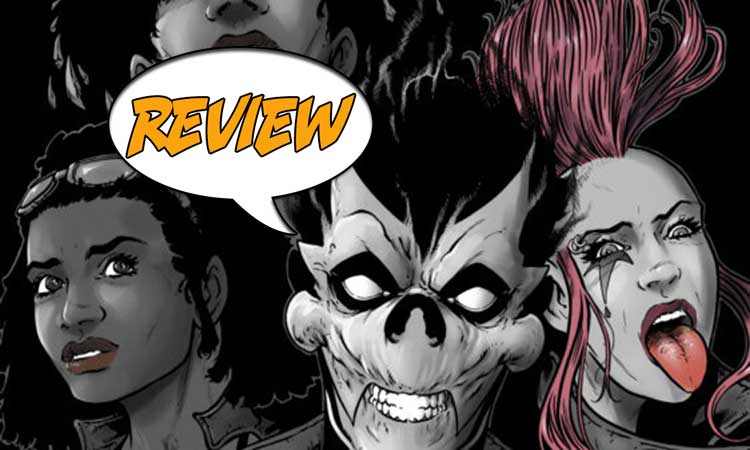 As Deadside and the Blights move out upon the Earth, Shadowman has questions. In the upcoming battle, does the world need a warrior, or a priest? Find out in Shadowman #7 from Valiant Entertainment.

Previously in Shadowman: Blights continue to invade the world. In Missouri, a Blight lures people to an abandoned hospital, kills them, and offers their bodies to Deadside demons. In New Orleans, the New Abettors go to a cemetery to talk to Punk Mambo and try to enlist her help with the Blights. Shadowman continues to talk with the demons as he is sure that if they get their way, they won’t find a paradise on Earth. Instead, their presence will turn it into another Hell. Master Darque and Sandria strike him down and mock him. Deadside also manifests and mocks him. Earth is full of hate and fear, and those have allowed her to appear. And now the Voodoo pantheon is on her side.

Shadowman #7 is interesting and poetic. As the Blights spread around Earth and the fight against them continues on multiple fronts, Deadside manifests and Shadowman muses on his own existence and purpose. He is the only narrator throughout the issue. There is no dialogue. Although there is plenty of action and Deadside certainly has her plans, everything we experience is framed by Shadowman’s thoughts at this crucial moment.

The end of the world has happened so suddenly. The veil between life and death had perhaps been weakening and was taken for granted. The consequences of fear and hate were allowed to fuel the destruction and now the Blights run rampant. It is impossible to read this and not overlay it with your own personal experiences.

Something I really liked was using the metaphor of a tidal wave rushing against and finally breaking through a levy. Considering that New Orleans is a focus of the fight, the parallel with Hurricane Katrina is undeniable.

As Deadside gains form and becomes something more tangible, more human, Shadowman recognizes that she also gains other human traits. She can be reckless. She can make mistakes. In desperation, people cling to even the slimmest hope, and that capacity for hope can be a strength even while being human, when compared to the near-divine, can be a weakness. This desperate hope spreads to the Abettors, to Punk Mambo.

Shadowman has some complex emotions to work through. He had hoped it would not come to this, that he could reason with Deadside. Instead, the Voodoo pantheon abandoned him and even his own Shadow Loa berates him. The world needs Shadowman. Has he sunk too deep into his own thoughts and left aside his responsibility? Is he a priest or a warrior? Or is he something else entirely?

As Jack muses, the art of Shadowman #7 takes on the task of showing us the action. It’s a visual nightmare, and a feast for the eyes simultaneously. I like how Deadside looks, but it is also interesting to see her caught up by magic thrown against her. Magical circles and sigils appear as blue light that has a sinuous almost-tangibility. She missteps and the magic writhes around her, grasping at her and attempting to hold her. This slows her down enough that Punk Mambo can get in a good hit before Darque and Sandria arrive on the scene.

That is one location, but it is not where Shadowman is. His scenes are decidedly darker and more brooding. Greens and purples make up the palette, so the scenery is as murky as his thoughts seem at times. He comes face to face with his Loa again, and it is not happy. It is like a metaphor about looking at yourself and forcing yourself to look at your darker side, your negative qualities, the things you don’t necessarily like. But this is not a book about self-punishment or self-hatred. It is about facing your negative side, accepting it for what it is, and making the attempt to build from it and to become better as a whole person.

BOTTOM LINE: THE MOMENT BEFORE ALL HELL BREAKS LOOSE

Shadowman #7 is a moment of quiet self-reckoning in the midst of the storm of war. Everything is setting up for the impending conclusion, and the moment of clarity we get is like taking a deep breath before the final battle.

The veil has been torn asunder and Deadside walks the Earth!