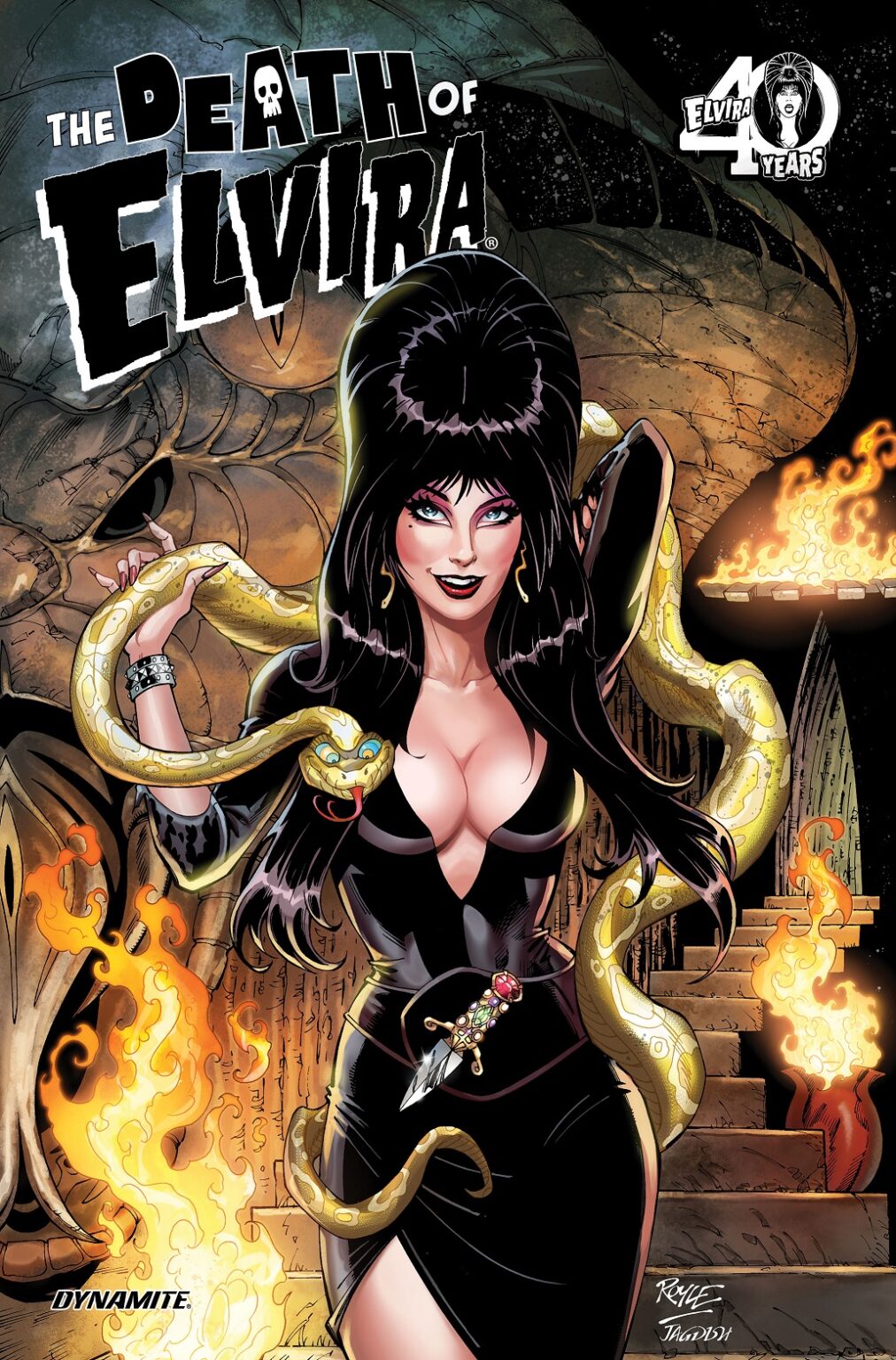 Elvira and Dynamite Entertainment invite fans to experience her latest blockbuster comics adventure in a super-sized issue available now on Indiegogo – the diabolical Death of Elvira! This special release commemorating her 40th anniversary will only be available for a limited time.
They say every great comic book hero dies once or twice. Usually… they get better. 30 years, ago Superman met his end by the hands of Doomsday. Dynamite’s own Vampirella was felled by her nemesis Nyx. Now it’s the Mistress of the Dark’s turn – could this be the Death of Elvira? Or is this just a desperate attempt to get fans to buy this thrilling special issue? Only one way to find out!

“I’ve done a lot of wild things as the Mistress of the Dark,” said Elvira. “Everything from film to television, music to comics – even wearing wired headphones and yoga pants! But there was one huge item left on my bucket list – DYING! Don’t panic horror hounds, there’s more to this spine-tingling tale than meets the eye!”

Elvira’s wake is a star-studded mad monster party, as every boy and ghoul show up to swap their favorite memories of the dearly departed. They’re joined by film directors, actors, and maybe a stalker or two. Maybe even… the killer! Each mourner tells their part of the life and times of the Mistress of the Dark, in flashback form, but which one is her assassin? Even from the grave, Elvira is determined to solve the biggest mystery she’s ever faced: her own murder! Read along, and see if you can figure it out in time!

“We were looking for a way to really honor the 40th Anniversary of Elvira, and I thought the best way to do that would be a recap of her incredible life and career,” said writer David Avallone. “But I needed a dramatic reason to do it… and decided to go with the most dramatic reason possible: her death!”

In addition to the big comic book celebration, fans can get packs of the exclusive new 40th anniversary Elvira trading cards. Two versions include an old school and modern set of cards, the former printed on nostalgic clay paper and the latter with fun modern wrapper designs. Combo packs and rare metal cards are also available.

The Death of Elvira comic book and the 40th Anniversary Trading Cards mark this major milestone, as Cassandra Peterson debuted her alter ego back in 1981 on the premiere of Elvira’s Movie Macabre. This beloved television show ran for five seasons, as Elvira hosted cult classic B movies with her trademark charm and wit. The breakout success of the show has led to four fright-filled decades of Elvira-mania, with countless collectibles, albums, cameo appearances, and her own fan-favorite feature film. Plus an extensive history of celebrated comic books, including her most recent runs with Dynamite and the ongoing reprints of her original stories.