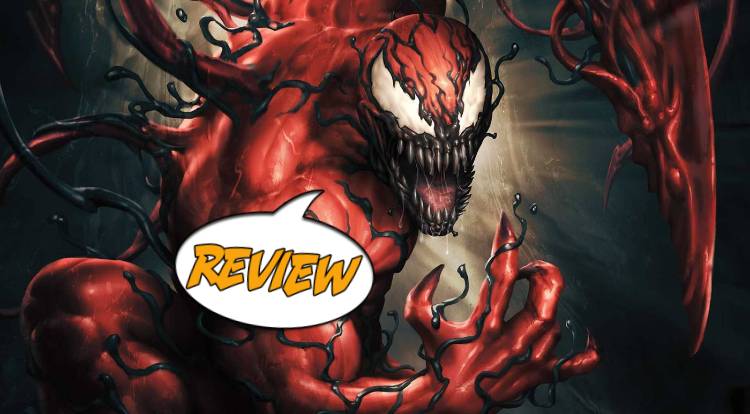 Venom’s least-favorite “son” is out and about once again, and where he goes, there’s bound to be bloodshed. Your Major Spoilers review of Carnage #1 from Marvel Comics awaits!

Previously in Carnage: Some years ago, the symbiote called Venom spawned an offspring, and that murderous bag of blood bonded to a serial killer named Cletus Kasady. Though Kasady’s body has long since been destroyed, his mind endured in the symbiote hive-mind finally escaping in the body of the Extrembiote, a creature made of both symbiotic biology and Tony Stark’s technology.

And now it gets murdery.

This issue begins with a very peculiar murder scene, as Detective Jon Shayde is called to the scene of a gruesome dismemberment in a fur coat factory. The victim has been suspended upside-down, perfectly centered, and lit, making it clear that this is the work of the serial killer known as The Artist. Before they can finish documenting the scene, Shayde notices the corpse’s belly moving, barely getting everyone out of the way before it bursts and releases a cadre of butterflies. Elsewhere in the city, The Artist is preparing to butcher his next victim when a strange figure comes through the window. “Did your mother never tell you stories about calling terrible things by their name?” asks the symbiote before realizing that he hasn’t been lured into a trap… He’s been summoned by his biggest fan. Some time later, we find The Artist’s would-be victim being interviewed by Detective Shayde, trying to explain what he saw, and how Carnage responded to The Artist’s request to be his next muse. There’s also a backup story by Michelinie and Ron Lim that takes place “some years ago” that captures some of the old ’90s Carnage flair but lacks the graphic killings.

There’s also a sequence in these pages where Carnage captures and seemingly kills minor-league Spider-Man foe The Hydro-Man, tearing him to pieces in a slightly less gruesome fashion, but only because he’s made out of water. Carnage’s debut thirty years ago was a breaking point for me and the Spider-Man titles, taking the most unpleasant aspects of Venom and bonding it all to a literal murderer, and this book seems to be predicated on doubling down on that grotesquery. The introduction of Shayde shows some promise, but quickly turns into a cliched take that we’ve seen many times before, in Seven, in Spiral, in half a dozen other recent films. The torture-porn aspect of the story takes the time to weld the tropes of superhero stories to those serial killer flicks, and it never really comes together as more than an homage. Manna’s art reminds me a bit of Rob Guillory’s work on Chew, but the cartoony faces and unusual proportions somehow emphasize the butchery and the blood, while Sabino’s coloring seems to be intentionally muted throughout the book. Is it to make the blood less overt? I’m not sure, but the emphasis on blues and purples with the buckets of blood that make up the crime scenes and our main character somehow makes it more distressing.

As someone who is not a fan of the idea of a Superhuman Serial Killer, I am clearly not the target audience for Carnage #1, but the combination of strange coloring, oddly cartoony art, and gross murder-worshipping story seems like even a fan of Eli Roth or Rob Zombie might be put off, leaving this issue with a depressing 1 out of 5 stars overall. If you want some blood and guts in your superhero books, this one might be up your alley, but there are much higher quality stories that cover this kind of story in a less-familiar way. Honestly, had the whole issue been more like the Michelinie/Lim backup story, I think it’d be more successful.

The almost-clinical fascination with serial murders in this issue is off-putting and horrifying, and the fact that it's a gleeful selling point makes it worse. I don't think I'll be coming back for any more of this take on Carnage.