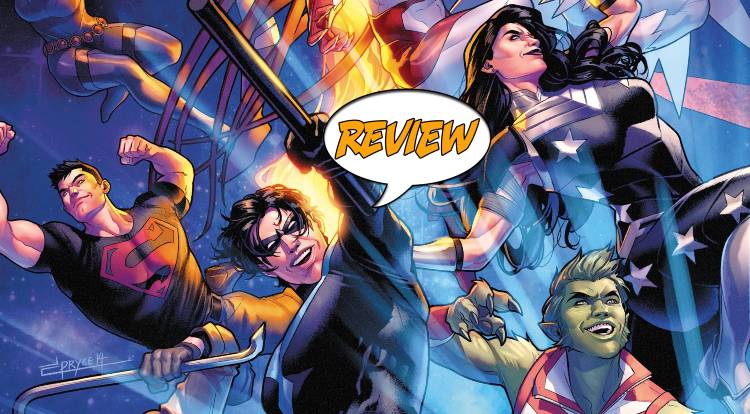 The final battle against Blackfire! An alien invasion! Wait, aren’t those the same thing? Your Major Spoilers review of Titans United #7 from DC Comics awaits!

Previously in Titans United: The Titans face their final challenge as the true enemy is revealed. An alien armada is heading toward Earth, and Superboy must decide once and for all where his true allegiance lies. Will Starfire join forces with her evil sister? And what mysteries lurk far below the streets of Metropolis?

JUST IN TIME FOR SEASON 3

Having spent the last couple of issues transformed into Blackfire’s personal guardsman, Black Zero, Superboy is once again in control of his mind and prepared to cause grievous bodily harm. He can’t quite bring himself to kill her, though, allowing Starfire’s evil sister the chance to explain what’s about to happen: An invasion by the aliens of The Citadel. The Titans have seen their powers leeched off to empower a new wave of metahumans who serve as Citadel shock troops, but Blackfire has an idea that will allow them to simply kill all the new metas, including (for some reason) Kite-Man, but Superboy and Nightwing won’t allow her to just kill indiscriminately. That’s when little sister Starfire has an idea of her own.

JUST SORT OF… THERE

This book features the team seen in the HBO Max Titans series, including Hawk, Dove, Beast Boy, Red Hood, and Wonder Girl, but drawn in costumes resembling the pre-Flashpoint comic book incarnations. It’s a weird decision, too, as there’s little-to-no resemblance between TV and comic Starfires, and most of the rest of the Titans are likewise different from their live-action selves. Worse still, this issue’s art is bland and indistinct, even moments that should be amazing (like the last page splash of Red Hood and Superboy.) Most of the new superhumans aren’t named in this issue, including Kite Man, who does get called “Chuck” at least once. If it weren’t for his costume, I wouldn’t have even realized he was meant to be someone recognizable. The dialogue is mostly perfunctory, ranging from just okay at best to just plain awful at least, with many of the lines from Red Hood underlining the awful parts. The climax is a little bit better than that but suffers from a lack of stakes and a lack of a central focus, with Starfire and Blackfire coming together to blow up one ship, after which the armada retreats.

If it weren’t for the modern trade dress, Titans United #7 could be mistaken for an issue of several incarnations of The Titans, from the New 52 Titans to the post-Crisis New Titans to the recent volume of Teen Titans with Roundhouse and Crush, with both art and story doing what feels like the minimum to keep the story rolling, earning 2.5 out of 5 stars overall. It’s not really a good tie-in to the TV Titans (whose 3rd season had a couple of big ol’ twists in it that aren’t shown in these pages) or for the comic books that have come before.