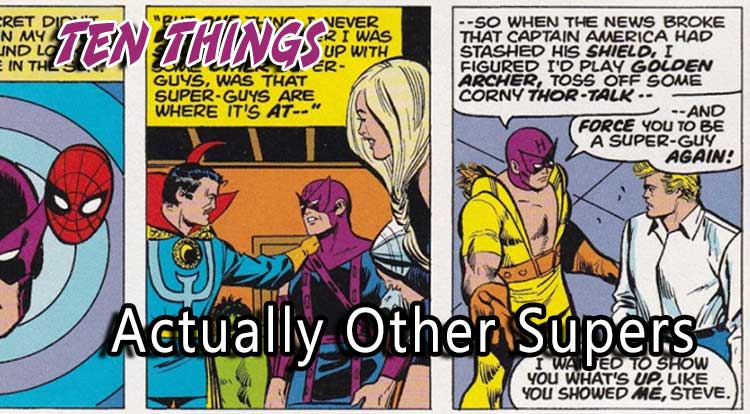 Ten Supers Who Are Actually OTHER Supers

A secret identity can be a very tricky thing, and some masks end up being hidden by ANOTHER mask. Welcome to Ten Things: Ten Supers Who Are Actually OTHER Supers!

Whooshman-Bicarbonate Films, in conjunction with An Amateur Comics Historian and The Dark Knights of the Multiverse, Presents:

TEN THINGS: TEN SUPERS WHO ARE ACTUALLY OTHER SUPERS!

While on a class trip in Europe, Peter Parker realized that having Spider-Man appear everywhere he does is a problem. Thanks to a special stealth suit provided by SHIELD director Nick Fury, Master Parker was able to keep his webbed alter-ego under wraps, but ends up raising suspicions anyway. Quick-thinking Peter insists that the hero is in fact a European local known as The Night Monkey, stepping on Spider-Man’s signature acrobatic style. It’s a nice joke moment that leads to a series of amusing recurring gags throughout the movie, leading Marvel Studios to create this faux trailer for a Night Monkey solo film. When Dick Grayson is accused of a murder he did not commit, he wants to take to the streets in his masked identity to clear his name. Batman, however, refuses to let him use his NIghtwing identity for fear of someone unraveling their secret identities. Enter: The Target! Dick’s adventure in his new suit is a one-shot deal, retiring once his suspension from the police force is up, but it’s an interesting look nonetheless.

I find it really interesting how much armor he has in this identity (and how much he lacks in his Nightwing suit.) Unbeknownst to her, Karolina Dean is actually an alien from planet Majesdane, whose parents were exiled from their world for criminal activities. A member of The Runaways, sometimes known as “Lucy In The Sky” for her psychedelic light effects, Karolina tried going to college, only to drop out and become a rare L.A. superhero, dubbed “Sparkles” by the media. This brought her to the attention of one Doc Justice, who gave her an entirely different superhero identity (and who also held some not entirely savory secrets of his own.) The original Wingman was a European hero who betrayed the Batman of All Nations, leading to his own demise. Not long after, black sheep of the Bat-Family, Jason Todd took over the role of Wingman, while Damian Wayne became his faithful sidekick Redbird. The entire exercise was designed to protect Damian after his own mother, Talia, put a price on his head. The Jason/Damian team was a successful one, even though Robin didn’t realize who his partner was, which led to resentment after he discovered the truth. Of course, Batman followed up by suspending his Robin privileges, making for even more problems among the Sons of the Bat. Once known as Screaming MImi, Melissa Gold initially signed on to Baron Zemo’s Thunderbolts team to make a few bucks and maybe conquer the world. Melissa quickly discovered that the heroic lifestyle suited her, leading her to betray Zemo and take on her new heroic identity permanently. Of all the T-Bolts members, her face-turn has been the most successful, with Songbird serving a long tenure with The New Avengers and becoming a full-fledged Agent of SHIELD. The main villain of Kamen Rider Zi-O, SOUGO Tokiwa isn’t merely the leader of Quartzer and a stone-cold villain: He IS Kamen Rider Zi-O! Or, at least, he’s a version of that same man, thanks to some patented #TimeTravelShenanigans. With the intention to rewind time to a previous era, he homages the first Kamen Rider of the Heisei Era, Kamen Rider Black RX, with his incredibly hard-to-spell name serving as an anagram of that hero’s nom de guerre. Known in the 21st Century as The Recluse, Errol Kendrick was cursed many decades ago during an African safari, forced to consume the hearts of humans to survive. During the heady days of Prohibition, he fought evil as the pulp-influenced Doc Spider, secretly consuming the criminals he mowed down without mercy. As a founding member of The Front Line, Recluse is one of the cornerstones of his universe’s superhero iconography, serving as the Batman-analogue character among the archetypical heroes of the team.

He still eats hearts, though. After Superboy and Supergirl were forced to leave the Legion of Super-Heroes due to Kryptonite pollution, the mysterious Miss Terious (Hey! I just got that!) and her partner Sir Prize appeared to join the team’s ranks. Each wearing lead-lined armor that no one could see through, they were clearly the Kryptonian cousins in disguise!

Except… they weren’t. Miss Terious was revealed to be Nura “Dream Girl” Nal, accompanied by Star Boy, returning to the Legion after an extended absence due to his being accused of murder. Kryptonite was just a red herring all along!

In an alternate reality wherein The Avengers never formed, thanks to Mephisto, Sam Alexander never discovered his late father’s Nova Corps helmet. Instead, he was empowered by Doctor Spectrum’s Power Prism after getting involved to save that hero’s life from the villain M.O.D.A.C. Spectrum allowed him to maintain his abilities, even taking him on as a sort of kid partner. Teaming up with heroes Girl Power (Kamala Khan) and The Falcon (Miles Morales), Kid Spectrum became a founding member of The Young Squadron, trying to show the public a less-martial, less-fascist take on superhumans. A mysterious hero who showed up in Metropolis (and also showed up Booster Gold more than once), Supernova was believed to be none other than Superman in disguise. After Booster’s death, he became the primary hero of Metropolis (Superman was absent for a year due to temporary power loss), battling evil with aplomb and one of the coolest suits of all time. Eventually, he was unmasked as… NOT SUPERMAN AT ALL, but in fact Booster Gold, who was able to fake his own death thanks to cleverness and another dose of #TimeTravelShenanigans.

Thanks to Faithful Spoilerite Bradley Polk for today’s topic, Ten Supers Who Are Actually Other Supers! If you have a great idea for a Ten Things collection, feel free to follow along @MightyKingCobra to suggest your own! There’s always more Ten Things madness on my Twitter or check out the full Twitter archive here! As with any set of like items, these aren’t meant to be hard and fast or absolutely complete, if only because nothing is more powerful than the ol’ bait-and-switch. Either way, the comments section is below for just such an emergency, but, as always: Please, no wagering!
[su_signoff