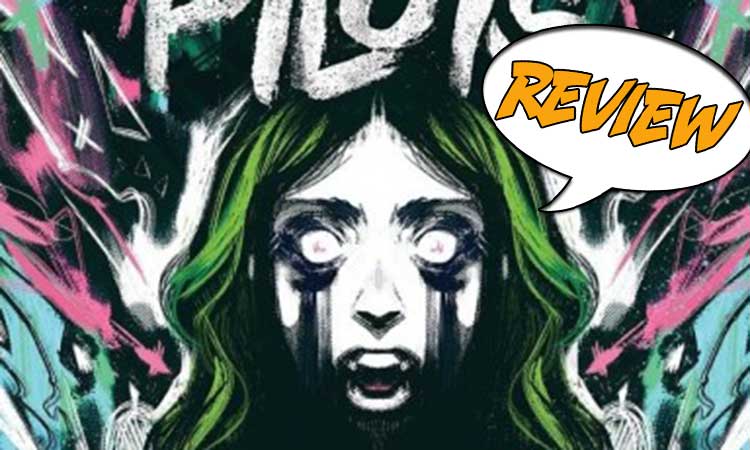 Rip finds the last ghost they are looking for. Rzor warns him that she is the most dangerous of all, but Rip wants to help Ami in her fight against Meg. Is this last ghost the answer or a new problem? Find out in Home Sick Pilots #13 from Image Comics!

Previously in Home Sick Pilots: While Ami distracts Meg in the equivalent of a kaiju punch-a-thon, Rip and Buzz search for the final ghost from the Old James House, who is associated with the stolen toilet. They arrive at an abandoned and very smelly town with a network of tunnels beneath it and become separated. Rip feels it looks very much like the nuclear testing site where he had been with Meg. Buzz is with the Old James House ghost, and through him, gets a flashback of 1941 when the military was experimenting here with the potential powers of ghosts. One of the ghosts they had captured was the Old James House, who managed to escape, but he left another behind. The original ghost project was given up and shut down, leaving only one lone guard.

DESPAIR AND THE LAST CHANCE

Home Sick Pilots #13 opens with a new narrator speaking, the missing ghost herself. She has been alone and abandoned, and apparently, the ghost of the dead guard is not particularly interesting company. She sees Rip wandering through the tunnels, feels a bond with him, and tries to speak to him. He cannot hear her.

General Rzor inhabits the ghost of his grandfather in a form based on his dog. The part of him that is the old General recognizes the guard; the part of him that is young Rzor realizes that the guard died here on duty. The ghost of the guard recognizes his General who finally relieves him of his duty, and the ghost drifts off as dust and nothingness. Rzor feels as though his job is complete.

But Rip reaches for the lever to release the last ghost. Rzor warns him that this ghost is the most dangerous one; she is the one who created the tunnel network, everything. But Rip sees himself in another role. Buzz is with Ami and he is on the outside. Perhaps the last thing he can do for her is let this ghost-free, even if there is any risk to him. Maybe Ami and Buzz will be able to set everything right.

The ghost keeps the tunnels shifting, and Rzor loses track of Rip. The Old James House ghost finds him and leads him deeper into the maze. The last ghost works hard to connect with Rip and finally reaches him. He releases her, and he is brought together in an armored version of her, just like Rzor with his grandfather and Buzz, at times, with the Old James House. She/they grab Rzor, who apologizes, saying they just wanted to be important. This is a fitting sentiment for both of them. Rip and the last ghost dispatch them.

Buzz arrives on the scene, immediately recognizing that Rip is wearing the last ghost. She demands to see the Old James House ghost. Buzz knows he abandoned her here when he escaped, and just insists on taking this last ghost back to give Ami a chance in her fight.

But this last ghost does not want to return to the Old James House at all!

As the story of Home Sick Pilots #13 becomes more surreal, the art strikes a balance between the otherworldly and giving us some anchors so we don’t become utterly confused. It is so helpful that they’ve set up the concept of ghosts creating artificial bodies that can be inhabited by humans, and that these bodies take on a symbol related to the death. Rzor’s ghost, for example, has a dog-like head, a reference to the small dog the original General always had with him. For the Old James House, it is the horseshoe. For the last ghost, though, her symbol manifests as chains. Her part in this relationship is more complicated.

I like how Rip comes into his own in this issue. As the last ghost comments on how he must feel abandoned, we see it in his face. He has undergone some trauma throughout the series, and it is hitting him hard. This may give the last ghost a way into his head. When he realizes he has found this ghost, we see his resolve as he decides to free her. We’ve seen in previous issues that he has been hit hard by depression and despair. That despair gives him strength, but it also makes him vulnerable.

BOTTOM LINE: A TRAGEDY OVER DECADES

Home Sick Pilots #13 adds an additional twist to a story that is already unorthodox. The sense of tragedy is greater than we ever expected, and it does so in a way that is grimly evocative.

Another ghost, another complication.