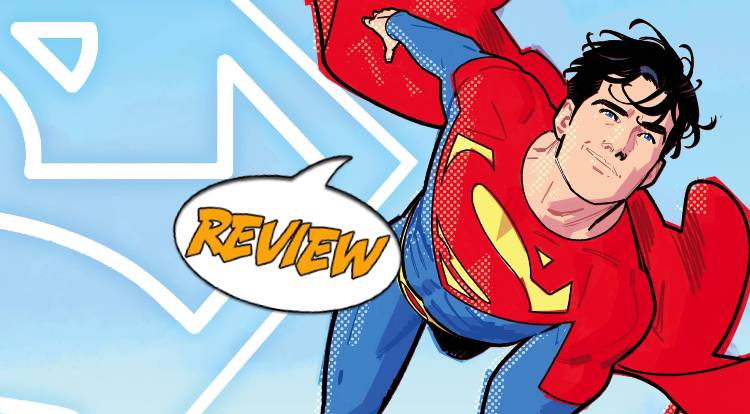 Once the Boy Wonder, Nightwing now has Superman for a sidekick! Or is that the other way around? Your Major Spoilers review of Superman: Son of Kal-El #9 from DC Comics awaits!

Previously in Superman: Son of Kal-El: Nightwing promised Clark Kent that while he’s off-planet, Nightwing would look after Clark’s son, Jon, as he tries to fill his father’s shoes as Superman. But with someone out there murdering superpowered people, is Nightwing in over his head?

A STORM OF LIES

After the murder of former Titan Risk in this month’s issue of Nightwing, all the active supers work in pairs to avoid becoming the next target. That means when Nightwing arrives to break up an illegal weapons deal, the thugs expect to face one hero, but end up with Superman in their face as well. Their entire enterprise ends up being a ruse to bring in the super-killers who executed Risk, none of whom are up to the challenge of facing Jon Kent. One is almost taken into custody after foolishly head-butting the Kryptonian, only to have his handlers kill him remotely. The others cut and run to LexCorp, while their handlers release the footage of the conflict claiming that Superman killed the villain, but Nightwing agrees to help Superman deal with his guilt and act as an official mentor while Superman is off-planet.

First and foremost, the sequence where Nightwing lets himself be thrown from the rooftop to allow Superman to get the drop on the bad guys is brilliant both visually and in its pacing, with the criminals trying to distract Superman with the specter of his partner dying, only to have Nightwing break out his glider-wings. Redondo’s art is wonderful, with an unbothered Nightwing waiting for the most dramatic moment to reveal his escape hatch. The interplay and dialogue are also really good, with Jon telling Grayson that Nightwing was his childhood hero, reminding us of the silly decision to age him up and making it drive the story. Best of all, Nightwing (who now owns The Truth website run by Jon’s boyfriend Jay) convinces Lois to come work for them and help clear Superman’s name, ending with a charming callback to the first half of the story from Grayson’s own book.

I was initially leery of this title because of the possible Future State connections, but Superman: Son of Kal-El #9 is a truly charming issue, well-plotted and dialogued with excellent art by Redondo and von Grawbadger really selling the connection of the World’s Finest sons and making their relationship as compelling as that of Damian and Jon or their famous fathers, earning 4.5 out of 5 stars overall. If this is going to lead to tighter continuity between the two books, I’m all for it, especially given Taylor’s expert use of Dick Grayson as an elder statesman and mentor. It feels like a role he was born for, and it strengthens Jon’s story and experiences as a young hero.

The Nightwing/Superman team reinvents the World's Finest team in a truly impressive and creative way, and young Jon with experienced Dick Grayson makes for a great balance.