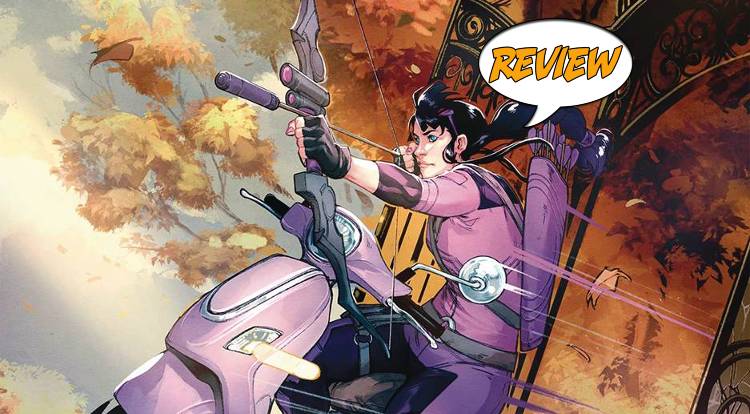 Kate Bishop and her estranged sister have to defeat a villain who has taken over their own home! Good thing Hawkeye’s got friends. Your Major Spoilers review of Hawkeye: Kate Bishop #5 from Marvel Comics awaits!

Previously in Hawkeye: Kate Bishop: It all comes down to this! Kate, Susan, and Lucky have to shut down Resort Chapiteau once and for all, and to do that, they have to follow the Circus of Crime into the very last place Kate ever wants to go: Home.

The Circus of Crime (or at least, The Ringmaster’s niece) has locked themselves in the Bishop family mansion, searching for a fragment of the Cosmic Cube. After last issue’s resort explosion, Hawkeye’s sister, Susan, has joined her in coming home, but Kate has also called in a couple of her friends from the Young Avengers: Cassie Lang and America Chavez, as well as Lucky, the erstwhile Pizza Dog. Their initial attack forces Kate to face her old rival Fifi the Archer, who quickly finds it hard to win a fight when she’s six inches tall, thanks to Cassie’s Pym Particles. America and Susan teleport in but are quickly overcome by Madame Tiboldt’s new reality-warping powers. Hawkeye is forced to work through the ghosts of her own past, while an unexpected hero gains possession of the Cosmic Cube. (I’ll give you one small hint: He has one eye, four legs and loves pizza.)

The story ends with Madame Pasquale escaping scot-free, which makes the whole battle feel a little bit pointless, even with Fifi in custody. The main dramatic thrust of the story is Kate coming to terms with Susan, allowing the story to end with them living in a mansion again, a move which feels intentionally designed to emulate the Disney+ Hawkeye show. That’s not a problem in itself, but this issue doesn’t give a whole lot of grounding for their conflict, the new Circus of Crime, or Fifi’s hatred of Kate Bishop, leaving the overall story long on trippy action and short on explanation. Balam, Poggi, and Junior’s art isn’t really to my liking, with indistinct faces for every character, and inconsistent backgrounds. The issue’s biggest problem for me, is giving all four of our main characters and both the villains the exact same lanky physique, right down to being the same height in some panels, with proportions that remind me of Peter Chung’s Aeon Flux. Given that America is usually depicted as half-a-head taller than Cassie and Kate, it’s noticeable.

BOTTOM LINE: NOT QUITE ON-TARGET

The action sequences in this issue are creative, but Hawkeye: Kate Bishop #5 suffers from indistinct art throughout the issue, muting my enjoyment of the parts of the story that do work and making it hard to follow (especially in Madame Tiboldt’s escape), working with a story that seems short on consequence, earning 3 out of 5 stars overall. There are lovely touches to be found in this comic, but I would have enjoyed a little more context in both visuals and story for the proverbial slam-dunk.

It feels like the main purpose of this series is to get Kate to a status quo like her TV counterpart, but there's some charismatic stuff going on in here. Also: Pizza Dog gets pizza.