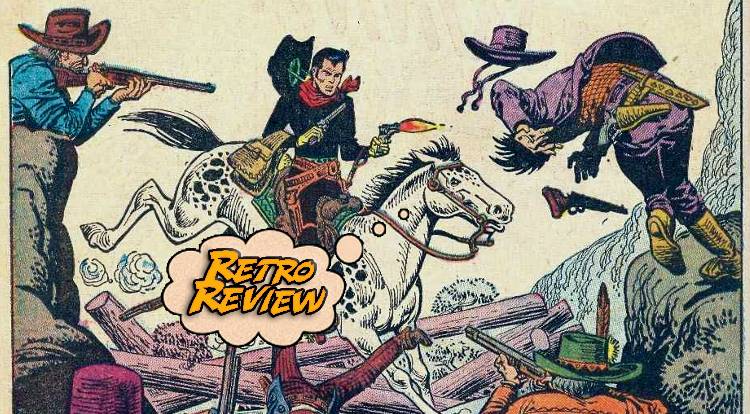 Previously in The Ringo Kid Western: Having gone to art school under the post-WWII G.I. Bill, Joe Maneely joined the ranks of Atlas Comics in 1949. Initially a freelancer, he joined the office staff, where his speed as an artist made him a favorite collaborator of editor-in-chief Stan Lee. That speed was remarkable enough, but Maneely also managed to add a stunning amount of detail to his work, especially for an era where reproduction wasn’t as sensitive as it is today, meaning that many of the details would get lost during printing. Maneely was an Atlas Comics star at a time when superheroes were few and far between, allowing him to work on horror books, humor titles, and co-create The Black Knight, an Arthurian hero, in 1955. As far as I’m concerned, his biggest impact came in the pages of Atlas’ western comics, especially the adventures of The Ringo Kid.

It all started in a small farmhouse, where one Cory Rand, Esquire, lived with his beautiful wife, Dawn Star… Mr. Rand had lost his job as a barrister due to old-fashioned racism, as his colleagues were unhappy with his interracial marriage. The birth of their son, though, was a time of great happiness and the boy was raised with his feet in both cultures. Maneely’s detailed, almost-but-not-quite busy art is on clear display from the very first page, showing off details that no other artist would have bothered with (and that the colorist clearly can’t keep up with.) The lad, whose given name is never revealed, is nicknamed Ringo by the ranch hands and home-schooled by Cory and Dawn Star (no relation to the later Legion of Super-Heroes member) to protect him from those who would hate him for his dual heritage. By his teens, things reach a boiling point, and local teens attack Ringo. When the Kid tries to defend himself, one Shad Rathburn attacks the boy, leaving Cory to take an unusual tack against the would-be bullies. Upon reaching home, though, Papa Rand finds the house in flames and his wife dying. The murderers then try to string him up, but Ringo arrives and shoots the noose with pinpoint accuracy, moving down the men who would have made him an orphan. With both of them now marked men, Cory and his now-outlaw son realize that they have to part ways. An indeterminate amount of time later, The Ringo Kid has become a wanted man, known throughout the territory for his skills with a firearm and his tracking abilities, but he’s also been forced to stay away from his father and his mother’s tribe. When Congress allocates fifty thousand dollars for the Native American tribes, a group of unscrupulous men realize that they can not only steal the money for themselves (which is the equivalent of 1.8 million in 2022 dollars), they can spur a war with the Comanche and Cherokee tribes, allowing them to kill with impunity. The Pony Express rider, whose presence places this story in 1860 or so, is shot dead by agents of the cabal, but he is found by The Ringo Kid who realizes the importance of his payload and sets off to deliver it himself. Doc Stiles and his gang set up multiple ambushes along the route, only to find themselves at the mercy of Ringo’s deadly accuracy and superior horsemanship. Having successfully delivered the pouch and averted a bloody war between settlers and the Native people, Ringo makes no attempt to hide his identity, but is allowed to go free by a representative of the Army, having proven himself better than the rumors about his murderous outlaw ways. Maneely’s art is the star of The Ringo Kid Western #1, as it is with every issue of his work, adding tons of detail work and realism to the wild west tales and elevating this issue well beyond standard ’50s fare, earning 4 out of 5 stars overall. Sadly, Maneely’s story ends tragically, as he fell from a commuter train in 1958, ending a career that rightly should have been heralded as ground-breaking. I sometimes wonder about what the Marvel firmament would look like if Maneely had joined Kirby, Ditko, Heck, and the other Marvel mainstays when the superheroes came back around again. Would he have been the driving force of The X-Men or The Avengers? Would he have created something equally as enduring?

It’s truly regrettable that we’ll never know what might have been.

It's impossible for me to read Joe Maneely's work without wondering what the Marvel Universe might have looked like had he been around in 1961, and even if the stories are nothing special, the visuals make this series worth tracking down.