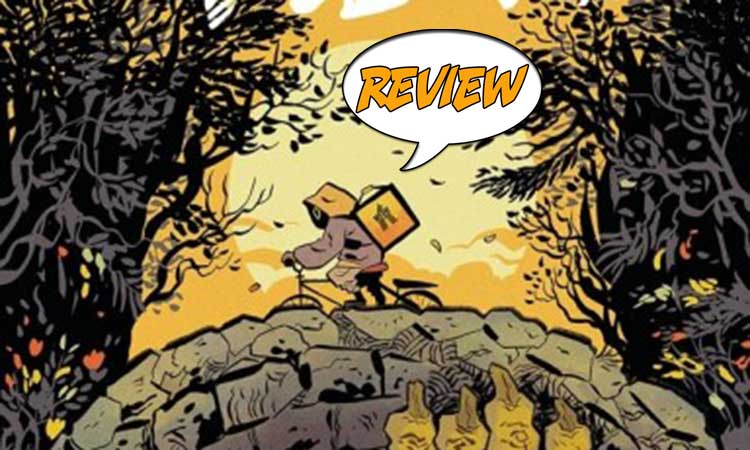 A changeling returns to the normal world of Monkey Meat Island. As a delivery boy, he has a once-in-a-lifetime opportunity to make a difference. How will that work out for him? Find out in Monkey Meat #3 from Image Comics!

Previously in Monkey Meat: We followed the story of Haricot, a young man who failed at university, couldn’t find a job, and was beat up for no reason. One magically possessed can of soda later, Haricot has superpowers, and promptly gets into a fight with security guards who came to help him and decides to take revenge on his tormentors. He thinks that now that he is a “hero,” people will automatically respect him, which they don’t. It’s just another day on Monkey Meat Island!

FOLKLORE IN THE BONES

Monkey Meat #3 opens with Lug sharing a beer with his friend Karl who tells him a story. This one is about a young magician who works as a delivery boy. But before then, he was a changeling. The Fae had taken him as a child and kept him for years as a slave, releasing him only when he was about to become an adult. Needing a job, he became a delivery boy, but he never felt like he fit in on Monkey Meat Island.

One day, he has a special package to deliver, and to make this delivery, he must cross a bridge guarded by a troll. I love this. The setup is folkloric, and the story turns out to be so too. The bridge crosses a river poisoned by waste, and the bridge is also cursed so no living thing can step on it. It is the impossible task our hero must face.

The delivery boy takes his time. He puts a protection spell over the package for starters. Then he tests the bridge. It repels him. Then he tests the troll and finds it resistant to a huge variety of spells. He has one last thing to try, and that is to simply dash across the bridge. The troll flattens him, although his package is safe. Well, he is flattened, but he manages to get back up again.

After all, no living thing can step on the bridge. As it turns out, he took a sip of Potion of Living-Death, a little invention of the Monkey Meat Company so they could keep their employees working after they died of exhaustion. (And there’s the jab at working conditions!) The Company no longer uses the Potion, but they still have some lying around.

But what is this delivery? Once a family came to the island seeking a better life. After they arrived, they felt that their little girl had changed and been replaced by a monster. They were picked up by the authorities, but no one believed them. But the delivery boy read about it and returned to the Fae to bargain with them. They were happy to exchange the infant for a Monkey Meat TV subscription.

There’s a little more to the story than just this and it is a delight to read.

You never know what to expect in the art of Monkey Meat #3, but it has a lot of imagination. I particularly like the troll. When the delivery boy first arrives at the bridge, we first see the troll by silhouette with glowing eyes and a smile, as though he is at some distance. Then we see him in all his trollish glory. The strong inking makes him look textured and hairy all over. He has a wild bunch of unruly hair and a beard, all black with the texture picked out by colored lines. As the story progresses, it is not unusual to see him in silhouette, and I enjoyed seeing all the different ways used to give him expression.

The troll has a little saying, again very folkloric, when he tells people they can never cross his bridge. This is established and then it is used as the connecting thread through the montage of magical spells the delivery boy tries. Day turns into night and back into day. The spell effects have different colors and textures. With one word per panel, in a wonderfully monstrous font, we can tell that nothing makes an impression on the troll. It is creative and succinct and pays off with the font punching the poor delivery boy away where we see him bouncing along in the dirt.

BOTTOM LINE: A DIFFERENT TONE AND A DELIGHTFUL STORY

Monkey Meat #3 is a modern twist on a classic story about a changeling. This one has an uplifting ending and still has time to get in a few jabs about the Monkey Meat Company. It’s a quirky little story that stands up well.

Life can be tough on Monkey Meat Island, but every now and then the stories end well.