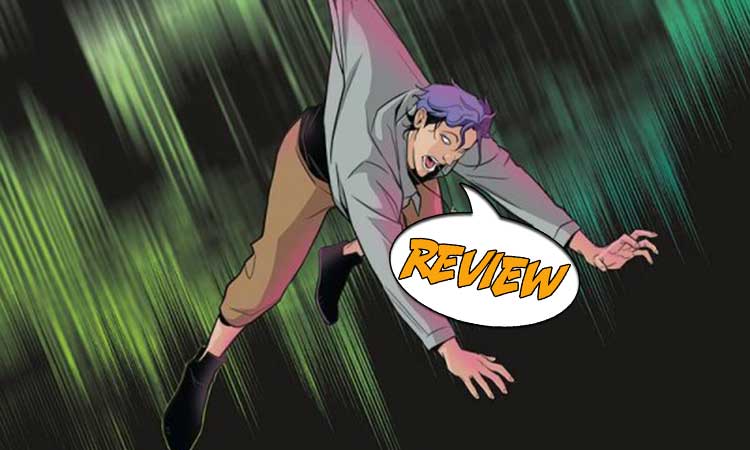 Sin meets Axton, who wants the Shard, and is willing to make a deal for it, and has some muscle to back him up. Just how much is the Shard worth to her? Find out in Lunar Room #3 from Vault Comics!

Previously in Lunar Room: Sin Breaker continues to adjust to life NOT as a werewolf. Zach Zero tells her that they are after the Lunar Room Shard, which is a shard from a magical sword. They believe that they can undo Sin’s curse if they can get to the Lunar Room on the right day at the right time. Angie makes the rounds of Gloria’s territory with a new recruit, and they shake down the local businesses for magical components. Angie reports back to Gloria but doesn’t mention any of what she has observed about Sin. The new guy brings her up instead, but if he was hoping to get Gloria’s attention, he gets it in the wrong way.

Lunar Room #3 opens with a territorial skirmish between Sin’s gang and another, which turns out to be a memory of when she first sees Angie and makes her connection with Gloria’s organization. Speaking of Gloria, currently, she does not seem to be concerned about Sin in the least, although she is concerned about the Lunar Shard that Zach Zero has. It can break her enchantments, and that spells trouble. Gloria orders Angie to bring Zero, the Shard, and Sin back to her.

Sin drags a body out to a car where she meets with Axton – Zero’s twin. He wants the Shard and is willing to pay for it. It isn’t technically hers to trade, but she assesses him and his expensive car. While she is away, Zero is back at her apartment, rapidly becoming bored. She ordered him to stay inside, and his paranoia helps keep him in place. So instead of going out, he pokes around everywhere. We might learn some minor details about Sin, but he is not impressed. Then he finds a mirror enchanted with a communication spell. This is basically the mystical version of voice mail and in short order, he breaks in. He finds a variety of messages from a “Tech-No,” a variety of mage who rejects any type of technology. Sin has asked her about the Shard, and she does not know much. But that gets Zero thinking about the Shard, and the magic of the mirror rebounds on him and kicks him out.

Axton appears to also be part of the secret organization protecting the Shard. He takes Sin to an abandoned warehouse where a few well-armed cronies are hanging out. They’re willing to do anything to get the Shard back. She counters by asking about Zero. He doesn’t seem to care. Sin has opinions about family and family-type relationships, and something seems off. Besides, he has not offered her anything significant in return. And maybe these are not the only people who are following her.

DOWN TO EARTH FANTASY

The art of Lunar Room #3 brings the world to life. I’m fascinated by the mix of magic and the supernatural with a gritty, street-level setting. The first scene with Gloria is a case in point. She is as cool as a mob boss, giving Angie her instructions as she hands a used dagger to one of her associates as a couple of bodies fill in the background. This isn’t just a case of cleaning away the bodies – one of them is dripping blood, and the other may have remnants of a soul. These are valuable commodities, so her associates carefully collect them.

To lighten things up a little, the scene with Zero is amusing. Imagine someone with ADHD poking around someone’s apartment. Sin has half-eaten restaurant leftovers in her fridge and hunks of meat in the freezer. He pokes around her medicine cabinet and is grossed out by her expired potion bottles. He doesn’t have a chance of lifting the kind of weights she does, but he tries anyway. Not only does this fit with his character from what we have seen of him so far, but it also feels natural when he finds a note to Angie and even when he finds the enchanted mirror.

Lunar Room #3 strikes a great balance between the underworld and the supernatural world. I love the focus on some particularly tough women, and I enjoy the fact that they have flaws. The build-up is a little slow, but I am intrigued to find out more about the Shard, and what exactly the Lunar Room may be.

Sin may no longer be a Werewolf, but she still has connections.