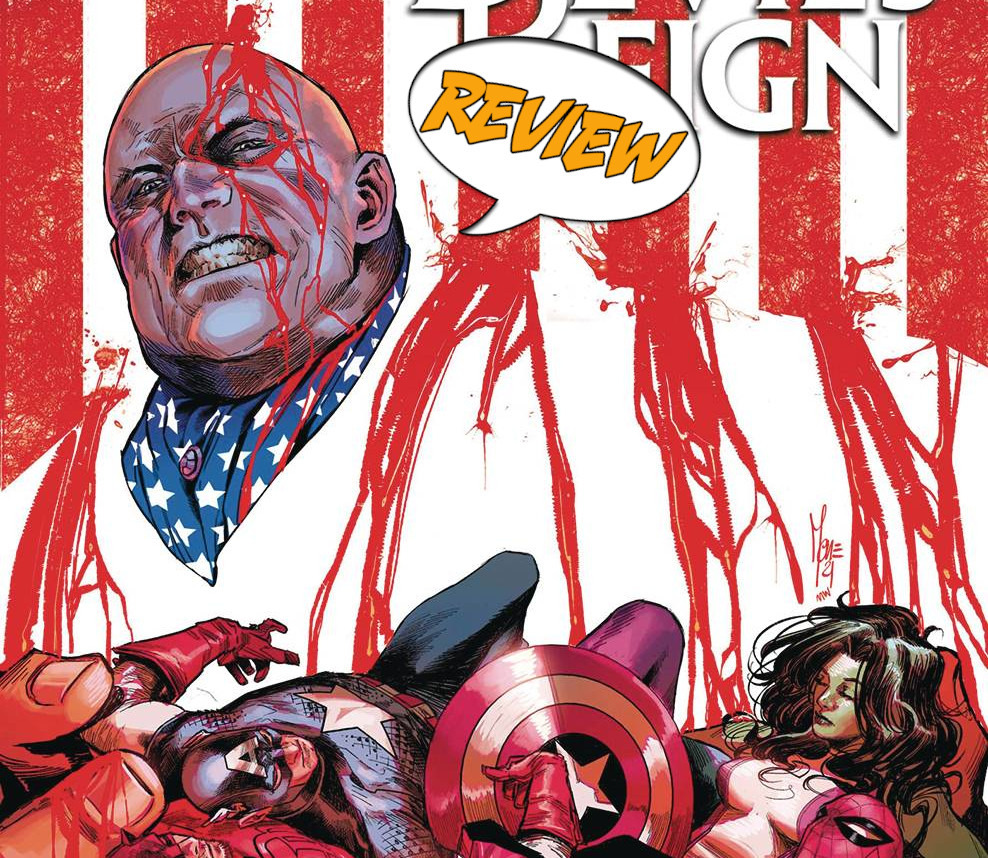 Wilson Fisk remembers the true identity of Daredevil, and he is angry. Find out how Mayor Fisk gets his revenge in Devil’s Reign #5 by Marvel Comics!

Previously in Devil’s Reign: Once, the world knew the identity of Daredevil. When the world forgot, Wilson Fisk realized that someone or something messed with his head. Recently as mayor of New York, Wilson Fisk outlawed vigilantism and recruited the Thunderbolts to become his personal police force. Additionally, he uses the power of the Purple Man to influence people and allied himself with Doc Ock to keep everything in line.

Devil’s Reign #5 begins with Fisk committing to kill Matt Murdock. He then sends his Thunderbolts to collect the Purple Children by any means necessary. U.S. Agent leads the Thunderbolts to find and apprehend them, but the Champions and Jessica Jones show up to save them as they are leaving. Unfortunately, the Thunderbolts have a new recruit, and the Abomination proves too much for the Champions to handle. Saving one of the purple children, they make a hasty retreat.

Fisk now has the power of the Purple Man and most of the Purple Children. Using that power, he wages war on the city. Using the Superior Four, the Thunderbolts, and even the citizens of New York, Fisk controls them to kill every hero. Additionally, he goes to Matt’s apartment but only finds Mike Murdock, whom he beats to a pulp.

TOO LARGE FOR LIFE

This book took the Devil’s Reign event to a whole new level. And for me, it didn’t really work. Devil’s Reign #5 has the people of New York as an army at his beck and call. This isn’t a street-level event anymore; this is now a significant issue. Fisk played his hand, and now the heroes need to react. But that also means we don’t get to see a spicy election sequence between Fisk and Luke Cage. Instead, Fisk is clearly the bad guy who just committed a very public crime. While I am sure that Luke will give a warming speech to rally the citizens of New York, this plot point feels unearned. I wanted to see Luke win the election despite the influence of the Purple Man. Instead, we will get a showdown in the last issue that will determine the future of New York.

I enjoyed the artwork in Devil’s Reign. U.S. Agent having the Thunderbolts logo on the shield is incredibly cool. And ironically, I found myself looking at the detail of Miles Morales’ shoe more than once. These small details helped amplify the story and situation.

This is the weakest book in the Devil’s Reign title event. There are so many good ideas in this story, but Chip Zdarsky went in a different direction than what I wanted. Not saying it was the wrong direction, but it downplayed a plot point that I was really interested in. 3.5 out of 5 stars for Devil’s Reign #5.

7.3 Not my Favorite Issue

Devil's Reign #5 shows us how far Fisk is willing to go and changes the tone and direction of this Marvel event.