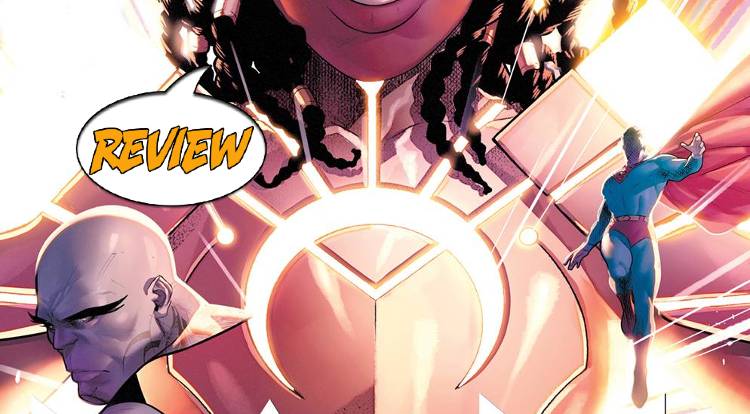 Naomi McDuffie is a Justice League member, but that won’t help her finish high school… or help her parents cope with her new situation. Your Major Spoilers review of Naomi: Season Two #1 from DC Comics awaits!

Previously in Naomi: Naomi returns from Justice League duty to uncover the truth behind the mysteries around herself and her powers. It’s time to address ALL the questions that surround Naomi, her legacy, and her place in the DC Universe pantheon, with a little help from Black Adam, Superman, and the Justice League, plus the return of… Zumbado!

Naomi: Season Two #1 opens with Naomi explaining to her therapist the events of her life since discovering her superpowers, including her interactions with Black Adam, Superman, and being asked to join the Justice League. Her doctor reminds her how incredible it all sounds, but Naomi is more focused on her family and the problems that have sprung up since her alien heritage was revealed. OF course, she can’t talk about how her dad is a refugee from another planet, or how his best friend Dee is actually another alien warrior who took a vow to fight her dad to the death. For his part, Papa McDuffie has been trying to train her in the use of her abilities, but also has no patience for the task, making for more drama. But when she mentions the name “Zumbado” to Dee, everything unravels, Dee disappears, and Naomi is left wondering what just happened.

I WANT TO LIKE THIS MUCH MORE THAN I DID

The first panel of this issue made me angry, as one of the Greek chorus characters from the previous series explains that the entirety of Naomi’s publishing history to date has taken only three weeks. The first issue of Naomi came out in January 2019, which means that the last THREE YEARS of Bendis stories, including six issues of her original series, eleven issues of Young Justice, the last YEAR AND A HALF of Justice League, and various and sundry cameos, have all been over the course of 21 days. I know it’s a cliché to complain about Bendis’ decompression, but… that statement is utterly infuriating. I tried to get past that complaint, but this entire 32-page issue is essentially one conversation worth of story, which feels like a waste of Jamal Campbell’s art and some well-done coloring. Even as much as I enjoy the visuals in this issue, the glacial pacing is truly a problem. There’s a two-page spread dedicated to showing us how alienated the McDuffie family is from one another, which is artistically clever and effective, but feels like a lost opportunity in an issue that moves so little. Naomi’s training sequence with her father is also visually pleasing and fun, but once again, ends up feeling like an inefficient use of page count.

BOTTOM LINE: JUST GIVE US SOMETHING!

In many cases, an issue that opens with a gorgeous double-page splash of Black Adam and Naomi battling to the death would be a smash hit for me, but Naomi: Season 2 #1 hits a sour note in the very first panel that leaves a bad taste in my mouth for the remainder of the issue, then doubles down on its problems by engaging in more endless, aimless conversations, earning a right-down-the-middle 2.5 out of 5 stars overall. Three years and nearly SEVENTY appearances into the character’s existence, we still know little to nothing about her, and even the promises to unravel the mysteries around her origin aren’t enough to make me hopeful about the rest of this series – especially if they’re really going to go through with calling her Powerhouse.

The opening sequence, designed to mirror that of Naomi #1, is the best part of the issue, which barely has any plot at all.

The art is quite nice, though.