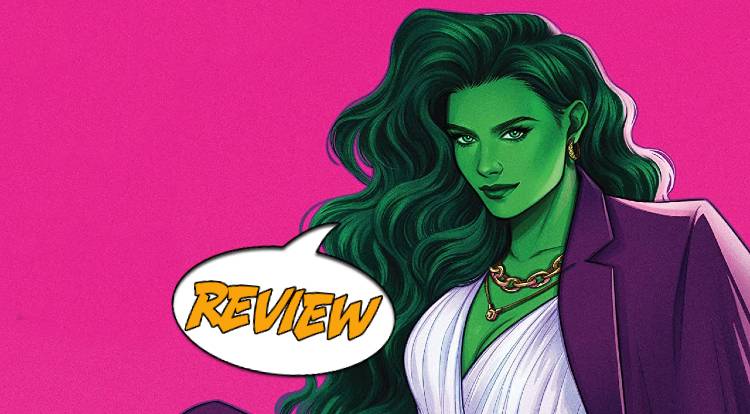 She-Hulk is undergoing what sports teams call “a rebuilding period.” Of course, she didn’t count on Jack of Hearts exploding through her ceiling… Your Major Spoilers review of She-Hulk #2 from Marvel Comics awaits!

Previously in She-Hulk: One of the most dangerous things in the Marvel Universe has just landed in Jen Walters’ lap, and she’s got to figure out what the heck to do with it. And that’s all while putting her life and career back together.

Having finally expended the excessive radiation that turned her into a brutish, savage Hulk, Jennifer Walters has returned to Manhattan and taken up residence in an apartment owned by her bestie, the Wasp. The arrival of Jack of Hearts complicated things, especially since he crashed into her living room with no real memory of how he got there, or how he returned from discorporation. As they talk, Jennifer tries to get him to drink some water, but Jack insists that he doesn’t need to do that, thanks to being a living nuclear reactor. When he finally relents, though, he discovers that he’s incredibly thirsty. He’s also starving, burning through Jennifer’s pantry and fridge before telling her that he doesn’t need sleep anymore… as he passes out on her sofa. The next morning, he’s still out, so She-Hulk heads off to her new job at Mallory Book’s law firm, but the final page reveal indicates that there’s more going on with Mr. Hart than meets the red-tattooed eye.

JACK OF HEARTS DIES *A LOT*

People who have been keeping up with The Reckoning War crossover know that Jen and Jack seem to be dating there, something that this issue’s meet-cute begins to set up. The first two issues of this series have been all about personal interactions, whether with She-Hulk’s friend the Wasp, her frenemy Titania, or her nemesis/new boss Mallory, and I’m 100% thrilled. After several years of monosyllabic punching, seeing the old She-Hulk joie de vivre is wonderful. Rowell’s scripting is a big part of my enjoyment, as it recombines bits of lore in new ways, from Jack being able to track She-Hulk because of the time he drained her gamma radiation, to the Wasp’s subtle ways of helping. The downside of that comes in that this issue is essentially just one conversation between Jack and Jenn, and while I personally love seeing her rebuild her life, I can also see people being dissatisfied at a lack of big action sequences. The art is quite good in the action we get, though, with a particularly joyful example coming in the kitchen sequences, as Jack downs nearly all the food in Shulkie’s apartment. Antônio walks (you should excuse the expression) a fine line, getting quite a bit of detail in Jack’s notoriously busy costume, while keeping an open, clean, almost simple line.

All in all, She-Hulk #2 continues where the first issue left off, rebuilding Jennifer Walters’ life and her law practice a bit at a time, and it makes for an engaging read with the promise of danger and adventure in the near future, bringing back the Sensational She-Hulk of yore and earning a well-deserved 3.5 out of 5 stars overall. I hope that the upcoming TV show means that this book gets to stick around long enough to continue with this slower, more deliberate pacing, because I find it very enjoyable.

She-Hulk welcomes an old friend, and while it's mostly conversation, it's still a fine read with well-done art. Also: That last page surprise got me.