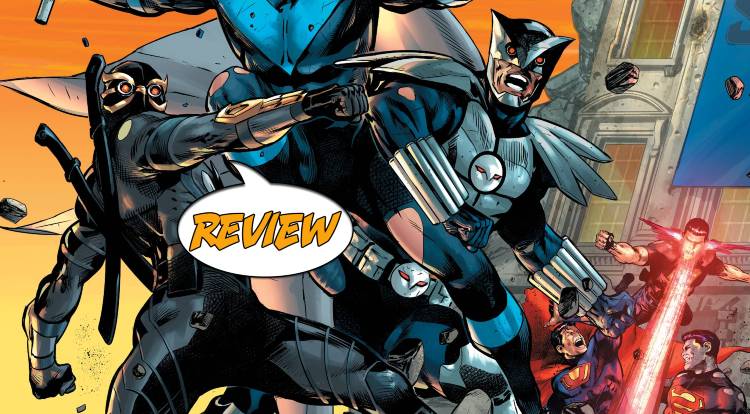 The Titans and The Flash are on their way to Earth-3 to face the most dangerous threat on either world: Amanda Waller! Your Major Spoilers review of War For Earth-3 #1 from DC Comics awaits!

Previously in War For Earth-3: Amanda Waller intends to take over the alternate world of Earth-3 and dethrone evil versions of Superman, Wonder Woman, and other heroes that rule it. Her former partner, Rick Flag, has other plans, as he’s bent on making Waller pay for her crimes, while the Titans and The Flash hunt for a missing Titans Academy student they believe was kidnapped by Waller to form her mysterious Justice Squad.

MEANWHILE IN THE MIRROR UNIVERSE

On the horrible, backward, morally inverted world of Earth-3, Ultraman and the Emerald Knight (an evil John Stewart) are receiving tribute from various lackeys and underlings, when a portal opens from Prime Earth. Out of the dimensional gateway comes Amanda Waller and a literal army of super-muscle from across the multiverse. Ultraman is enraged, but is even angrier to find his teammate Owlman having sex with Superwoman, who is ostensibly his property. (Bad is good on Earth-3, and misogyny is bad, so…) Amanda’s army takes down Emerald Knight, causing Ultraman to counter by sending Owlman in with a ship bristling with weapons of mass destruction, only to have another member of the Syndicate fall to Waller’s army. While she calls for parlay with the evil Superman, Rick Flag and his team of former Suicide Squad survivors are dealing with a Clayface left behind by Amanda to kill him, saving the day with the power of a new metahuman and Ambush Bug’s fourth-wall-breaking abilities. They finally break through the dimensional barrier, only to find that Waller has made her case with Ultraman and he and Emerald Knight are now working with her.

ALWAYS WITH THE BONDAGE

Superwoman being into bondage, whips, and leather has been part of her character since Grant Morrison’s Earth-2 book over 20 years ago, but this issue ups the ante by showing her in flagrante delicto with Owlman. The intent is clearly shock value, but it does feed a strong moment later in the issue, as Amanda wins Ultraman’s trust by having Talon kill Owlman in cold blood. The bulk of this issue is fighty-fighty, with the strongest character moments being given to odd people. Black Hand, Match, The Talon, and (incredibly) Ambush Bug all have great moments in these pages, and Waller’s gambit at the end is kind of magnificent. That said, the attempts to make this issue feel like a big wide-screen experience also metaphorically zoom out the story focus, as best seen in that fact that we only see six or seven members of the giant invasion force, which sort of undermines the point that anyone in the Squad can die. I mean, how can we care if a random costume behind Gunhawk dies if we don’t even know who the hell they are?

There are things to like about War For Earth-3 #1, but there’s also a lot of metaphorical noise in the signal, starting with the double-sized price tag, dialing down the threat level of the Crime Syndicate, pushing Waller’s schemes over the top, and trying to echo the murderous black humor of Gunn’s The Suicide Squad film, earning 2.5 out of 5 stars overall. It is impressive that the multiple art teams are able to transition as seamlessly as they do, and I am interested in seeing how this interplanetary war plays out. Just maybe let’s stop kink-shaming Superwoman, okay, DC?

This issue features two writers, six artists, hundreds of superhumans and a ton of back-stabbing, coming together into an explosive (and not entirely coherent) whole that doesn't really earn its price tag.