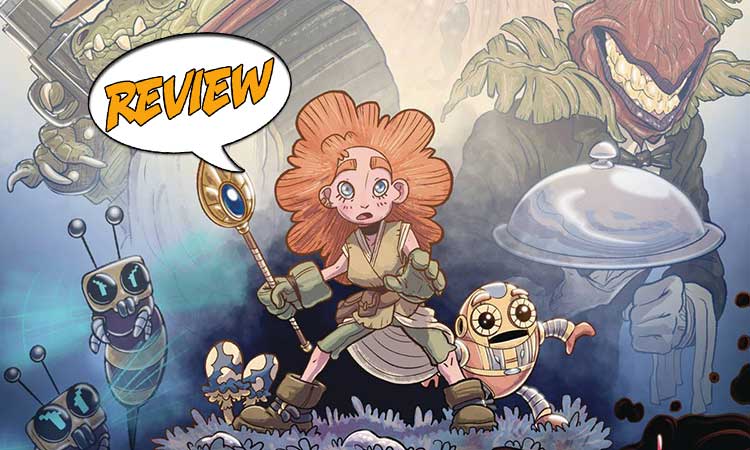 A run-in with robot bees leads Juniper and Toby to a strange house on a cliff. What adventures await them? Find out in Juniper #1 from Scout Comics! Previously in Juniper: On the planet of Nerth, the only human girl is the plucky Juniper. She is searching for a lost friend with the help of a robot named Toby. One thing leads to another, and pretty soon she finds herself in the midst of an adventure!

ONE COMPLICATION LEADS TO ANOTHER

Juniper #1 is one of the titles under Scout Comics young reader imprint, Scoot, and I have to say it is zany and pretty fun. It opens right in the middle of the action as Juniper and Toby run across a field pursued by some seriously large bees. The bees accuse them of stealing honey. Their mad dash leads right into a dead-end, and Juniper desperately shouts that this must be a misunderstanding. One of the bees, using its headset, calls back to the hive to relay this to the Queen. The Queen says that’s a lie and orders her army to attack. But Toby finds a little hole in the cliff, and he and Juniper sneak through.

They find themselves in what appears to be a warehouse belonging to the Slobbe Company. Toby starts singing a jingle about their “oil-tinis” when they hear someone coming. The door opens and in comes what looks like a walking carnivorous plant. Juniper and Toby try to make a dash for it but are caught and the plant accuses them of being goblins. They vigorously protest that they aren’t, and the plant recognizes that they are youngsters. It changes shape into something still plant-like but much less terrifying and introduces itself as Stanley. He offers Juniper some tea and Toby, the robot, an electrical charge.

Stanley mentions that his master, Clarece, should be back shortly. She has gone exploring, searching for lost treasure. Toby rummages around and decks himself out with clothes and jewelry he finds. Juniper humorously scolds him for trying to steal stuff and as he slips out of the clothes, a note falls out saying this is a safe place and this is where they were meant to be. Stanley does not know who wrote the note, but says the house tends to keep secrets.

As Stanley double-checks the calendar to find out how long he had been asleep, Toby asks if they could stay there for a while. Apparently, Junipers’ and his last place got run over by rhino ants. Then Stanley realizes he was asleep for forty-five years. Juniper offers to go find Clarece. Stanley offers to give them the house if they can find her. Next stop – the Ivory Tower!

The art of Juniper #1 is full of fun. The linework is straightforward, and the action comes with some exaggeration and looseness, so it feels energetic. We can tell right from the start that this is a world that blends fantasy elements and future tech. The bees, for example, are large and seem to be robot bees. Their eyes are like digital displays, and they fly in a regular formation. But what really grabbed when was when one of the bees phoned home. Wearing the headset is a terrific touch, but the Queen Bee is something else. She’s mostly human-looking, apart from the striped abdomen, but she is sprawled on a pink upholstered bed with a fancy old-fashioned phone and a little crown. There is much humor to be had here.

The scenes with Stanley are delightful. When he is in his threatening guise, he looks pretty sinister for an all-ages book. We don’t see his eyes. His face just has a very large, very toothy grin and he makes a lot of odd noises as he moves about. Juniper and Toy react with wide-eyed terror which sells us on his being something really scary. When he adjusts himself, he is much more mild-mannered, and I think the bow tie is a great touch.

Juniper #1 is a lively book that I find appealing. It’s priced at a point that is great for younger readers. The characters are straightforward and there is a good balance between the funny and the scary moments. Plus, this sets up a mystery along with the adventure which keeps it interesting.

Juniper and Toby have fallen on hard times, but they find their way into adventure!