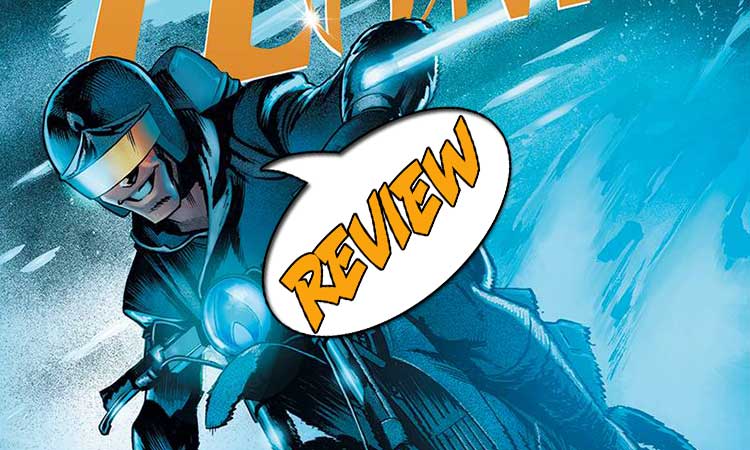 Yarix is a strong opponent at the trial, but why does he almost seem to be helping the Blue Flame? Find out in The Blue Flame #7 from Vault Comics!

Previously in The Blue Flame: Madison the journalist researches the Blue Flame and finds an episode where the vigilante team rescues a young child, but there is no doubt that the whole episode was also traumatic for the child. Were they heroes or not? This connects to the trial, where the Blue Flame tries to explain that they were indeed heroes, but the opposing Council points out that these are idealizations and not the individuals. And as it turns out, they all had problematic pasts. On Earth, Sam’s sister’s boyfriend, who came to the U.S. when he was two, has been picked up as being undocumented. Sam goes looking for the person who turned him in.

DEALING WITH THE FLAWS OF HUMANS

The Blue Flame #7 opens in space where Yarix hands a weapon to Flame, asking him to use it on him. Flame does not trust him. Yarix explains that he thought maybe he had found a loophole to get out of his service as Council. Yarix is very good at what he does, but he does not want to win anymore. He wants to lose, but to lose legitimately. It’s the only way he knows that other civilizations will be safe from what happened with his. Flame demands to know more, and with the help of the Living Archive, Yarix shows him. His homeworld seems relatively unremarkable, but he says the people were self-absorbed. When the Judgment Craft arrived, they unleashed a strong acid around the entire planet, destroying every living thing in the process. Sam asks Yarix if he believes in a god, a higher power, something that is the source of all things.

On Earth, Madison agrees to take Dee to see Mateo. Before they leave, though, the police show up looking for Sam. Sam asks if they can delay this, if he can just come down to the station later, but they cuff him and take him away for the assault on the man who turned Mateo in. Dee and Madison to go to the facility where Mateo is being held. He is determined to escape and to be with Dee when their child is born. Madison wants to try to do something to get him out.

The Blue Flame and Yarix continue to talk. Yarix’ role with the Consensus is not just because he was a good candidate; it is additional punishment for him. With every case he wins, he gets to watch another civilization be annihilated just as his was. In his previous life, he was a solitary cynic who never tried to change things. The Blue Flame is puzzled; he is the opposite. He has spent his entire life trying to make a difference. Yarix challenges him. Has he really tried? Has he done everything he could? Has he done anything since his injury?

On Earth, Sam knows this. He calls Madison. She accuses him of being selfish and even prideful. He thinks he is better than other people, yet he is unwilling to admit that he is no better than anyone else. Dee pays his bail but wants him out of the house. He accuses her of giving up on life and also tells her that maybe that is better. Dee talks with Madison, who tells her what Sam told her. Dee realizes he may be delusional and feels bad for kicking him out.

The Blue Flame has another idea for his defense. He wants to go back to the beginning of everything and find out if there is something like a god, something that might be able to overrule the Consensus.

TRYING TO MAKE A DIFFERENCE

The Blue Flame #7 is a study in contrasts, especially in Sam, but he is in a way the allegorical character that indeed stands for us all. In his guise as the Blue Flame, he is the quintessential hero, strong and capable. The expectation is that he will be able to handle anything he faces. But the challenge of representing humanity at an alien trial is hugely out of scope for him. And then there is Sam, who thought he was a hero and now is struggling even to survive. Without his strength and powers, life is difficult. He is not someone who is used to asking for help. But maybe that is what he needs to do.

Yarix’ story is interesting and chilling. All along, and even here, he is as much an ally to the Blue Flame as he is an adversary. It has seemed strange that he would want to be so helpful, and then would counter the Flame’s arguments at trial. The briefly told story of his planet shows that we can identify with them. The scenes of the acid attack are not overly gory, but the terror is palpable. The aftermath, though, is seriously striking. The two of them are left alone on a world that is a dead ball of rock with all life scoured from it. And amid that desolation, the Blue Flame really understands what is at stake.

The Blue Flame #7 is not a cheerful story. I would say it is not even optimistic, except that part of Sam’s character is a slender but persistent thread of hope. Will it be enough to get him through the trial? Only time will tell.

The Blue Flame learns about the destruction of Yarix’ planet and gets another idea for his defense.