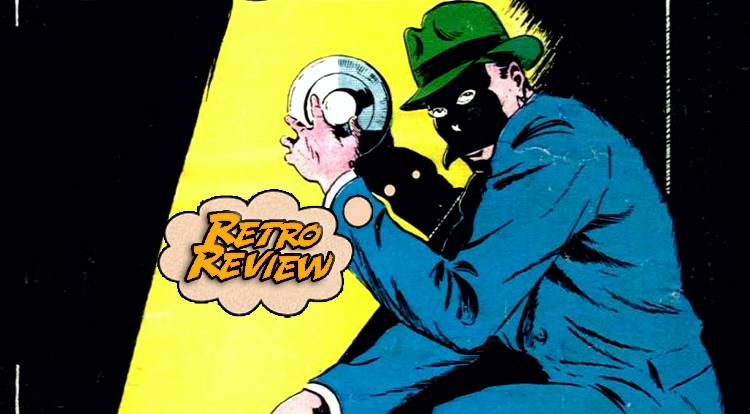 The first modern comic book was published in 1934. Superman kicked off modern superheroes in 1938. And in between, there was The Clock… Your Major Spoilers Retro Review of Funny Picture Stories #1 awaits! Previously in Funny Picture Stories: Formed by the managing editor of the companies that would become DC Comics, the short life of the Comics Magazine Company is one of the more interesting stories of the Golden Age of Comics. From May of 1936 through June of 1937, they published a number of titles that featured artists from National (DC) Comics and at least one character (Siegel & Shuster’s Doctor Occult) made an appearance in a CMC book as “Doctor Mystic” before returning to National, where his story picked up from the CMC cliffhanger! CMC folded in 1937, with their properties purchased by Ultem Publications, which was then bought out by Centaur Comics. By that time, though, today’s feature character had already been purchased by yet another publisher, Quality Comics, reminding us that the publishing game in the early days of the 20th Century was like the wild, wild west.

But that’s still in the future. Right now, we witness the debut of… The Clock! In the interest of full disclosure, there is some question about whether or not this issue IS the first appearance of the mysterious masked man. The Clock appeared in two books dated November of ’36 – this issue, with a street date of October 18th, and Funny Pages #6, whose on-sale date is unrecorded. Funny Pages’ story is only two pages long, though, which makes this one a better choice for our Retro Review purposes. The story begins with a report of a jewelry store robbery, followed by a visit from the store’s owner to the police chief, threatening to “have [his]shield” if the precious gems aren’t recovered. Under the city, a mysterious masked man also has his eyes on the purloined preciouses, setting out to question the night watchman. And that final panel, my friends, is a historic comic book moment: The first appearance of comic books’ first masked hero, nearly two years before a certain Man of Steel. The Clock, in these earliest appearances, reminds me both of The Green Hornet (whose radio program debuted in January of 1936), and The Shadow, a merciless avenger with a big gun and no tolerance for criminals. Case in point: When the watchman refuses to answer his questions, he drags the man into his subterranean lair, all the better to threaten him with torture and certain doom. The terrified security guard spills his guts and is thrown in The Clock’s brig for his troubles, while the masked man sets out to find his partners-in-crime and the stolen gemstones. The thugs aren’t impressed by the sharp-dressed intruder, having not yet heard of The Spirit or The Bat-Man, but The Clock quickly turns the tables and cleans their collective (you should excuse the expression) clocks. It’s remarkable how clear and detailed George Brenner’s work is in these pages, at a time when limitations of printing made simpler art easier to reproduce. Brenner is probably best known for creating this character and for later work at Quality Comics (like Bozo the Iron Man and the cleverly conceived 711), but for my money, the best part of this story and of the character is Brenner’s veil-like mask. The face-covering feels like the shape of things to come, a steppingstone between the Shadow’s cloak-and-scarf and the cowls and facemasks to come. (Lee Falk’s Phantom, having debuted in February of the same year, had already combined a cowl and a domino mask.) Our short-and-sweet story ends with the vigilante sending a hand-written note to the police chief, urging him to take credit for the collars. The remainder of Funny Picture Stories #1 is full of funny animal, adventure, and science fiction strips, none of which have the visual pop of Brenner’s work, but it’s The Clock’s debut (and the beeeeautiful, iconic Brenner cover) that make this one tick, leaving us with a better-than-average 3.5 out of 5 stars overall. As for The Clock himself, echoes of his adventures can be easily seen in The Spirit, The Sandman, and more, and even in the dark streets of Gotham City. Whatever you do, though, don’t try to make one cohesive continuity out of his multiple publishers and various reboots: That way lies madness.

Remarkable art for an era known for primitive-and-simple pictures, combined with a no-nonsense story, makes the debut of the first masked comic hero a simple-but-effective affair. But you can't help but love that cover!