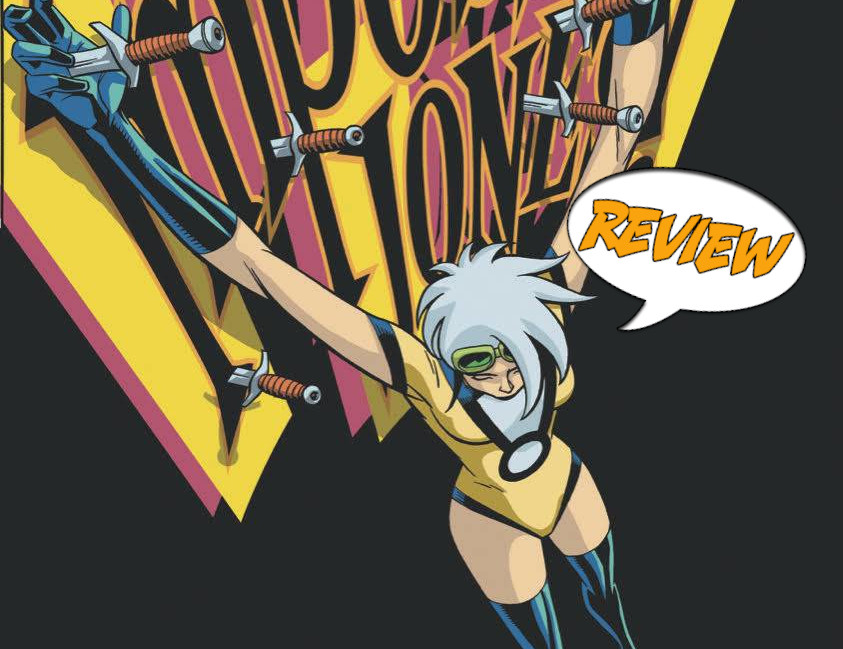 Impossible Jones #3 begins with a flashback. Even Stevens walks the streets in his superhero persona when he is suddenly attacked by Bloodblade! For Even Steven, everything must be fair and always uses the same force and weaponry against his opponent. Even Steven defeats Bloodblade but not before taking a deep wound. This fight led Ms. Lamonde and Ms. Fosca to recruit Bloodblade. Now he is the Saint of Knives defending Fosca from Impossible Jones!

However, the last couple of pages show Jimmy getting a visit from a Homewrecker.

There is a ton of action in Impossible Jones #3. I really enjoyed getting to know who the Saint of Knives is and understanding his backstory. I was even fine when Polecat jumped into the scene. But when Captain Lightning arrived, I was a bit fatigued. Every character introduction takes time and slows down the pacing, and the characters got less and less attractive as they were introduced. Saint of Knives and Fosca seems super interesting. Polecat is humorous, but Captain Lightning feels like a stick in the mud. This is a little frustrating because the storyline and plot feel solid. Introducing these heroes tells us that there are things in this world, but it just didn’t feel like the right time.

With that being said, I enjoy Impossible Jones developing her own ideas on heroism. Sometimes she is a thief, other times a wanna-be killer, and in this issue, we see her as a hero. I wonder what is going to stick in the conclusion next issue.

This comic has many great ideas, and I think it is a worthy story to tell. Despite my pacing concerns, I believe this is an excellent comic to pick up, and I am excited to see what happens next issue. 3.5 out of 5 stars for Impossible Jones #3.

Impossible Jones #3 is an excellent premise with a great protagonist but suffers from some pacing issues, in my opinion.