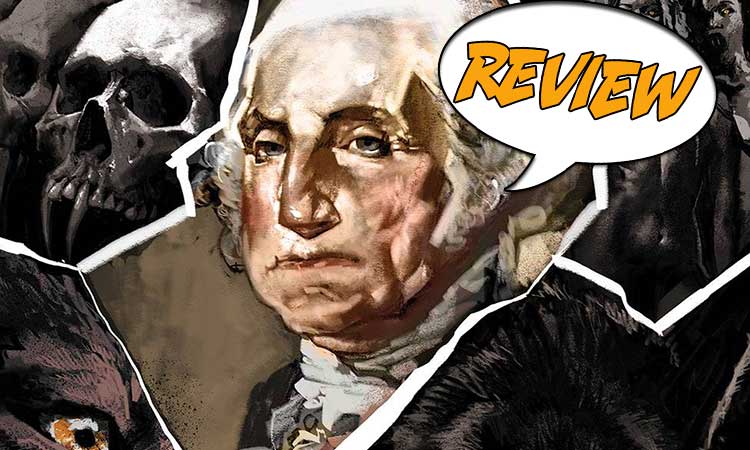 The Sangsters have new allies in their fight against the vampires, but what if John Adams was not the origin of this struggle? Find out more in Killadelphia #19 from Image Comics!

Previously in Killadelphia: Vampires fight to gain a foothold in this country under the leadership of Abigail Adams, now in alliance with Thomas Jefferson. John Adams, feeling the consequences of the plan he put into motion, joins the Sangsters in their fight against Abigail. SeeSaw treated with Anansi to put an end to the fighting, but the god cannot override the free will of his people. SeeSaw meets Tituba, another historical figure who has been reborn, but not as a vampire. The undead have been living in the shadows, but the upcoming war is drawing them out.

AN EVEN OLDER PLOT COMES TO FRUITION

Killadelphia #19 opens with philosophical musings by a new player on the playing field. We have not previously seen his text boxes. The narrator observes that humans go to great lengths to avoid death. He does not just mean one’s own personal mortality, but death itself, the realization that at some point, we cease to exist. But instead of simply accepting this, they have hope. And right now, at this moment, that hope is SeeSaw. And the narrator, it turns out, has plans of his own, so there is someone else here playing perhaps an even longer game than Adams.

Jimmy and Jose are safe for now and Jimmy is coming to grips that he is now starting to know and appreciate the father he once hated and did not understand, and he may be on the brink of losing him again.

We flash back to the Battle of Trenton in 1776 as the narrator remarks on just how incredibly hard men will fight if they believe victory is possible, if they have even a thread of hope. He was their hope, and he led them to crucial victories. He was George Washington. Talk about throwing another wrench into the works! He observes that the humans’ battle now is much like his at Trenton. SeeSaw is giving the people hope, and he must be eliminated.

John Adams meets with Abigail. He still loves her. She once did, but after two hundred and fifty years, she has found her own life and it does not include him. Tituba and her werewolves wreak havok among the vampires. James Sangster comes face to face with Abigail and sees her as the source of the current problems and he attacks her.

SeeSaw, who has been trying to move beyond the conflict, gets the feeling that something has changed. He founds himself surrounded by several women who attack him and drag him away.

MOMENTS OF CALM WITHIN THE STORM

As Killadelphia #19 opens, we see that the violence continues. However, the vampires do not always have the upper hand. It isn’t just because of SeeSaw’s magic. Humans, working together, can stake a vampire through its heart. The werewolves have changed the battle dynamics as well. I like the juxtaposition of the horrors of this fight and Washington’s calm narration. Again, we see someone gifted with immortality who also sees himself as being somehow distanced from the conflict. We suspect that this could be Washington because we’ve seen the cover of the book. Still, it is chilling to see this unfold.

One of the things I truly love about this book is that despite the relentless horror, there are moments of human emotion that are poignant. Despite their fear, Jimmy and Jose have found love and manage to have some moments of calm. John Adams loves, or at least truly believes he loves, Abigail and still does not understand her fury. We have seen it before with other characters, like SeeSaw, who are vampires, but want to find their own way and not be dragged into the crowd. Those moments of humanity seem so fragile, yet still they persist.

Killadelphia #19 is the start of a new arc. While there is some amount of chaos to this issue, it helps re-establish the factions in the conflict, so it is a solid jumping-on point for readers curious about the series.

The battle for Philadelphia rages on with werewolves now helping humans against the vampires.