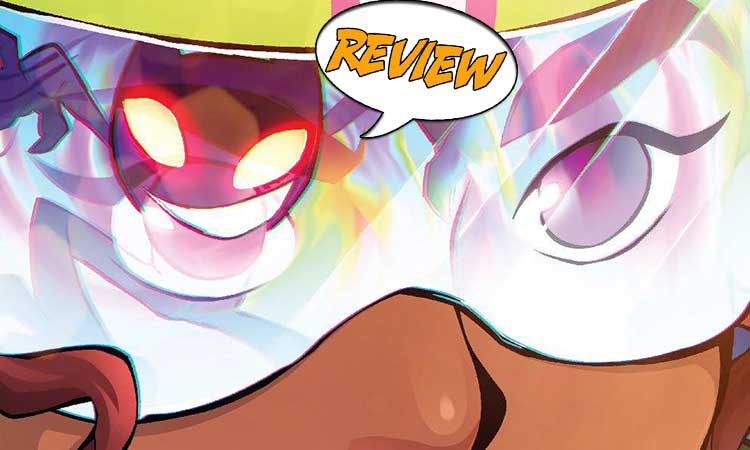 Negatrixes are taking over the town! But before she can save everyone else, Dizzy needs to get rid of her own Negatrix. How can she do it? Find out on Getting Dizzy #4 from BOOM! Studios.

Previously in Getting Dizzy: It’s getting close to time for the big competition! Dizzy’s friends are planning ways to counter the Negatrixes and Dizzy starts to feel like she isn’t contributing anything. On the morning of the competition, the skaters are disappointed when they find that the Mayor has outlawed all wheeled sports. This isn’t what Dizzy was expecting, and she doesn’t quite know what to do. Then she learns that she wasn’t a special Chosen One – anyone who found the portal could have become the Burb Defender. Dizzy has a crisis of confidence, but when she goes past the Mayor’s latest rally, she realizes the Mayor has a Negatrix. So do many of the people in the crowd. Is it too much for her to handle? Then she scans herself with her visor and discovers that she also has a Negatrix!

As Getting Dizzy #4 opens, we find Dizzy in a darker place than perhaps she has ever been. But her friends come to her and offer to help. We also get a little flashback of Dizzy’s memories of her mom. Her mom has always been independent and self-sufficient. While she never expected the same of Dizzy, she set an example that Dizzy has been trying to live up to. But with some thought, Dizzy realizes that she is her own person. She does not have to be exactly like her mom, and it is okay to accept help. This message is so powerful. It’s the unverbalized expectations that can be so hard to live up to.

Dizzy makes her choice, but her gauntlet is not working, so she has no way to blast her Negatrix. Then Scarlett compliments her, and Dizzy acknowledges that that is one of Scarlett’s strengths. Her gauntlet gets a little surge of power. It is not hearing positives from other people that charge it; it is being able to see and verbalize the positives in others – and to see and acknowledge the positives in herself. Together they defeat Dizzy’s Negatrix.

But there still is that little problem of the Mayor’s rally. They go there and Dizzy blasts some Negatrixes. They leave many of the people but coalesce around the Mayor. AV calls it the Mega-Negatrix (which is adorable!) It lets loose with a sticky substance that holds people in place as it tries to influence them through the Mayor. Scarlett asks Dizzy what to do. Dizzy, in turn, asks Payton for a strategy, and she, in turn, sends AV to cut off the microphone and tells Dizzy and Scarlett to distract the Negatrix. They do so, but Dizzy realizes Scarlett is the nimbler skater. She makes the tough decision to give her the gauntlet.

That’s only the start of the fight, but Dizzy does learn how to handle the power of positivity. There is a bunch of character growth, as well as a little epilogue that hints that just maybe, there could be more. I don’t want to spoil the ending because it is truly charming.

THE COLORS OF TEAMWORK

Getting Dizzy #4 has art that is colorful and fun. It is delightful that the Power of Positivity that is a theme is colored in rainbow colors, and not just in chunks or bands of color. It’s in a random, swirly pattern reminiscent of tie-dye and controlled by the borders of the area where this special effect is located. It’s a really cool way to do it, and it fits perfectly with the style and flavor of the book.

Hands are a big symbol here, both offering hands in help, and reaching out to accept that help. I like how this links to the gauntlet that Dizzy has. Those same hands control the power to destroy the Negatrixes. Those same hands share the power back and forth and together. There is such a strong message of coming together, of helping out – of lending a hand, as it were. I appreciate a book that can communicate this through the imagery because it comes across with a lighter touch than all being through the words.

BOTTOM LINE: PULLING IT ALL TOGETHER

Getting Dizzy #4 is a terrific conclusion to the story. This is a great book for younger readers, and I certainly enjoyed it a lot. The characters are relatable, and their growth feels real. I also liked the Negatrixes as a way to personify negative emotions and make them appear like something that can be defeated. Getting Dizzy is a breath of fresh air.

The power of individuality and the power of teamwork are not mutually exclusive.