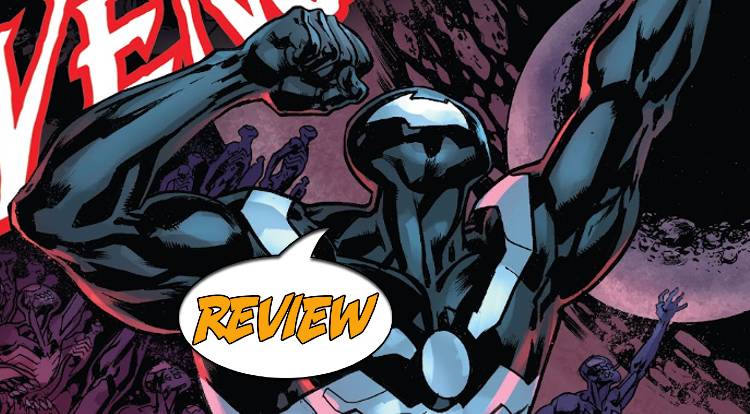 Eddie Brock has become unstuck in time. And so it goes… Your Major Spoilers review of Venom #5 from Marvel Comics awaits!

Previously in Venom: His clashes with the Life Foundation may not entirely be over, but Eddie Brock has bigger fish to fry. There are answers on the horizons, but what do they mean for Venom, for Eddie, and for Eddie’s son, Dylan?

THE GARDEN OF TIME

As the last issue ended, Eddie Brock’s son Dylan had broken into the Life Foundation and bonded with the symbiote known as Venom. Of course, time is an illusion (lunchtime doubly so) and so we pick up this story in the middle of the previous one, as Meridius sends out the Bedlam symbiote. We then jump back to Eddie’s emergence in the Garden at the end of issue one, then back and forth through the events of the series to date, We also witness Eddie’s first interactions with the previous and subsequent symbiote kings (Spoilers: A fistfight erupts), all the while revealing how Meridius’ hand has been in virtually all the events that have led to Eddie’s chronofracture and Dylan’s new host status.

Then, as Venom #5 ends, we get the most shocking moment of the series so far.

TIME IS A HARSH MISTRESS

Al Ewing has been a creator to follow since his days on Mighty Avengers, and even my apathy towards Eddie and his goopy counterpart can’t change that. In reading this issue, I was immediately immersed and went back to read the previous four issues before going back for a second run at this one. Without context, it’s a good story, but after seeing how it all fits together, it becomes a pretty great one. The art of Bryan Hitch is perfectly suited to this one, what with his skill at drawing shiny, form-fitting suits, and the design of Eddie’s King In Black self is perhaps my favorite Venom look to date. Add in the visceral beauty of the fight between Venom and the giant Bedlam and you’ve got a book that is both visually stunning and narratively excellent. Now that Venom is one of Marvel’s big movie stars, his stories have to get bigger and this issue is an example of a really great way to graduate Eddie to the upper-tier of Marvel, in power and scope.

The truest test of the success of Venom #5 is that I went in not really interested in the character and left having purchased all five issues on the strength of the art and the compelling story, with a time-travel conceit that not only works, but deepens the enjoyment of previous issues of the book, earning 4 out of 5 stars overall. It’s good to see Eddie Brock out of Peter Parker’s shadow and on to his own top-notch adventures.

This issue's story actually seems to take place between the moments of the first four issues, and it's really fun to unravel it all, while Eddie's new look (courtesy of HItch) is really cool.