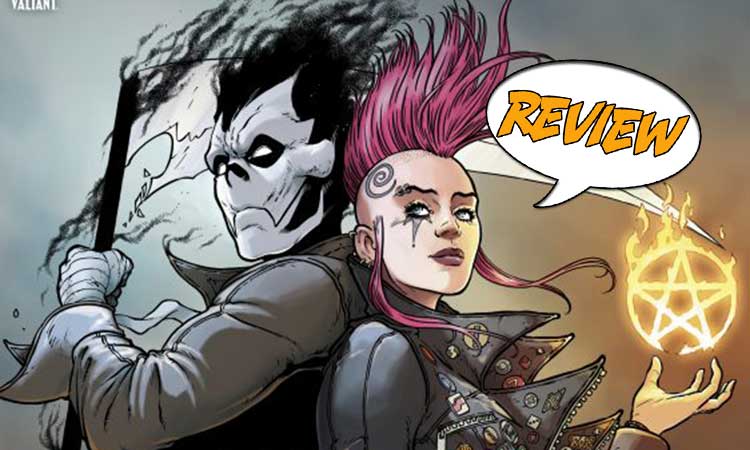 Shadowman has a profound realization about the Deadside, but if no one listens to him, will he still be able to hold the Deadside and the Blights at bay? Find out in Shadowman #6 from Valiant Comics!

Previously in Shadowman: Jack has been busy dealing with Blights from the Deadside around the world. He also realizes that the Deadside is the Loa to the Earth, and it has a personification. Alyssa puts together a team for him, the New Abettors, but he is too distracted considering his own experiences with the Shadow Loa to consider their help. The next Blight he faces is caused by a little boy desperate to have his mother back from the dead. Shadowman resolves this, but the boy only knows that a monster taught him the spell. Meanwhile, Blights in the Deadside want to get to earth, but keep finding their way closed. Then Shadowman comes to the Deadside and asks to talk to their Queen. He wants to talk. But this angers the gods of the Loa – Jack was chosen to be a warrior, not a peacekeeper.

Shadowman #6 opens at a creepy abandoned hospital in Missouri. Shadowman is there and he can tell a Blight is beginning to form. His introduction reacquaints us with what is going on, but it is also poetic and evocative, tying the memories of the hospital and the process of its decay to the heart of the Blight. This particular Blight is a horror movie theme unto himself, luring people there where he subjects them to “surgery” and offering their corpses to Deadside demons.

In New Orleans, Alyssa goes to a cemetery with the New Abettors. She knows there are malevolent spirits there, but if they stay near their lantern, they should be safe. They are there to talk to Punk Mambo. Alyssa warns her that the Deadside is trying to take on a physical form. Mambo claims this isn’t her problem, but Marie talks to her, and she grudgingly agrees to help. I am not familiar with Punk Mambo, but even in this short scene, she is intriguing and full of attitude.

Shadowman talks with the Blight and the demons with it. He is sure that their attack on Earth is not going to give any of them the paradise they seek. Instead, their presence will simply turn Earth into another Hell. It’s an interesting speech, and I think it can be read more broadly as being about the difficulty people have with recognizing that death is a part of life.

He is suddenly struck down, and he recognizes two old adversaries, Master Darque and Sandria. Deadside must have recruited them as generals. They in turn mock him for his attempts at saying they can make the Deadside a better place and then they order the Blights to attack. Shadowman makes another great observation – it is easier for them to do what they have been indoctrinated to do as opposed to listen to him at all. In other words, it is difficult to challenge your own beliefs.

Shadowman races through the hospital, where someone calls his name. It is Samedi, as someone dead or dying, there only for a moment, but there to warn Jack that the pantheon will not be with him. Deadside arrives and claims that the Gods of Voodoo have aligned themselves with her. She further mocks him for trying to save Earth, when it is the Earth, with all its hate and fear, which have summoned her.

Punk Mambo arrives with the ghost lantern, which holds back the Blights and Deadside for a moment. The light won’t last long. What does that mean for the world?

IN AND OUT OF TWO WORLDS

The art of Shadowman #6 is dark, but rich in that darkness. One of the core concepts of Shadowman is that he is the guardian between realities. We constantly get a feeling of overlay in the images. Right from the beginning, the abandoned hospital is a perfectly atmospheric setting, but also see it as an institution with all the windows lit. It is empty and falling apart, yet the source of the Blight has a macabre surgical suite full of equipment. We don’t see so much of his murder victims directly, but we do see the forms of denizens of the Deadside waiting to be able to take on a body.

Master Darque and Sandra are cloaked and masked. As Shadowman starts fighting them, we see their human forms briefly as glowing and purple, as though they are spirits or a made from energy. This purple energy nearly crackles off the page as they fight. Darque also has his own personal font which is a terrific touch. Despite also being in black speech bubbles, we can tell him apart from Jack easily.

I really enjoyed Shadowman #6. It is a solid chapter in a story that is building toward a dramatic climax, but it shares some profound thoughts, as I mentioned above, about the role death has to play among the living.

Jack’s message to the demons of the Deadside fall on deaf ears, and even the Gods of Voodoo have turned against him.