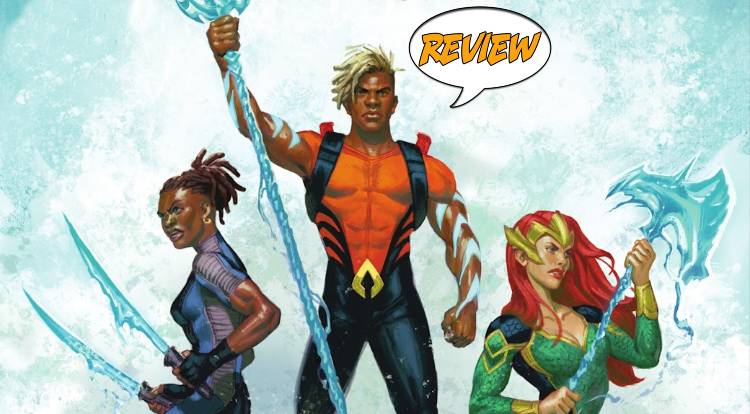 Jackson Hyde must take up the fallen mantle of Aquaman. But can he rise to the occasion? Your Major Spoilers review of Aquaman: The Becoming #6 from DC Comics awaits!

Previously in Aquaman: The Becoming: Jackson Hyde races to stop the next big undersea terrorist attack… and this time, Mera’s the target! But if he hopes to overcome his greatest enemy yet and protect the people he loves most, he’ll have to stop waiting for someone to give him permission to lead. It’s time for Jackson to reach out and take the mantle of Aquaman!

THE SINS OF THE FATHER

In the submarine world of Xebel, Mera has come to give an important address, one that could be the key to peace between her home and Atlantis, but some of the Xebelians have their own ideas. When a bomb goes off, Mera manages to protect herself, but is taken captive by a group of separatists, led by Meeka, the stepmother of Deluge, Jackson’s half-sister. Jackson, Deluge, and his mother Lucia (herself an expatriate of Xebel) bust in and save bystanders, but the conflict between mother and daughter leaves Delilah terribly wounded. The sight of his mother near death sends our new Aquaman into a blind rage, and his vengeance on his mother’s attacker looks quite fatal. He gets his mother to an Atlantean medical center, but refuses to talk to Arthur or Mera, instead dedicating himself to training in The Well, preparing for his role as Aquaman. Realizing that the situation is grim, Arthur heads off to Iceland for assistance with his former sidekick.

TAKES A LITTLE FIGURING OUT

The title of this issue is ‘Before And After’ and the plotting fits that by jumping back and forth in time, with none of the events appearing in chronological order. That’s not a problem, necessarily, but this issue actually required a bit more diagramming than I expect from a regular 20-page comic book. That said, the events of this issue are dramatic and engaging enough that I really WANTED to figure it all out. The art is quite attractive as well, with special kudos for the final page splash, as a bemused Arthur drinks a beer with Black Manta’s trident at his throat. It’s a well-done page that convinces me to pick up the upcoming Aquamen #1, where this story will continue. The possible reunion of father and son adds drama to the proceedings and while I’m a little tired of every DC hero having their parents maimed, killed, or bisected, Lucia’s injuries make things more complicated for Aquaman.

If you were disappointed by the abandonment of the 5G plan to make Jackson the new ongoing Aquaman, then Aquaman: The Becoming #6 should be right up your alley, combining strong art by two different teams (who are not, sadly, quite seamless) and an exciting, if difficult to follow plot, earning 3.5 out of 5 stars overall. The only remaining question seems to be how Aquaman and Aquaman deal with their new equal partnership, which I’m excited to read about.

The back-and-forth in time conceit makes it a little difficult to follow, but it's got some lovely art, Jackson Hyde at his finest, and a cliffhanger that makes me want to come back for the new Aquamen ongoing series.