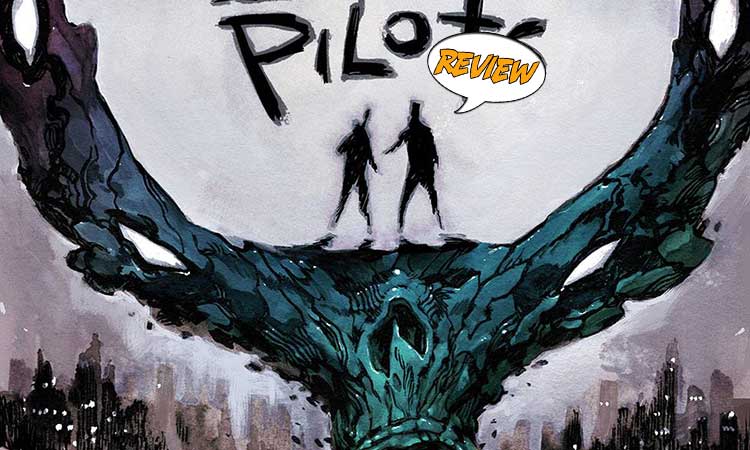 As Ami and Meg battle, Rip and Buzz search for the Old James House’s seventh and final ghost. But what more do they stumble upon in the abandoned town it is in? Find out in Home Sick Pilots #12 from Image Comics!

HUNT FOR A MISSING GHOST

As Home Sick Pilots #12 opens, the Old James House and the Nuclear Bastard continue their fight. Their battle is on TV around the world. It drags on for days. The Army, realizing how ineffectual they were, has given up attacking them. For what it is worth, the two girls are trying to keep their fight away from civilians as much as possible. They may have the spotlight, but we know that the key to the battle is taking place somewhere else.

The scene shifts to the place where the toilet might be, trapped in some sort of containment device. It still has a guard, a guard as abandoned as the town and likely not alive anymore, or at least not naturally alive. He had his orders from a man with a little dog, and he is staying here until he is relieved of duty.

Rip sees that the area beneath this town bears a striking resemblance to the nuclear testing site where he was with Meg. The tunnels go on and on, and Rip and Buzz become separated. Buzz is with the Old James ghost and wonders whether this is also some kind of test site, then insists that the ghost tell him. Instead, it shows him. We get a flashback to 1941 at a military site. They have a ghost at one of their complexes who is confusing the layout of the tunnels and overwhelming people with black mold, or at least the belief that they are being covered in black mold. The experiments Meg was part of had an origin here in this place. There is a scientist there who has learned that the horseshoe can create a sort of ectoplasmic armor, which we have seen on Buzz. The military man in charge of the place has a small dog. But the ghosts cannot be controlled, and nuclear fission seems to be more popular. The ghost project is being shut down and sealed off, leaving only a guard behind.

Except that the horseshoe, who was one of the two ghosts they had, managed to sneak itself out in the scientist’s pocket. I love this twist, that the possible militarization of ghosts had its origin back further than we originally thought.

But what about Rip? Alone in the tunnels, he starts feeling as though the black mold is getting into his lungs, and he cannot help but think about the worst things that have happened to him. Then he sees General Rzor, who dies at the Test Site, but who was the grandson of the commander of the 1941 project, and who is still influenced by the ghost of his grandfather, who still feels guilty about the man he left behind. I love how this ties everything together.

Home Sick Pilots #12 continues the interesting use of color in the art. From the moment Rip and Buzz set foot in the abandoned town, the color seems to be full of melancholy. It is heavy in the blue to purple part of the spectrum. The closest the palette gets to red is magenta which provides both highlights and contrast but doesn’t go against the mood. And then, as Rip explores, he heads for the bright light in the tunnels, as if that isn’t suggestive of death.

The flashback explores more with color. It isn’t exactly monotone, but the base color is a grayish-green. Not only does this give the panels a look that is reminiscent of black and white photos, but the green is a nod to the color of army uniforms. The linework is more sketch-like and there is even a touch of Zipatone effect used in the color. I love how all of this helps reinforce the fact that this is taking place further in the past.

Home Sick Pilots #12 takes an already fascinating take on ghosts and solidly ties it in with commentary about harnessing incredibly dangerous power for military reasons and the consequences thereof. But we care because, with the ghosts, everything ties back to individual people. It’s a brilliant use of the concept.

The Old James House ghost has more secrets to reveal, and a complicated past.