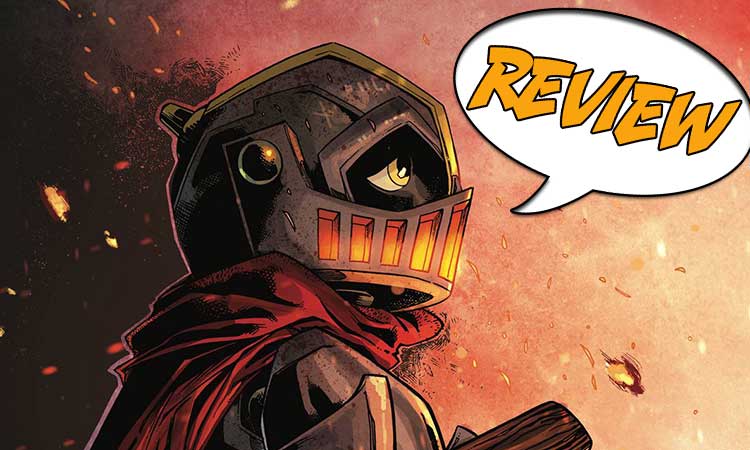 Canto gives the Red Fury the unexpected treasure of her memories. Is her help enough to turn the tide, or are the Shrouded Man’s armies inexorable? Find out in Canto III: Lionhearted #6 from IDW Publishing!

Previously in Canto III: Lionhearted: Canto and Aulaura travel to the Frysta Wastes to speak with the Vikus. As Canto makes his case to them, the Furies arrive with an army. The Vikus agree to fight and engage the army, but it soon becomes apparent that someone must fight the Furies directly. Rune and Aulaura join Canto to take them on, but their weapons have little to no effect, and the Furies take them into the air and drop them. The Red Fury grabs Canto and demands he give up the Shrouded Man’s heart. Instead, he has her touch it and learn about her past. She and her sisters gave their own lives and memories in trade to a sorcerer so their father would be spared from losing his own memories.

SACRIFICING ALL FOR LOVE

Canto III: Lionhearted #6 opens as Aulaura and Rune are falling into the chasm. The Red Fury, now that she remembers her past, flies down to save them. Then her sisters fight her, and she has no choice but to strike them down into the chasm. She returns and lands in the snow near Canto, losing her guise as a Fury and appearing as a human woman, injured and at the brink of death. She asks if Canto believes that, in the end, her father remembered his daughters. Canto says he does.

She passes and they build a pyre for her. Canto recalls how they could not understand how he would risk everything for someone he loved, even though they had once all done the same. I like the parallels this story presents with characters, as though it is a way for us to see how things can turn out differently depending on the actions they take. And as Canto muses on this, we see that he told the Fury what she wanted to hear, but he prefers to believe that her father did not dwell on their disappearance, but rather treasured the memories he had of them. This is a profound observation.

A magical flame appears and within it, the Shrouded Man. He knows what has happened in the Frysta Wastes. But he has captured Canto’s friends, and he is sending his armies to attack Canto’s people. Canto has a choice – deliver the heart to save his friends but lose his people, or save his people and lose his friends.

Rune steps up. He will gather the Vikus and save Canto’s people so Canto can save his friends. Aulaura agrees to meet Rune at New Arcana. As Canto makes his way back, the Shrouded Man can feel that an end is coming, as in an end to the world. But is he seeing an upcoming ending, or has his rule been an end to the world already?

THE PAIN OF MEMORY

The opening segment of Canto III: Lionhearted #6, as the Red Fury saves Rune and Aulaura, is powerful and dramatic. While the Fury’s helmet covers her eyes and much of her face, we immediately see a new sort of determination in her. She carries this force of will into battle against her sisters. Her story is a grand tragedy, especially since she must kill her sisters who were once so beloved. We get to see her briefly when she becomes human, injured and weary, but still clothed in red, a red that matches Canto’s cape. I like to think that it symbolizes the deep love both of them were willing to sacrifice for.

This is the end of an arc, and I like the way it concludes. In addition to setting up for the final confrontation between Canto and the Shrouded Man, we see a montage of scenes from the various areas under the Shrouded Man’s control. It reminds us of tales we have seen in the past, such as the adventure in the city of the Giants and shows us again how broad a swath of control the Shrouded Man has exerted. He may be the knight who failed in his quest, but it looks like he lashed out in anger against the entire world.

Canto III: Lionhearted #6 is a melancholy end to a story arc, yet still there is hope. It is always disquieting when the hero has a difficult choice to make. The upcoming stakes are huge, but perhaps the allies Canto has made will help him turn the tide.

Canto fights the Fury’s army in the Frysta Wastes, but what else has the Shrouded Man planned?