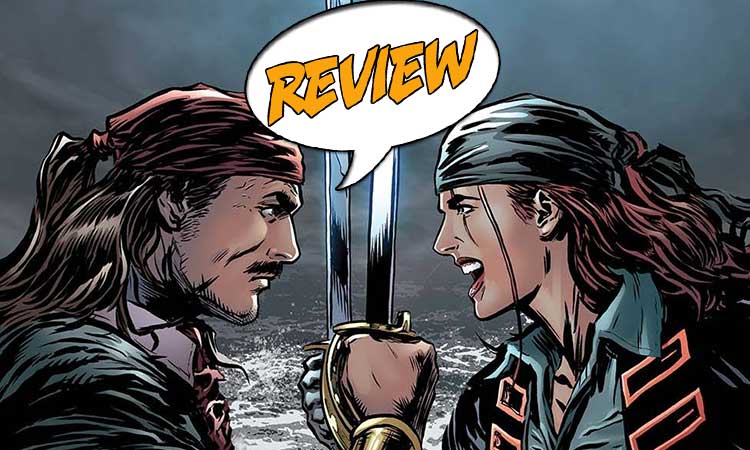 A Man Among Ye #8 Review

And it all comes down to this:  Jack has agreed to kill Anne, and Anne wants to kill Jack. How will their tale of piracy and love end? Find out in A Man Among Ye #8 from Image Comics!

Previously in A Man Among Ye: Amira frees Anne and her crew from jail and leads them into the smugglers’ tunnels below town. A bounty hunter follows them and catches up. He doesn’t care about the rest of them – all he wants is Anne! Amira kills him. Jack reminisces about when he asked Anne to run away with him, even as he knows his shipmates want her dead. Amira gets the women down to the shore where they have one final skirmish with the local soldiers before boarding their ship and making their escape!

As A Man Among Ye #8 opens, Anne is ill and sleeping restlessly. Mary worries that she pushed her too hard when she was plainly sick, but they were all mad at her at the time as well. Iris promises to keep an eye on her when Anne awakens and drops the bombshell that she is pregnant.

Under cover of night, Jack rows ashore to some caves with Ellis. Ellis questions him about the deal he made. Agreeing to take Anne’s life in exchange for some land and a new life doesn’t seem like the Jack he knows. At this point, Jack says that he intends to duel Anne. Ellis is rightfully concerned. What if Anne wins? But Jack recalls a pirate king, Hornigold, who gave away his entire treasure to Woodes Rogers in exchange for a land and pardon. Jack thinks Anne believes in pirating even more than he does, and he’s willing to risk his life if it means she will survive and thrive as a pirate.

Anne, pregnant and on board a ship, does not feel so well. The solicitous Mary thinks she should see a doctor, which almost lost me; at that time, she would have seen a midwife. At any rate, Anne won’t stop for that. She believes Amira is leading them not to some treasure, but into the hands of Jack Rackham, and Anne wants to kill him.

In short order, Anne and her crew meet up with Jack and Ellis. Jack proposes the duel and Anne accepts. They fight and it comes out the Jack is upset that she did not accept her place even with him. She trips and falls. As he is about to kill her, she admits she is pregnant with his child. As he pauses in surprise, Amira kills him, which sets up a fight against Amira. After she is dispatched, we get a brief epilogue and ending.

This was a pretty good pirate story, but this final issue suffered a bit from the contrived feeling of the set up for the final battle, and how flat some of the other characters have become. Amira comes across as a sort of deus ex machina, especially when she kills Jack, since I never got a sense that she was ever all that invested in him. Iris has a few lines, but never had a full character arc, which is a shame because she has such an interesting back story. Jane had her spotlight a couple issues ago, so here she is essentially part of the background scenery. While the story has an ending that works, I was left with the uncomfortable feeling that I was missing something.

A TASTE OF SWASHBUCKLING

I cannot complain about the artwork in A Man Among Ye #8. I love the idea of the pirate caves as a setting for the big fight, and the fight itself is exceptionally well drawn. It feels like a classic pirate sword fight from the movies. This may mean it is more dramatic than a real duel would be, but it allows for some lovely panels and composition. The action and effort come across well, and we get a sense that the fight moves. If there is any confusion, it is whether it takes place inside the caves, or on a sheltered beach, which is a small complaint. Rocks, water, and sand are a terrific setting for the battle.

Mary actually gets a small conclusion to her arc. She looks much more womanly at this point. I didn’t realize that much time had passed, since she was barely more than a girl when we first met her. But she finally must take someone’s life and it affect her. She has some true affection for her compatriots, but maybe after all is said and done, she was not really cut out for a life of piracy.

BOTTOM LINE: THE END OF AN ERA

A Man Among Ye #8 closes off this tale of Anne Bonny and her female crew. I enjoyed reading a book about women as pirates, especially as the story does give some nods to the difficulties of being women who don’t fit into their expected molds.

Anne Bonny’s tale marks the ending of the age of pirates.