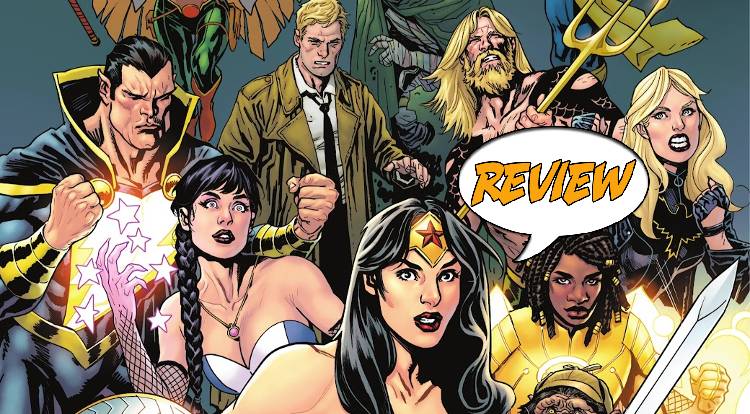 It’s a threat so dangerous that it will take two Leagues to address it! Your Major Spoilers review of Justice League #72 from DC Comics awaits!

Previously in Justice League: Black Adam has been serving with the Justice League for some time now, but he’s still an unknown quantity, a scorpion in their midst. Ill omens and portents of doom have been appearing to the members of Justice League Dark, but what do they have to do with the magical antihero?

A VISION OF CATACLYSM

Justice League #72 opens in the chaos of battle, as Zatanna stares at her blood-covered hands while someone (Madame Xanadu? Wonder Woman? It’s impossible to tell) screams that she’s a traitor. Smash-cut to the Hall of Justice, where Zatanna tries to come to grips with her vision as Etrigan and Constantine bicker back and forth. The Justice League team is in the field for a charity event, allowing Naomi to talk about how she enjoys the parts of the job that aren’t about punching while Aquaman entertains a group of children with tales of derring-do. They return to the Hall of Justice just in time for the Justice League Dark team to rush in trying to find Black Adam, but he has returned to Kahndaq where a strange visitor waits for him… a Lord of Chaos called Xanadoth!

I’d just like to say that I’m bothered that a book featuring “Madame Xanadu” is debuting “Lord Xanadoth.” That just feels ill-thought-out.

This comic book made me extremely frustrated, as the first THIRD of the book consists of a series of stepladder Bendis conversations, as Zatanna tells Constantine about her vision, then Doctor Fate tells Zatanna about HIS vision, followed by a phone call from Madame Xanadu explaining HER vision. Page after page is dedicated to these conversations, followed almost immediately by Xanadoth and Black Adam having a back-and-forth conversation that feels incredibly casual and full of modern slang and terminology. (The ancient Lord of Chaos says “So here’s the deal…” and puts forth her proposal, causing the centuries-old survivor of ancient Egypt to say “Don’t so a whole thing.”) The story also features multiple art teams, which theoretically should serve to keep the JL and JLD portions of the story distinct, but the bland, repetitious dialogue shoots down that particular hope. By the time we get the end of the issue, where the highly predictable moment presaged by the endless vision actually HAPPENS, I was surprised to find myself at the end of the issue!

BOTTOM LINE: A WHOLE LOT OF NOTHING

Kudranski and Luppachino are both talented artists, but their styles are incredibly poorly matched, pressing the shadows and sharp edges of the Justice League Dark story against bright colors and smooth lines of the Justice League’s portion of the story, making for a confusing jumble of a book. Adding to that, Justice League #72 features glacial pacing that seems to want to evoke movie dialogue but just feels like a crowd of Bendises talking to one another and a tiny sliver of story that feels like it’s barely a prologue stretched thin over 20 pages, earning a disappointing 2 out of 5 stars overall. My biggest takeaway from this issue was a little bit of happiness at seeing Wally West once again acting as the League’s Flash, but even that feels fleeting in the service of an underpowered story.

This issue portends a new threat to the League, but ends up being nothing more than a series of escalating conversations with a cliffhanger ending that is somehow both predictable and out of left field. This could easily have been the first third of a more complete issue.