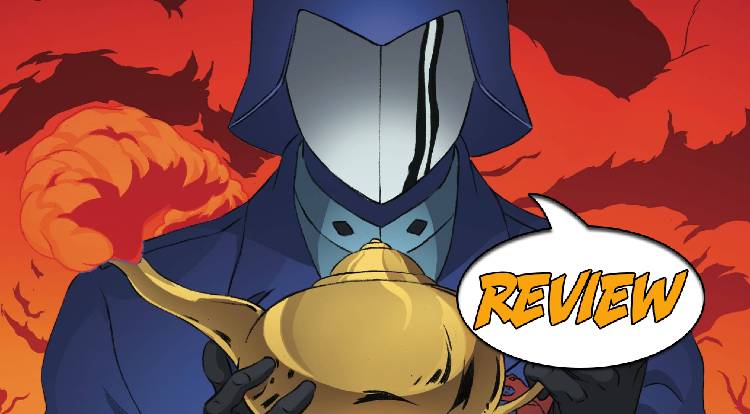 Previously in G.I. Joe: A Real American Hero – Saturday Morning Adventures: G.I. Joe is the codename for America’s daring, highly trained, special mission force. Its purpose: To defend human freedom against Cobra, a ruthless terrorist organization determined to rule the world… Well, you know the story! But now, Cobra might have found their most versatile weapon yet! Can even G.I. Joe stop the Aladdin Initiative?

Fade In: The Cobra Terrordrome, somewhere in the Pacific Ocean. Cobra Commander has managed to gather the most important bit of treasure that the Dreadnoks have ever brought him: The Lamp of Aladdin! Even Destro is amazed as he rubs the mystical artifact and the genie appears, but the Commander is disappointed when the Genie tells him that he can’t have “ultimate power” to destroy his enemies. The Commander has a second idea though: GIANT ANDROID BATTLE TROOPERS! The first of his new army of one-hundred-foot-tall foot soldiers is dispatched to destroy G.I. Joe headquarters but falls prey to a little bit of teamwork and some initiative by the team’s senior pilot, Ace. Fortunately, it’s a cartoon, so he bails out safely, but his assault also allows Destro to upgrade the remaining Battle Android Troopers with force-field emitters, dispatching them around the world to wreak havoc and bring Cobra their inevitable victory.

The real gem in this issue is the one-page Something To Know segment, wherein Mainframe warns a kid about the dangers of being an internet troll about comics he doesn’t like, teaching him about how knowing is half the battle, but being a douche is forever. The story in these pages is a clever enough one, reminding me of the old days of Flint Dille tales after school, spicing things up with just enough nonsense to remind me that those cartoons were a little less transcendent than I might remember. They also give Cobra Commander’s genie the exact limitations of Disney’s cartoon version, with Delgado’s art approximating the Sunbow house style’s take on that character. The art is pretty phenomenal in its attention to detail and the cartoon models, with the real genius moments coming from colorist Neil Uyetake. His work in this issue perfectly evokes the ghosts of cartoons past, making each panel stand out, and bringing life to the stiffer figure work necessary to feel like an ’80s cartoon.

All in all, G.I. Joe: A Real American Hero – Saturday Morning Adventures #1 is kind of (you should excuse the expression) a marvel, using the most modern printing techniques to emulate the cheapest animation that 1986 had to offer, giving us a fun, goofy story that’s somehow just as true to G.I. Joe as any grimdark wat story, with excellent coloring bringing it over the top for 3.5 out of 5 stars overall. My quiet enjoyment of seeing Alpine, Sci-Fi, ponytail Scarlett, and Duke again makes this issue a fun one for me, but I think that younger readers who have a taste for old-school cartoon whimsy and weirdness will enjoy this as well.

The use of the animation models and flatted animation-style coloring make this one feel like a good memory for readers of a certain age, but it also works as a straightforward comic adventure.