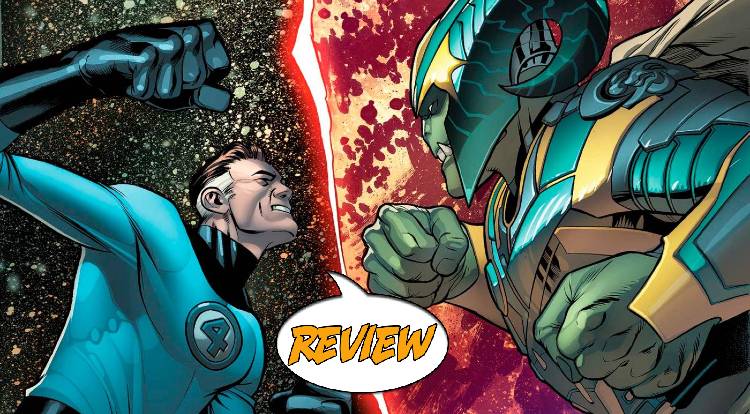 The Reckoning War rages and the Fantastic Four is preparing for the battlefield! Your Major Spoilers review of Fantastic Four #40 from Marvel Comics awaits!

Previously in Fantastic Four: The opening shot of the Reckoning War has left the Earth in complete and utter chaos. And it turns out that we are not alone. The entire universe is on fire. The enemy has had eons to prepare for this attack. Reed Richards has had two hours to mount a defense. Johnny Storm has gone full supernova. Sue Storm has become completely invisible… even the Watchers can’t see her.

And Colonel Ben Grimm, for the first time in a long time, is ready to go to war!

A QUADRILLION CRISES ALL AT ONCE

As the alien Badoon invade New York City, the Fantastic Four return home from Earth’s Moon, in the company of Colonel Nick Fury, until recently known as The Unknown. Fury has given up the power of the Watcher, transferring it to Mister Fantastic, whose mental facilities are expanded exponentially. The universe is overwhelmed with crises (which Reed refers to as “an endless series of events” in a very amusing meta statement) but only he can see which ones are real and which are smokescreens. When The Human Torch sees that his lady-love Sky’s home is under siege, he takes off in a rage, his newly empowered supernova-level powers taking him into space. It’s the kind of thing no one could see coming, except… Reed already did. He welcomes Jack Of Hearts and She-Hulk into the Fantastic Four, and sets off for a battlefield of his own, one against a pair of cosmic villains who have wiped out the Imperial Guard. Worse still, one of them is Rapture, the woman that Ben Grimm saw in a vision… A vision from The Griever of his own future death.

That’s not even mentioning what’s going on with the Watchers, an assault on the corpse of Galactus, the resurrection of Earth’s Watcher, Sue Storm’s disappearance, the return of Annihilus. Those who have been paying attention know that Slott has been seeding the ideas for this story for more than a decade-and-a-half, using story points from his run on She-Hulk, the Initiative storyline and even Stan and Steve’s origin of the Watchers from 1964. It’s a heavy load to lift, but the script manages to keep it all in focus while keeping Marvel’s first family squarely at the center of the drama. Reed’s new perspective seems to have stripped away his humanity, but Sue realizes that it’s all a front to cover how terrified he is. As for The Thing, his uncharacteristic terror at seeing the place and manner of his doom is really powerful, especially the visuals. Stott’s art is beautiful throughout this issue, showing moments that I never expected to see in an FF comic, like Vance Astrovik wielding Captain America’s shield against the Badoon or Alicia Masters recognizing Nick Fury from previous encounters.

In short, Fantastic Four #40 is another strong opening for a big cosmic crossover, overcoming my instinctive fear of how the previous dozen or so ended, with really strong plotting and nuanced art making every page worth studying carefully, earning 4.5 out of 5 stars overall. With all the seeds planted, going back so far, The Reckoning War feels somewhat more substantial than some other big event books, and I’m hoping they can carry that forth throughout the whole story.

The Slott/Stott/Aburtov/Caramagna team is a foursome as impressive as the main characters, each of whom gets something unexpected and entertaining to do, while players as varied as Moon Knight and the Silver Surfer move about the metaphorical chessboard, making for one impressive story.