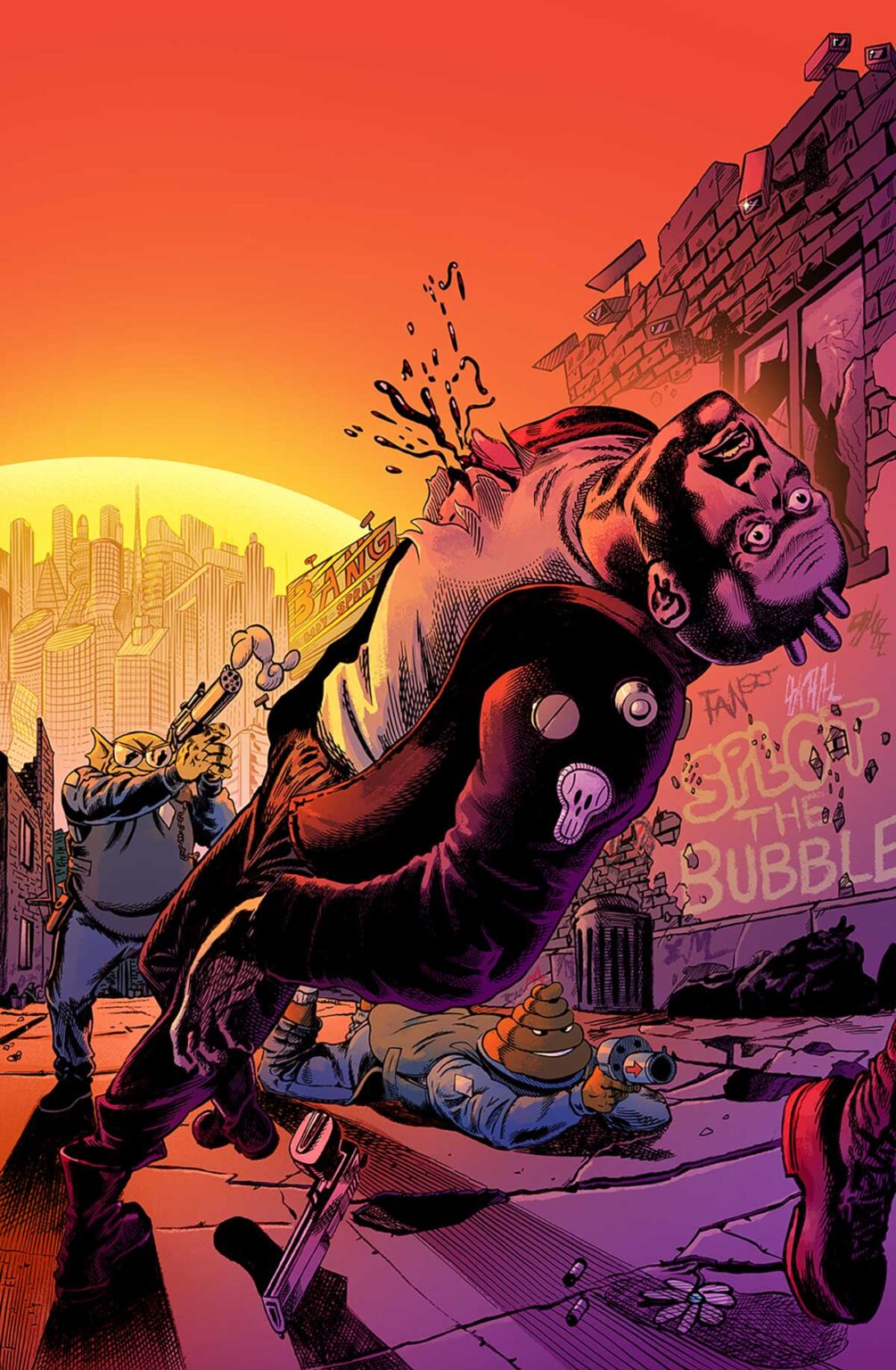 Matt Bors — the founder of The Nib and a political cartoonist who has twice been named a Pulitzer Prize finalist — and Ben Clarkson — an acclaimed filmmaker and illustrator whose art has been featured on Adult Swim and Vice Noisey — are collaborating on all-new comic book series, titled JUSTICE WARRIORS. The series marks Bors’ first ever monthly comic book, and follows his announcement last year that he was retiring from political cartooning, following 18 years and 1,600 comics. The series also marks the first ever comic book work done by Clarkson. The irreverent, dark comedy six-issue series will be published by AHOY Comics, beginning this June. JUSTICE WARRIORS follows two police officers, Swamp Cop and Schitt, stationed in the world’s first perfect city. A bustling metropolis flourishes inside the protective shell of Bubble City. It is a city of equality, diversity, and prosperity with no crime whatsoever. But outside of the Bubble lies the Uninhabited Zone, a densely populated and vast slum where the majority of the mutant population actually lives.

In the series, the veteran Swamp Cop is paired with a rookie partner, Schitt, after Swamp’s partner is killed in the line of duty (when he was run over by a self-driving city bus). The increasingly cynical Swamp Cop becomes obsessed with arresting or killing the bus, as he begins to suffer PTSD. Haunted by hallucinations of his dead partner, Swamp Cop is determined to show the naive rookie Schitt that you can only police the UZ by bending every rule that’s left.

Each issue, Swamp and Schitt must contend with new forms of crime as the Bubble’s boom-and-bust economy creates waves of market panic, bailouts, and austerity. Amid the instability, a new cyberpunk gang rises to prominence using social media, good vibes, and anti-Bubble sentiment to wage war on the Prince, the mayor who is also a pop star. “JUSTICE WARRIORS is a mega-satire of the system we’re stuck kicking at the walls of,” said Clarkson. “Imagine, if you will, a mash-up of The Wire, Robocop, and The Simpsons’ ‘The Itchy and Scratchy Show.’ This is a comic where the weatherman reports on the day’s riot trajectory, the mayor uses a scheming cyborg rat advisor to juice his record sales, and the police chief is too busy posting memes to post the murder rate.”

JUSTICE WARRIORS is co-written by Clarkson and Bors in a collaborative art process involving both creators contributing to various stages of layouts, with colors by Felipe Sobreiro. All line art is by Clarkson and it is lettered by Bors.

“You could say that JUSTICE WARRIORS is the buddy-cop parody we all need right now,” said Bors. “It’s a violent satire of police, inequality, and celebrity, but mostly, it’s about why nothing changes and how almost no one is a good guy.”

“The motto of AHOY Comics is expect more,” said Tom Peyer. “Each AHOY Comic comes with extra content: short stories, poetry, crossword puzzles, and cocktail recipes. And every issue of JUSTICE WARRIORS will be jam-packed with bonus material, including a monthly, standalone one page strip by Matt Bors exploring the life of mutants in the UZ, and a standalone, one-page mugshot and criminal history of a perp (or victim) arrested (or killed) in each issue, which will also be Illustrated by Bors. There are some other secret things I don’t want to spoil, because some things, like the self-driving city bus, should just be experienced.”

JUSTICE WARRIORS will be published monthly by AHOY Comics, beginning on June 8, 2022.