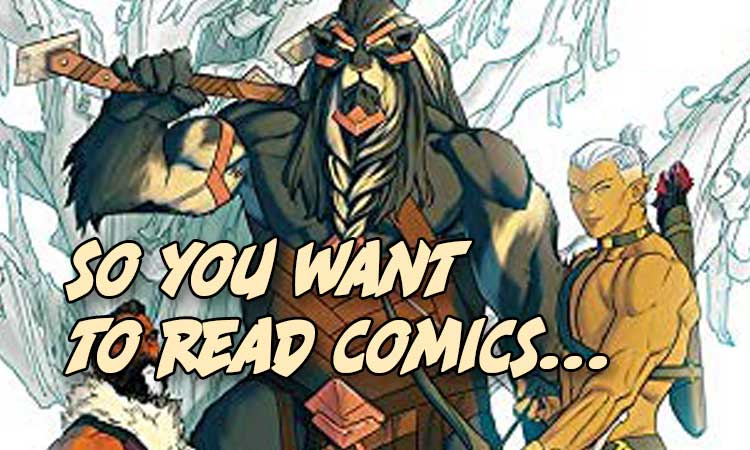 So You Want To Read Comics – High Fantasy Edition

It’s getting a bit epic here with this week’s “So You Want To Read Comics”.  This is our weekly feature where we take a look at a single topic or genre and then offer up a pair of comic book recommendations, perfect for new readers, based on that item.  This week we’re taking a look at the world of High Fantasy.

Like any good subgenre, high fantasy is full of claims about what exactly makes it what it is.  There are some that claim that something that is high fantasy should have a large page count and span a long period of time within the narrative.  Others believe that high fantasy is best defined by medieval stylings with magical elements added in.  For the purposes of this article though we’re going to look at high fantasy as something that has magical and supernatural elements and also takes place in a setting that is not some variation of our own world. Some of the great tentpoles of fantasy come from this subgenre, with names like Tolkien, Jordan, and Martin having penned tales within it.  It’s here we find the classic imagery of solitary heroes facing off against gargantuan monsters, wizards weaving mind-bending spells, and epic tales full of lore and characters.  But also some surprising entries such as Star Wars can be classified as this if you want.

Now, to be honest, there’s no shortage of comics that fall into the high fantasy sub-genre. If you have a favorite book or movie in this genre, there’s probably a comic book adaptation.  So for the recommendations, we’re going to try and dive a bit deeper to find some hidden gems.

Here we have a somewhat smaller take on the high fantasy genre.  While you still get all the familiar things like large imposing creatures, and a world forged in part with mystical elements, at the heart of this is a tale of someone having to confront their mistakes and decide their true path in life.  The Stone King tells the story of a young thief named Ave, who wants nothing more than to see the world and have an adventure.  But, when she bites off more than she can chew, they have to figure out how to set things right before everything they’ve known is destroyed for good.  It’s stories like this that show the real versatility that high fantasy can have but is often overlooked.  Not that there’s anything wrong with a big scope, it’s just that when a story can tell a personal tale in a grandiose way, that’s when you know you have something special.  As a bonus, this series has been released in its entirety and is contained in just one volume.

We’re keeping on the small side here, but this time that’s only in reference to the length.  The White Trees was a two-issue story about a trio of adventurers pulled out of retirement to perform one final job for their king.  While it’s only two issues, those pages are packed to the brim with action, fighting, magic, sex, and fantastic creatures.  On top of all that is a heartfelt story about what it means to be a father and how a thin line has to be walked between allowing your children the chance to define their own lives and protecting them from the actions and mistakes, you made in past lives.  All this with a political intrigue story happening in the background. As a bit of a warning though, there is plenty of adult content in this series so keep that in mind when you dive in.

So what are some of your favorite high fantasy stories?  What do you think of these recommendations? Let us know in the comments section below.