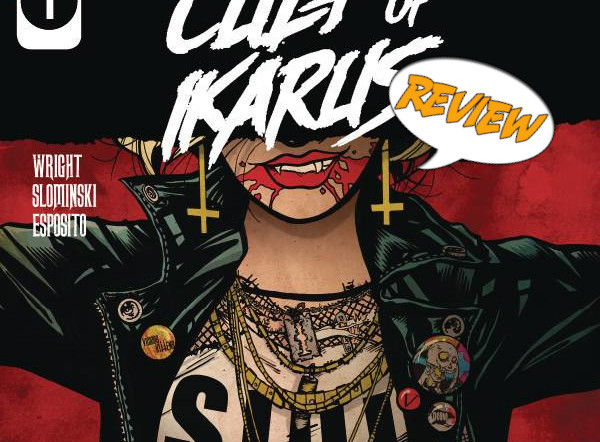 Hunter is on a mission to figure out who her parents are. Unfortunately, she found herself on a path with bloodthirsty vampires! Find out if she survives in Cult of Ikarus #1 by Scout Comics! Previously in Cult of Ikarus: Check out the new miniseries from Scout Comics! Hunter has been in foster care and has had trouble keeping a foster family. Now she has a lead to who her parents are, and maybe she will get the answers about her mysterious past.

DON’T PISS OFF A VAMPIRE

Cult of Ikarus #1 starts off with a reoccurring dream. Hunter has a nightmare about the death of her parents. In the real world, Hunter is trying to get information on a book she has and meets with a bookkeeper who knows her name. The bookkeeper invites her to a bar, where the legendary Gracie Rage plays. Hunter learns about her parents from the bookkeeper and that he was the one who put Hunter in the foster care system. This causes Hunter to run off angry to the bathroom.

Unfortunately, her outburst caught some people’s attention, and she was ambushed in the bathroom by what appeared to be vampires. She kills two of her assailants before running out of the bar with the bookkeeper. But vampires are still hot on their trail. The bookkeeper fights the vampires while Hunter runs away. Luckily, Gracie Rage comes in to save her and reveals these vampires to be the Cult of Ikarus!

The thing that caught my attention in Cult of Ikarus #1 was the art style. It has almost a Noir style but is accented with different colors. Each page caught my attention, and my eye gravitated to the actions on the page. This helps because the plot seems straightforward so far. There isn’t much in the plot or dialogue that catches my attention. Hunter seems like a plain orphan protagonist, and we don’t know much yet about the Cult of Ikarus to see if they will be engaging. I fear that we will get another vampire slayer storyline that doesn’t offer anything new. Still, it is way too early to tell at this moment. I could be wrong, and there could be many details in future issues that add uniqueness to the story.

Cult of Ikarus feels like a pretty standard vampire hunter storyline. If you enjoy those tropes and the supernatural genre, then go ahead and pick this up to read. Otherwise, I’d wait for the trade before purchasing this series. 4 out of 5 stars for Cult of Ikarus #1 by Scout Comics.

Cult of Ikarus #1 tells another vampire slayer story with an engaging and intense art style.