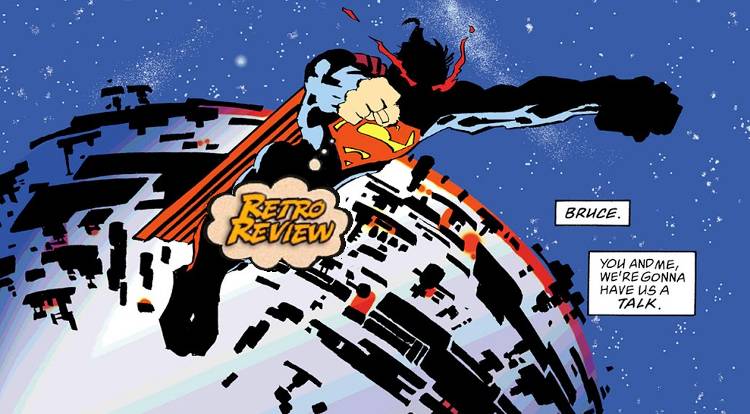 Turns out that The Batman’s final adventure wasn’t so final after all… Your Major Spoilers Retro Review of The Dark Knight Strikes Again #1 awaits!

Previously in The Dark Knight Strikes Again: After retiring from the vigilante business, Bruce Wayne became a recluse, living in the wreck of his family manor after the loss of Robin. After ten years, though, Gotham City had devolved into an even deeper cesspool of crime and nonsense, leading him to return to the streets. A fifty-five-year-old Batman isn’t quite the same as a youthful one, however, leading him to resort to previously unthinkable means (such as big ol’ guns) to bring the new criminals to heel, attracting the attention of Superman and staging his final gambit. After facing the Man of Steel, Batman died in the gutters of Crime Alley…

…at least, according to the official record. We open with the State of the Union address, during which President Rickard announces his latest programs, while Jimmy Olsen watches and remarks in horror. Each new insult leads Jimmy to protest louder, while his co-host cautions him to watch out, for the sponsor’s sake, ending with Jimmy literally looking into the camera (and thus, directly into the readers’ eyes) and crying out “Where are our HEROES?”

The story then sets out to answer his query. After a harrowing sequence where a nude man is trapped in a strange wilderness, forced to fight monster after monster, he raises his hand to catch a familiar red belt switch. Growing to colossal size, he steps out of the “ocean” to discover he’s been living in a petri dish. Carrie Kelly greets him as “Professor Palmer,” but before they can do much more than that, the security alarms go off, triggering a huge fight between Carrie/Catgirl and armored security forces, with The Atom in her mouth. Escaping, she accidentally swallows him but manages to vomit him up before setting off to their next destination. More news bytes pop up, including several naked and semi-naked women for some reason, while Jimmy attacks the President, revealing him to be a computer image. Fortunately, there’s someone who believes in his mad conspiracy rants. As for Catgirl, she’s ready to lead a group of Batboys (ostensibly the former Mutants that Batman took under his wing at the end of the previous series) into action to find another one of the heroes that Jimmy is wishing so hard for. Much like The Atom, his prison is an unusual one: A dynamo that powers a large portion of the future United States. As much of the country goes dark, it becomes impossible for the powers that be to ignore what’s happening. Superman, for his part, calls for help from Wonder Woman, who meets him and Captain Marvel at the Justice League’s former headquarters, where we find out who’s REALLY calling the shots.

And he’s got Paradise Island and the Bottle City of Kandor and Mary Marvel to keep the most powerful heroes in line, proving his villainous nature by executing an entire family from Kandor to show Superman how serious he is. A broken Man of Steel is dispatched to the Batcave, but the combined assault of Flash, Atom, Green Arrow’s Kryptonite arrows, and a lot of explosives knocks Superman down. That’s when Batman makes himself seen for the first time, with hew new Kryptonite knuckles. What follows is an unnecessarily brutal beatdown that makes the battle from The Dark Knight Returns look even-handed, leaving Superman a bloody mess, as Batman snarls, “I’m through talking. Get out of my cave.” It’s an echo of the last pages of the original Batman: The Dark Knight Returns debut issue, but instead of making me feel exhilarated at seeing a hero return to action, I’m just disgusted. This book came out just before All-Star Batman and Robin debuted, and the one-two punch of these books so close together was my final realization that Frank Miller’s work was no longer for me. The Dark Knight Strikes Again #1 is the work of a creator who lacks restraint, a comic book of pure excess from the garish coloring to the intentionally stylized and blocky faux-digital art to the nonsensical belief that what a really good Batman story needed was more of the rest of the Justice League, and it almost defies the star rating for 0 out of 5 stars overall.

This book is part of the downward spiral that leads to the Islamophobic and visually brutal Holy Terror a few years later, which was the comic book I liked the least until I sat down with seventy-odd pages of this book. There are moments in TDKSA #1 that actually work, but each of them is balanced by an equally bad idea, such as Barry Allen’s short-sleeved costume with comically large sneakers or Green Arrow’s new robot arm. The work of Todd Klein is an important, successful part of the storytelling here, but the story being told is a parody of the kind of ridiculous sequel pitches you might hear on Saturday Night Live, and Miller’s intentionally ugly art is the visual equivalent of Brecht’s dialectical theatre. Like those works, it is designed to make us all look and see the terrible world around us reflected in the escapism of a superhero story, which ends up being as muddled and retrograde a combination as it sounds. As with any narrative, your mileage may vary, but there’s little of value here for me, as a reader, a reviewer, or as a comic historian, other than a cautionary tale of a creator who doesn’t realize that they have devolved into self-parody.

The sequel nobody needed, executed without subtlety or restraint, taking the best parts of the original and undermining them with hyperbolic plotting and some of the dumbest tough-guy dialogue I've ever read.