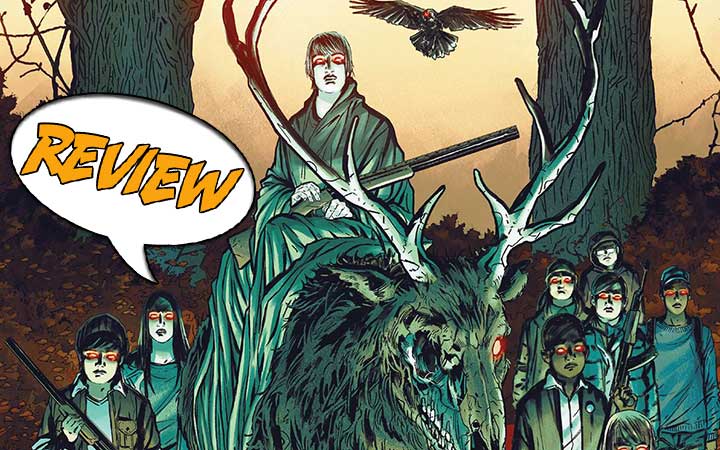 Daisy is compelling, but Lindsay doesn’t know if she should believe her. What could overcome her doubts? Find out in Daisy #3 from Dark Horse Comics!

Previously in Daisy: Lindsay’s search for her son Conor led her to the home of Mark Phillips and his daughter Daisy. The Sheriff who took her there shot her. She awakens in a cave, apparently unharmed, and when she walks out, Daisy is there, claiming she was resurrected. Lindsay insists that she has been abducted, and it is not until one of the kids mentions Conor that she pays attention. Daisy’s father believes he is an angel, and he has been abducting children. The town is complicit with his actions. Daisy believes he has lost his way. She sees a way to free the children but believes that Lindsay has been chosen to play a part in it. Back at the house, Mark finds what looks like a ritually-killed crow and immediately accuses Simon.

THE SINS OF THE FATHERS

Daisy #3 opens after Daisy has apparently set things into motion. Last issue, her father was killed by a flock of crows. Now, a herd of animals she raised from the deadly rampage through town. The Sheriff knows this is Daisy’s doing, and he knows something of her abilities. He also thinks of her as a pissed-off teenager and is looking for her father.

Seeing the destruction, Lindsay is appalled. She tells Daisy to stop this. Daisy counters by telling her that this is what the Creator has asked of them. In a brief theological debate, Lindsay asks her if she is sure that is who she is talking to. But in Daisy’s eyes, Lindsay’s resurrection is proof enough. They arrive at a church guarded by more children, all armed. In the churchyard, Daisy sends Lindsay down beneath a mausoleum.

Lindsay walks down alone and finds what looks like an investigation room. There’s a desk, and books, notes and pictures pinned to the walls, scraps of paper on the floor. One of the photos on the wall is of her and her husband and son. She turns around, and her son Conor is there, older now, and covered in tattoos in a strange language. After a hug, Lindsay tells him they’re leaving, and he tells her that they aren’t.

The story is complicated and relates back to the biblical story of the creation of the giants. Mark has been trying to translate the divine language of creation, believing that he can change the world. However, he also set himself up as the only person who could save everyone. Daisy had a vision, and she believes they are being misled. There is suffering, yes, but it is not because of a curse. Conor brings Lindsay to a different cavern where there are large numbers of children who are disfigured, malformed, or disabled. Lindsay’s reaction is the desire to help them as much as she can.

At the Phillips house, the Sheriff finds Mark’s body and is angered because they need him now, and it will take him time to recover, so apparently, he has magical abilities also. There are still some kids at the house and in anger, the Sheriff immediately threatens Simon at gunpoint. He seems terrified at the consequences the town will suffer when Mark returns. Simon tells him that Lindsay’s death was preordained and there’s a new plan. He insists he follows Mark and not Daisy.

Conor has prepared a ritual for his mother, reassuring her that Daisy was chosen for her purity of soul. Daisy enters the ritual chamber. Conor reads from a book with Daisy responding as she makes a final offering to the Lord as they repent and beg to be delivered from their afflictions.

PUTTING THE PLAN IN MOTION

The art of Daisy #3 is powerful and does not hold back from being graphic. We have the uncomfortable feeling that we are witnessing a cult, but it is hard as a reader to decide whether Daisy is a blessed alternative or another cult. The Sheriff is still covered in blood from killing Lindsay, but when we see the town, we see it overrun by a mix of wild and domesticated animals, all of which were raised from the dead. We suspect that Mark’s control over this town is unhealthy at best; we see that Daisy’s answer is destructive.

As soon as we see Conor, we realize two things. One of those is that he has absolutely been missing for years. The other, with his body covered with strange writing, is that the story is taking a distinctly mystical turn. Lindsay does come to trust him very quickly, but I really like that when she sees the children, she becomes committed. The children are depicted in a rather body-horror style, broad exaggerations of malformities, yet their humanity comes through, and we understand that they are merely children. It is strong symbolism for things that happen without being a person’s own fault.

Daisy #3 is a powerful story. The underlying origin of giants as being children of the union of angels and humans is echoed by Mark and Daisy. She is a relative giant – but does that make him an angel? And what does that really mean?

Lindsay is reunited with Conor, but her life takes an unexpected twist.