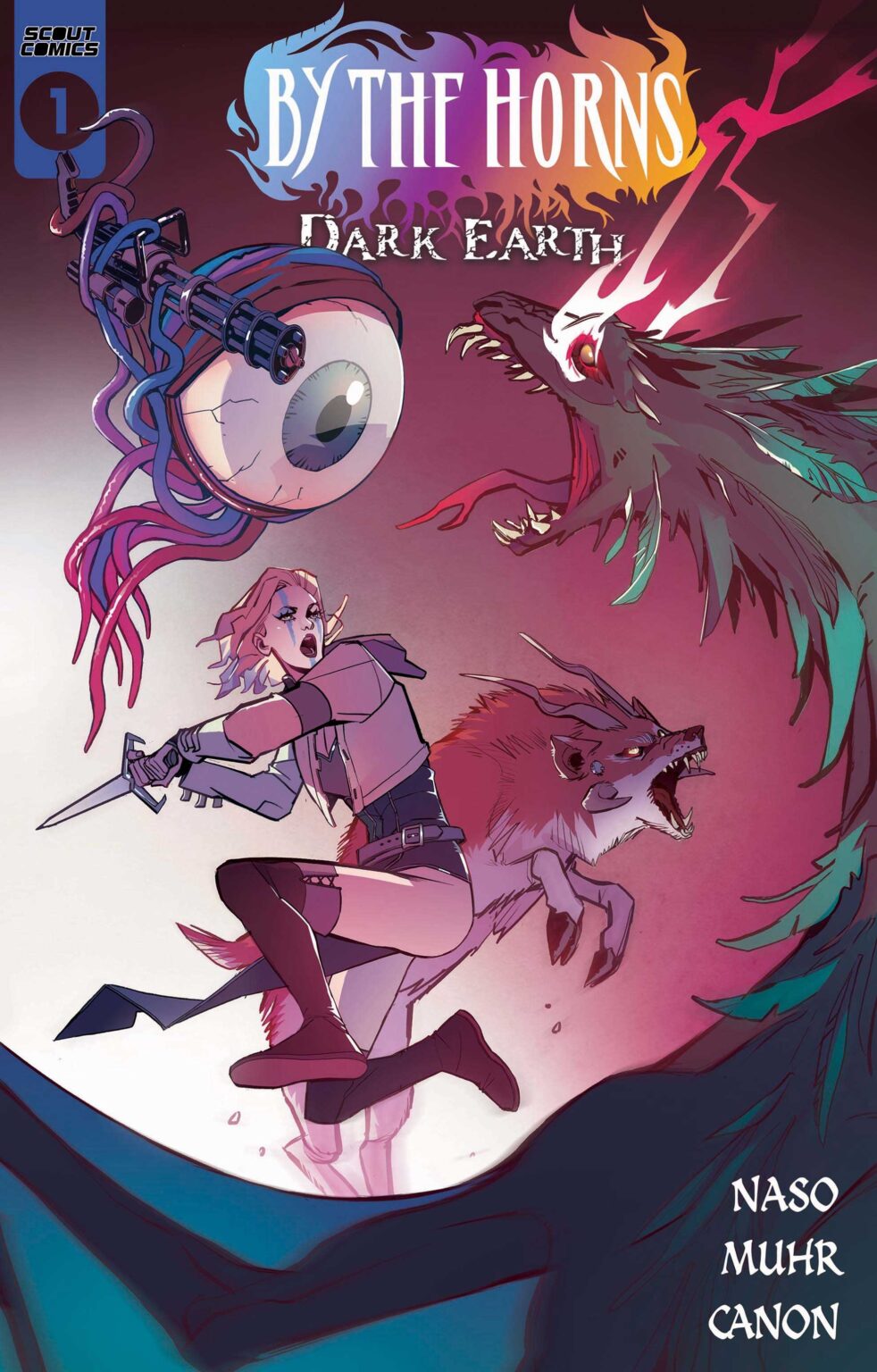 Scout Comics is proud to announce that BY THE HORNS will be back in comic book shops this April! The celebrated sci-fi, fantasy adventure series by co-creators Markisan Naso and Jason Muhr will return as a new maxi-series called BY THE HORNS: Dark Earth. “BY THE HORNS was one of our biggest hits in 2021,” said Scout Comics & Entertainment President James Haick. “We couldn’t be more excited that Markisan, Jason and the rest of the team decided to make this great series into an ongoing one. Be sure to grab the volume one trade (over 200 pages!) now before the new material comes in!”

BY THE HORNS: Dark Earth #1 begins six months after the explosive events of BY THE HORNS #8. Since their hellacious battle in the sky with the evil sorceress Feng Po, Elodie, Sajen and Evelyn have been reluctantly settling into their new lives as farmers in Wayfarer. But their days spent tilling the land in overalls proves short-lived when a mysterious blight devastates the continent of Solothus and forces them to take up a new quest.

BY THE HORNS writer Markisan Naso says Dark Earth builds off the subplots planted in the initial arc. “The first 8 issues of BY THE HORNS were really about Elodie learning how to forgive herself and the unicorns, and to make choices that help others instead of just herself. Dark Earth is about her dealing with the consequences of her actions at the end of arc one,” Naso said. “The continent of Solothus is suddenly thrown into chaos and many creatures blame her for it. So, the tables get turned. When we met Elodie she was trying to get revenge on the unicorns who trampled her husband. In arc two, she’s the one being targeted as she searches for a way to repair the escalating damage to her world. That responsibility is a big weight on her shoulders.”

BY THE HORNS: Dark Earth will also feature all new environments and fantasy creations under the digital pen of artist, Jason Muhr. “With our next volume of BY THE HORNS, I’m getting to design tons of new characters, creatures and settings, and I think readers are going to get even more of what they love about our book. I’m excited to bring all the new ideas we have to life!”

The new series also welcomes new colorist Steve Canon, whose past credits include Jack Irons: The Steel Cowboy and The Kill Journal.

BY THE HORNS: Dark Earth #1 will feature a main cover by Jason and Steve. A retailer threshold variant cover by White Ash and Glarien artist Romina Moranelli will also be available, along with a Scout Comics Website Exclusive cover to be revealed in March.