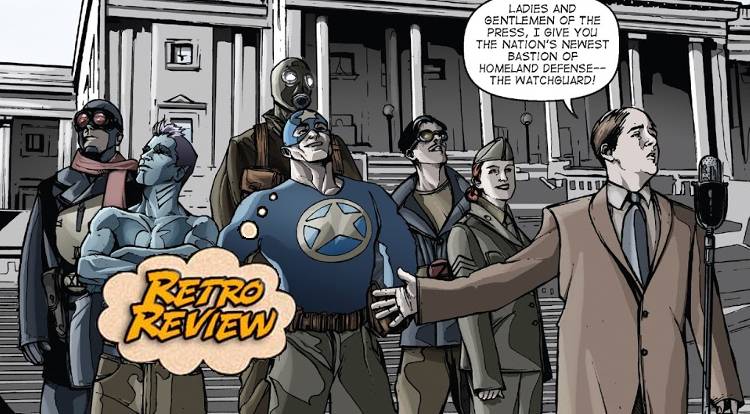 At the height of World War II, the United States decided that what they really needed was costumed heroes. But reality isn’t like the comic books… Your Major Spoilers Retro Review of Battle Hymn #1 awaits!

Previously in Battle Hymn: DATELINE: 1944! Dawn of the nuclear age! Super-powered beings are beginning to emerge from the shadows of conflict, beginning with the arrival of the Artificial Man. The United States government has a plan to turn these new arrivals into heroes. But someone forgot to tell the heroes the plan.

Our story begins off the California coast. Not only is there ONE super-powerful underwater dweller, but the war department is aware that there’s an entire race of them. For that reason, they’ve chosen to address the situation in an unorthodox way: By assembling a group of unusual individuals to deal with any such threats, starting with Europe’s star fighting attraction, the Proud American! The soldiers’ response to the masked adventurer really does hammer home how ridiculous the idea of a Sentinel of Liberty in the field of war really is, which is the kind of genre-breaking concept that could make reading this story intolerable (especially for an inveterate superhero fan like myself). I also love how Haun and Parks manage to make things realistic enough that you believe this is taking place in the real world while selling the existence of our man Proudie. Meanwhile, in Hollywood, the high-profile speedster Johnny Zip is in the middle of another public relations appearance when his call to action arrives. Unlike the Flashes, Whizzers, and Silver Streaks from which he is derived, Mr. Zip is arrogant, hedonistic, and self-serving, which should make him unlikeable. Instead, thanks to clever dialogue and some nicely handled back and forth, he ends up being my favorite of the assembled superhumans of the Watchguard. My second favorite member of the cast is busy in occupied France, The Midnight Hour’s tale of derring-do crossfades to him reporting to his superior, who wonders if it really happened, only to report to Prime Minister Churchill that, in truth, he just shot the spy through a window from across the street. Churchill gives him his new orders, after which we find young Betty Jablonski, whose connection to the mysterious submarine adventurer Quinn Rey earns her a spot on the squad, as their official “team secretary.” As for the last member of the team, that spot is held by a peculiar new form of life: A fully automatic nuclear-powered man! It doesn’t take a lot of imagination to see the parallels between these warriors and Marvel’s Invaders (a sentinel of liberty, an undersea warrior, an artificial man with energy abilities) or DC’s JSA (a dark avenger of night and a super-speed dynamo.) The introductions take up the bulk of the issue here, and while Battle Hymn #1 keeps bumping into moments that SHOULD repel me as a reader, they never actually do, thanks to some lovely art and a story that manages to avoid the pitfalls of modern story tropes, earning a well-deserved 4 out of 5 stars overall. When this book came out, I didn’t buy it specifically because I was worried that it would descend into dark parody, and I’m happy to say that, in retrospect, I was wrong.

It shouldn't be possible to combine Golden Age tropes with post-modern "realism", but this issue pulls it off with aplomb, setting the stage for an unexpectedly successful tale.