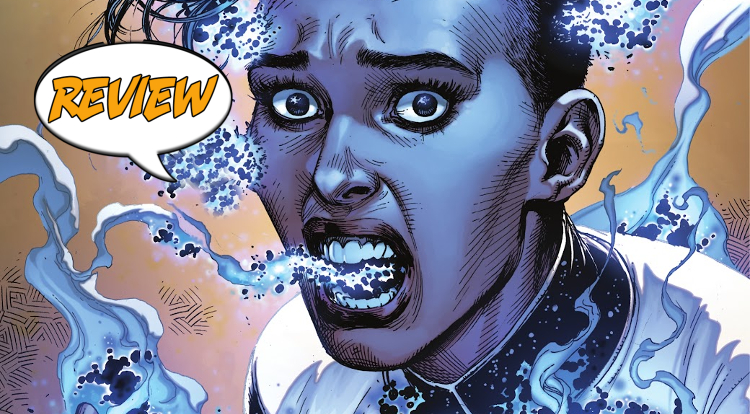 The end is near… but the beginning is not where you might think. Your Major Spoilers review of Justice League Incarnate #4 from DC Comics awaits!

IN THE SHADOWS OF THE CRISES

Justice League Incarnate #4 begins with one of the more interesting montages in recent comics memory, as we recount the original Crisis on Infinite Earths, including the moment wherein the mages of the universe helped to usher in a new world by bartering a truce between light and darkness. But that Great Darkness wasn’t stopped there, as the story shows us the original evil’s influence on Zero Hour, Infinite Crisis, 52, and other crossovers, tying it all together by positing that the Final Crisis led directly into Flashpoint, rebuilding the universe to weaken the superheroes of all the various Earths. That’s where the Justice League Incarnate comes in, as President Superman, Doctor Multiverse, Flashpoint Batman, Captain Carrot, and Flash Avery Ho realize that they’re the ones who weakened reality and allowed Darkseid to strand Barry Allen in a strange corner of the Multiverse. What’s worse, their editor’s insistence that Darkseid has to win (the previous issue was a real trip, and if you missed it, you might wanna go back) is now echoed by the multiverse itself, allowing the Lord of Apokalips to steal the power of Doctor Multiverse and rebuild all creation as nothingness.

Then, the REAL villain behind the scenes makes their plot known…

On the one hand, I like the use of the concepts and worlds of Multiversity in these pages. On the other, each returning world tends to get obliterated. Earth-7 and Earth-8 are both gone, the House of Heroes has been shattered and half their number absorbed by the darkness, It’s all very nihilistic stuff, and that’s saying something, given that the villain of that miniseries was, basically, the literal Man Behind The Curtain. It’s appealing on a number of levels (and I cheered out loud when a certain character was seemingly taken out in this issue), but seeing those cool concepts destroyed one at a time wasn’t what I had in mind. Williamson and Culver’s script is solid enough, but the multiple art teams do have an effect on continuity. The last issue used different artists to differentiate different Earths, but this one takes place on one world, which makes the tonal shifts less successful for me. The opening sequence also features Burnham replicated pages from Jimenez, Perez, Gary Frank, and other artists, which only shows off how different his art is from any of those creators.

When we break it all down, Justice League Incarnate #4 is my least favorite of the series so far, but it’s successful in welding together a number of existing story elements successfully and hitting a really big cliffhanger moment, with wobbly art transitions and the destructive nature of the story working against the narrative somewhat, earning 3 out of 5 stars overall. As someone who really wanted to see an Incarnate ongoing series, this is both refreshing and disturbing, but it all balances out to make a better-than-average comic book, in spite of my concerns.

Remixes many of the previous Crises into one ongoing storyline, but doesn't quite pull it off, and while I'm not that upset about the loss of a team member, I'm worried how this is all going to pan out.