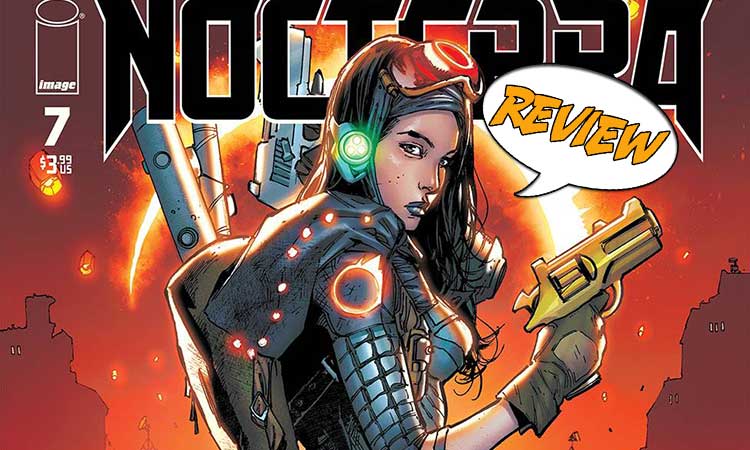 Val Riggs is back and has a convoy! They’re trying to find anyone who knows about Eos but are running short of leads. Is there anyone alive who might know more? Find out in Nocterra #7 from Image Comics!

Previously in Nocterra: The Earth has gone completely dark in an event known as the Big PM. Creatures, including many humans, have turned into monstrous Shades who are only repelled by strong light. While trying to save her brother (Emory) from becoming a Shade, ferryman Val Riggs meets a young woman (Bailey) whose grandfather may have been responsible in part for the Big PM, and who is hunted by the fearsome Blacktop Bill. Val saves her brother and they escape from Blacktop Bill, but where can they go next?

SUNDOG CONVOY IS ON THE MOVE!

Nocterra #7, I am happy to say, builds on the first arc, but opens up the world to more adventure with a broader plot. We also get a different point of view, as the primary narrator is Bailey, now known by her call sign of Piper. Where Val discussed the Big PM in terms of her history of vision loss, Piper talks about it in terms of math. She succinctly gives us the rundown of the Big PM, so newcomers to Nocterra will find this a convenient jumping on point.

Sundog Convoy (yes, Val has a convoy now) is hunting. Apparently, some of the smaller Shades are edible. This also gives us a frame with which to introduce the rest of the convoy. Bellwether we met in the last arc. The new characters are Tars, Slab, Nephele, Cali, and Steeno. Emory, their main hunter, catches a critter on the fly, one that is a horrifying cross between a rat, a cat, and a possum and fortunately edible. And we learn that their goal is to save the world.

They head to an outpost known as the Drive-In, an outpost lit by an enormous number of screens. They are trying to backtrack Gus McCray. He is dead, but he had claimed to have a way to bring the light back between an equation he had written, and a place known as Eos, a place where there was light. Like the search for El Dorado, this is the quest of Sundog Convoy.

The Drive-In seems unoccupied. They doubt it was attacked by Shades because it still has unharmed livestock. Emory thinks something feels off. Then they find a boy named Adam. He claims the outpost was attacked by human Shades who not only got much closer to the lights than is usual, but they also dragged people away instead of killing them in place. Emory, who was so close to becoming a Shade that he feels he understands some of their purposes, fears this is part of a greater plan. Then they are attacked by large Shades known as Megas.

In another part of the world, Blacktop Bill is trying to communicate directly with Shades and trying to understand them. He is desperate to find out who or what Nox is. In a moment of cruelty, we see that he waylaid a busload of religious people and killed them, all to use the power from the bus to power the helmet he uses for translation. As he powers down the helmet, he is accosted by three people – three people who are as featurelessly dark as he is. They are all Nocturnes, and they are here to take Bill down. Instead, he dispatches them.

The Megas, who can fly, chase the convoy over a bridge. Slab decides on the fly that they should stop and fight. Bellwether must use her light cannons to blast the Megas away, and Slap and Nephele are knocked over the railing with their truck. They are gone, but the remainder of the convoy is able to get away. But they are rapidly running out of leads.

AMAZING SCENES FROM A FASCINATING WORLD

The art of Nocterra #7 is terrific. The underlying conceit of the story lends itself to some amazing settings. The Drive-In is introduced with a double-page splash which is jaw-dropping and which invites us to linger and take it in. From the outside, it is a wall built of enormous screens, scattered somewhat haphazardly, each showing a different movie or show. Several iconic scenes are visible, connecting us to this world and subverting our idea of movies. Here they are not merely entertainment. They are a wall of protection that also projects defiance.

Blacktop Bill is as awful as ever. For a character who has no discernible features beyond his glaringly white teeth, he has a lot of personality in his silhouette. Where he goes, violence follows. While the art does not show excruciating buckets of blood, it does depict being killed by gun and knife with some jets of blood and some leftover body parts. This is a dark and dangerous world with very serious stakes.

BOTTOM LINE: A THRILLING START TO A NEW ARC

Nocterra #7 makes a triumphant return with a story that feels bigger and even more dangerous than the last arc. I like that we’re also starting to dig more into the mystery of what actually happened to cause the Big PM. Is there actually a way to reverse it, or is that only a MacGuffin? Either way, this is a gripping and fast-paced read.

Sundog Convoy is on the move, but their leads are dwindling rapidly.