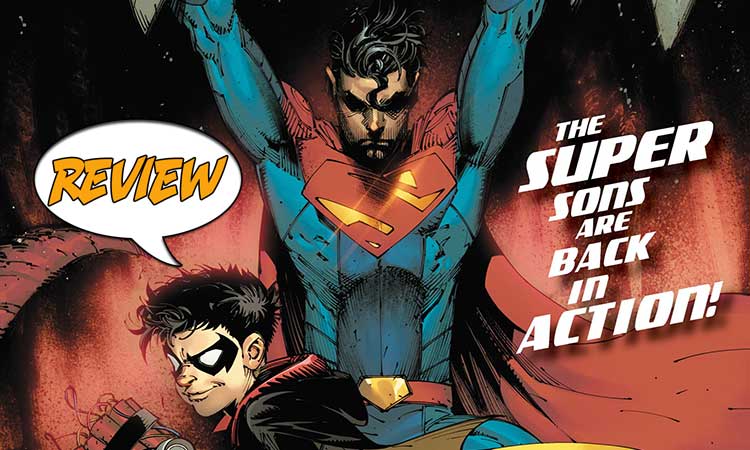 With threats from across time filling up the Fortress of Solitude, it’ll take Jon and Damian’s old shenanigans to make sure everyone is safe. Your Major Spoilers review of Superman & Robin Special #1 from DC Comics awaits!

Previously in Superman and Robin Special: Jon Kent and Damien Wayne are the children of Superman and Batman, respectfully.  The two used to be close friends until a cosmic adventure aged Jon 10 years, but now he’s back on Earth and has taken over his father’s mantle.

SHOWDOWN AT THE FORTRESS OF SOLITUDE

Superman and Robin Special #1 opens in the Fortress of Solitude.  One of the robots who take care of the place is alerted to an energy surge that quickly goes out of control.  Elsewhere, Jon and his mom, Lois Lane, are having a conversation about the pros and cons of keeping an eye on the news or just zoning out.  After Lois leaves, Damian Wayne shows up and informs Jon that he’s aware of alarms going off at The Fortress of Solitude and that they need to go.  The pair make their way to the arctic, where they find a portal formed by a time machine cube where an alien animal has come through and is wreaking havoc.  The two bicker about the best way to handle things, when suddenly a group of nazis also appear through the portal, leaving the pair with more hassle than they bargained for.

REDUNDANT AND KIND OF ANNOYING

First the things this issue gets right. In terms of a no-stakes, action/adventure romp, this is just fine.  There are aliens, there are soldiers, there are superheroes doing super things, and plenty of playful banter to go around.  Also, there are some genuinely sweet moments as Damian and Jon come to terms with the things that have happened to them and what it means for their friendship.  After that though, things start to go south.  First and foremost, this issue doesn’t know if it wants to be a standalone or part of something else.  Regularly through this issue there are little “writer’s notes” explaining where to find explanations in other issues, regarding something that happened on-page.  This isn’t all that uncommon.  But then, the characters themselves go on to explain the plot point as well. This leads to multiple moments when the reader is being told a piece of information, from two sources, in two separate methods, on the same page.  Once you add the fact that dialog designed to sneak in backstory is already clunky, you wind up with a strange issue that is tripping over itself.

Superman and Robin Special #1 spends too much time referencing older issues and establishing its place in the continuity that it almost gets in the way of what is a pretty fun and lighthearted tale.  Unfortunately, while the story was fun, the higher price point of this issue makes it hard to recommend.  There’s just nothing in this issue that comes off as a must-read or justifies being its own special. The reader might be better served just checking out the issues referenced instead. 2 out of 5 stars.

Superman & Robin Special #1 has a decent little adventure tucked away inside of it. To get to it though you have to hack your way through strange continuity clarifications and clumsy dialog.